Hello and welcome back to our regular morning look at private companies, public markets and the gray space in between.

Today we’re peeking at what’s gone on in the world of altcoins recently, the other cryptocurrencies aside from bitcoin.

As 2016 came to a close, altcoins like ether and XRP saw their value soar. Toward the end of 2016 through early 2018, bitcoin’s relative share of the aggregate value of all cryptocurrencies fell to about a third.

Since then there’s been a reversal. Bitcoin is not only back over the 50% market share mark, it has effectively doubled its portion of crypto worth over the last two years.

What happened? Why altcoins have struggled isn’t something we can answer with a single data point or chart. But we can highlight a few reasons that help explain what happened. We’ll start with a look at the data and then we’ll highlight three ideas concerning what changed that pushed altcoins down, and bitcoin back up.

Over the past few weeks we’ve spent most of our time digging into IPOs, larger startups, stocks and revenue thresholds. Today we’re expanding our horizons a bit, looking at a market that sits somewhere to the side of our usual public-private divide. We’re having fun!

Let’s start with a few caveats to save tweets.

We all know that comparing the value of a cryptocurrency or token isn’t the only way to stack blockchains against one another. We also also know that comparing market caps isn’t a perfect way to examine the market. And, yes, there’s lots of development work that goes on behind the scenes that doesn’t show up in the data we are going to examine.

That said, we’re nearly 11 years into the bitcoin era. We care a bit more today than we did a half-decade ago about what is, versus what might be.

From the fine folks over at CoinMarketCap, the following set of data maps the relative value of the major cryptos, with smaller coins aggregated into a shared line: 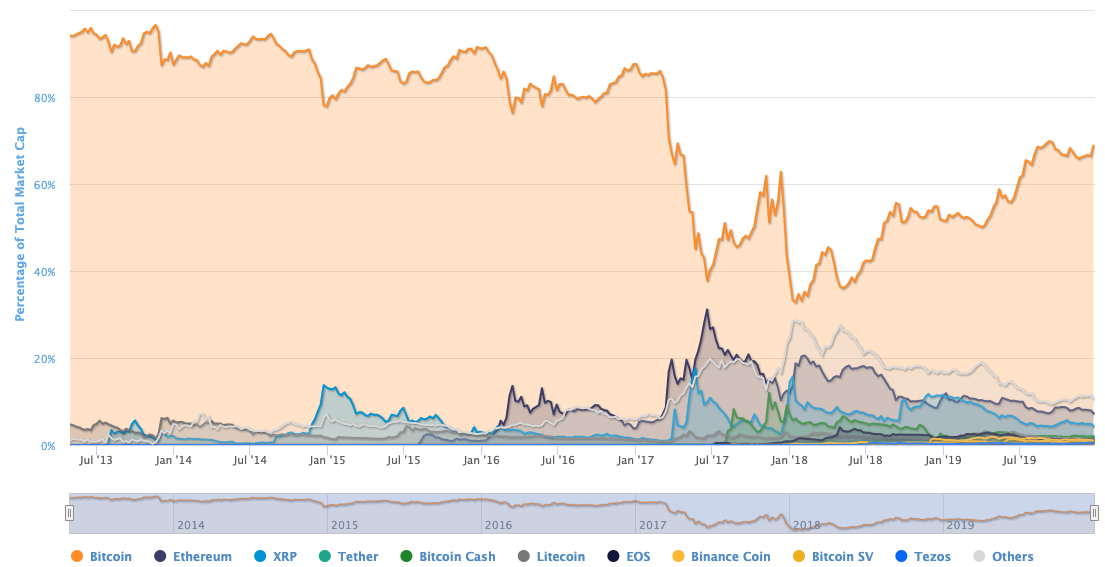 I know it’s the day after a major holiday, so let’s help out. The big orange area is bitcoin. The 2017-2018 era is the period in which altcoins had their heyday. And since mid-2018 you can see bitcoin recapture most of its lost, relative prominence.

Bearing in mind that the value of bitcoin has traded as high as roughly $20,000 in late 2017, and is worth about $7,400 today, the chart does not merely show bitcoin recovering its former value. But it does show how over the last two years bitcoin’s share of the value of traded cryptos has doubled. Here are the key data points:

More simply, bitcoin’s share of the value of all cryptos held steady above 80% for a very long time. Then in early 2017 that same share began to fall. It continued to slip into the early days of 2018. Since then it recovered first to its December 2017 levels. And this year the relative value of bitcoin rose again, bringing it to twice its lowest ratings.

Why did that happen? Here are three reasons that form a part of the why.

There and back again

For those of you with pie to eat, here’s our arguments upfront. Bitcoin bounced back due to: