Mobile consumers worldwide will have downloaded a record 120 billion apps from Apple’s App Store and Google Play by the end of 2019, according to App Annie’s year-end report on app trends. This represents a 5% increase from 2018 — a notable achievement given that the number doesn’t include re-installations or app updates. Consumer spending on apps, meanwhile, approached $90 billion in 2019 across both app stores, up 15% from last year. The new report also examined the year’s biggest apps, including the most downloaded apps and games, as well as the most profitable.

Worldwide, the most downloaded non-game apps remained relatively consistent in 2019, with only one new entry on the list of the most downloaded apps — a short-form video creation and sharing app called Likee, which is benefiting from the overall popularity of short-form video. Elsewhere on the chart, TikTok came in at No. 4, beating out Facebook-owned Instagram, plus Snapchat, Netflix and Spotify.

However, Facebook still owned the top of the charts. Its Messenger app was the most downloaded non-game app of 2019, followed by Facebook’s main app, then WhatsApp.

The top 10 games chart showed more volatility in 2019, as seven out of the top 10 games were new to the chart this year. This included the hyper-casual title Fun Race 3D, as well as the anticipated Call of Duty: Mobile, representing the battle royale genre. While mobile gaming drives the majority of consumer spending on apps, the subscription economy in 2019 played a big role in increasing app revenues, as well.

Specifically, the non-game apps driving revenue growth this year included those in the Photo & Video and Entertainment categories — a trend App Annie predicts will continue in 2020, as new video services, like Disney+, continue to rise. 2020 will additionally see the launch of several other video services, including HBO Max, NBCU’s Peacock and Jeffrey Katzenberg’s Quibi, which could aid in those increases.

Already, many of the top apps are subscription-based, App Annie had previously noted. During the 12 months ending in September 2019, more than 95% of the top 100 non-gaming apps by consumer spend were offering subscriptions through in-app purchases. Publishers’ growing use of subscription services will continue in 2020 to drive consumer spending even higher, the firm says. 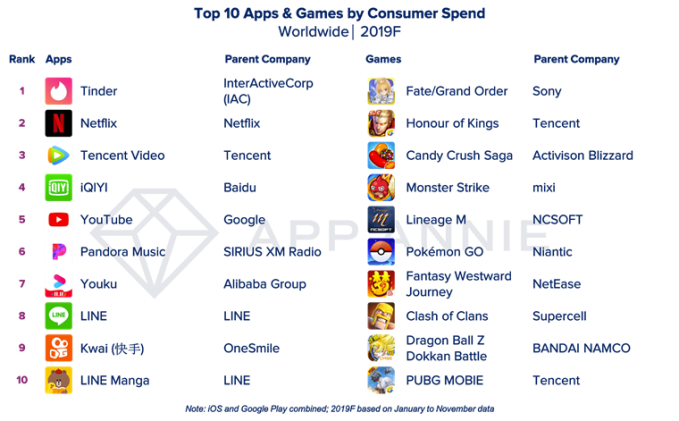 This year, Tinder switched places with Netflix for the No. 1 spot on this chart — last year, it was the other way around. HBO NOW, which saw a surge in spending thanks to “Game of Thrones,” also fell out of the top chart this year, allowing LINE Manga to take its spot. Tencent Video and iQIYI have the same positions as 2018, while YouTube grew from No. 7 to No. 5, and Pandora slipped from No. 5 to No. 6 compared with last year.

App Annie also took a look at a new category of apps that it’s calling the “breakout” apps of the year. These are those that saw the largest absolute growth in downloads or consumer spending between 2018 and 2019. On this list, the No. 7 most-downloaded app of the year, Likee, from YY Inc., becomes the No. 1 “breakout” app of the year, followed by YY Inc.’s Noizz and Helo. Meanwhile, Indian users drove the adoption of social gaming app Hago at No. 4, which is also popular with Gen Z users in Indonesia. 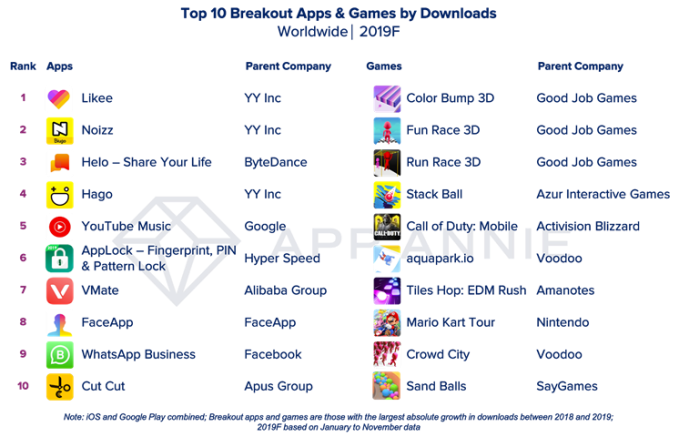 On the gaming side, hyper-casual titles were successful, claiming seven out of 10 slots on the breakout games of the year chart. Hot releases like Mario Kart Tour and Call of Duty: Mobile also appeared. But by consumer spending, core games like No. 1 Game for Peace and No. 2 PUBG Mobile, both published by Tencent, made up the top spots. 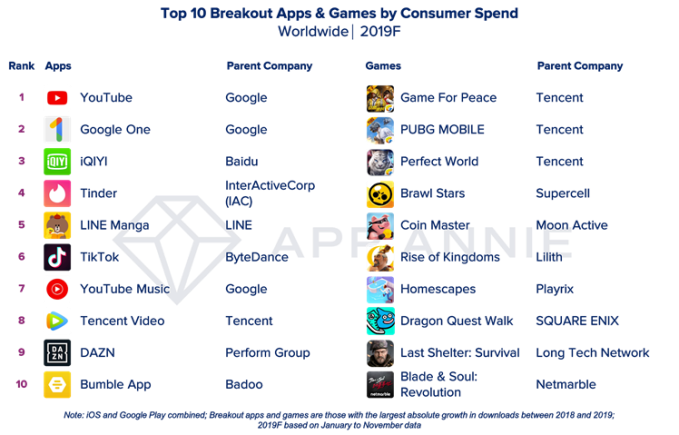