Google Cloud today announced the launch of its new E2 family of compute instances. These new instances, which are meant for general-purpose workloads, offer a significant cost benefit, with saving of around 31% compared to the current N1 general-purpose instances.

The E2 family runs on standard Intel and AMD chips, but as Google notes, they also use a custom CPU scheduler “that dynamically maps virtual CPU and memory to physical CPU and memory to maximize utilization.” In addition, the new system is also smarter about where it places VMs, with the added flexibility to move them to other hosts as necessary. To achieve all of this, Google built a custom CPU scheduler “with significantly better latency guarantees and co-scheduling behavior than Linux’s default scheduler.” The new scheduler promises sub-microsecond wake-up latencies and faster context switching.

That gives Google efficiency gains that it then passes on to users in the form of these savings. Chances are, we will see similar updates to Google’s other instances families over time.

It’s interesting to note that Google is clearly willing to put this offering against that of its competitors. “Unlike comparable options from other cloud providers, E2 VMs can sustain high CPU load without artificial throttling or complicated pricing,” the company writes in today’s announcement. “This performance is the result of years of investment in the Compute Engine virtualization stack and dynamic resource management capabilities.” It’ll be interesting to see some benchmarks that pit the E2 family against similar offerings from AWS and Azure. 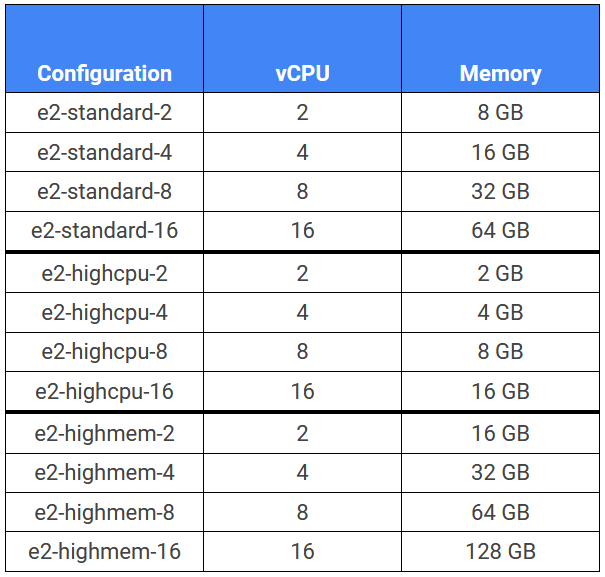 As usual, Google offers a set of predefined instance configurations, ranging from 2 vCPUs with 8 GB of memory to 16 vCPUs and 128 GB of memory. For very small workloads, Google Cloud is also launching a set of E2-based instances that are similar to the existing f1-micro and g1-small machine types. These feature 2 vCPUs, 1 to 4 GB of RAM and a baseline CPU performance that ranges from the equivalent of 0.125 vCPUs to 0.5 vCPUs.