Streaming aggregator Reelgood capitalized on the overabundance of streaming services available today by offering consumers a universal dashboard where you can track what you’re watching and discover your next binge. It then translated the activity from its over 10 million users into data it licenses to major companies, including Roku, Microsoft, smart TV makers, NYPost and even hedge funds. Now the company has closed on $6.75 million in Series A funding to continue to grow its business.

The round was led by Runa Capital and includes participation from Reelgood’s seed round investor, August Capital. To date, Reelgood has raised $11 million.

The company’s app to some extent competes with those designed to help you keep track of the episodes you’ve watched across streaming services and TV, like TV Time, iTV, JustWatch and others. But Reelgood’s service stands out for its breadth of catalog — it tracks both movies and TV across some 336 streaming services, the website says. This includes free services like Tubi, Crackle and those from TV networks, plus authenticated “TV Everywhere” services for pay-TV subscribers, and subscription services like Netflix, Hulu, HBO, Amazon Prime and others. It also can help you compare prices on rental options.

And its robust search and filtering features can help you find titles that are new, coming or leaving services, or by any other filter — like genre, year, Rotten Tomatoes rating, IMDB score and more. The more you use and personalize the service, the better its suggestions for what to watch next then become.

Once you find something to watch, you just press play to launch the streaming service’s app or website.

The work involved in making a simple concept — a universal dashboard for streaming — is fairly complex, Reelgood says.

Reelgood also touts the quality of its data (averaging 98% across all 300+ services), which it then licenses to publishers, search engines, media players, TVs, voice assistants and other smart devices. Currently, the company has around 50 business customers who pay either for the raw data, the insights or both. 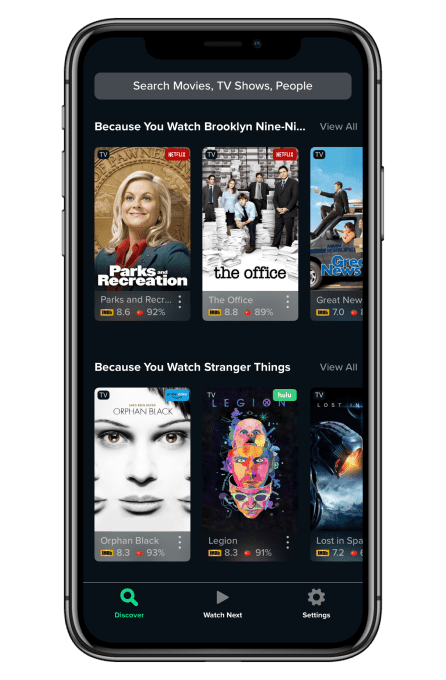 Roku, for example, uses Reelgood’s data for its own universal search feature. NYPost displays streaming availability data on their articles via a widget. Hedge funds look at the data to better understand consumer behavior in streaming services and the movement of content between catalogs.

“I sought out and joined Reelgood because they are poised to capture the billions in revenue spent on viewership data as viewing continues to shift towards OTT,” said Green.

The additional funding will be used to expand the number of platforms where Reelgood is offered, including on a range of smart TVs through partnerships. The company has signed five smart TV deals with major brands that will begin to roll out in 2020, but LG is the only name Reelgood can currently disclose.

Reelgood is headquartered in San Francisco. It has 18 employees, both local and remote, and is hiring across a number of roles.