Google is expanding its suite of “Digital Wellbeing” tools for Android devices with a new feature, Focus Mode, launching today. This feature allows users to turn off distractions — like social media updates or email notifications — for a period of time, so you can get things done without interruption. Focus Mode was first announced at Google’s I/O developer conference this May, and has been in beta testing until now, Google says.

Unlike Do Not Disturb, which can mute sounds, stop vibrations and block visual disturbances, Focus Mode is only about silencing specific apps.

Within the Digital Wellbeing settings, users select which apps they find most distracting — like Facebook, YouTube, Gmail, games or anything else that tends to steal their attention. These apps can be paused temporarily, which stops those apps’ notifications. Plus, if you try to open the app, Focus Mode reminds you they’re paused.

During beta testing, Google said tester feedback led to the creation of a new enhancement for Focus Mode: the ability to set a schedule for your app breaks. This allows you to continually block app notifications for the days and times you choose — like your 9 AM to 5 PM working hours, for example.

There’s also a new option to take a break from Focus Mode, which allows you to use the blocked apps for a time, then return to Focus Mode without entirely disabling it to do so. In addition, if you finish your work or other tasks early one day, you can now turn off Focus Mode for that day without breaking its ongoing weekly schedule.

The Focus Mode feature is one of now many investments Google has made into its comprehensive Digital Wellbeing feature set, which was originally introduced at Google I/O 2018 but initially only on Pixel devices. Since then, Google has expanded access to Digital Wellbeing features and further integrated its features — including parent control app Family Link — into the Android OS. 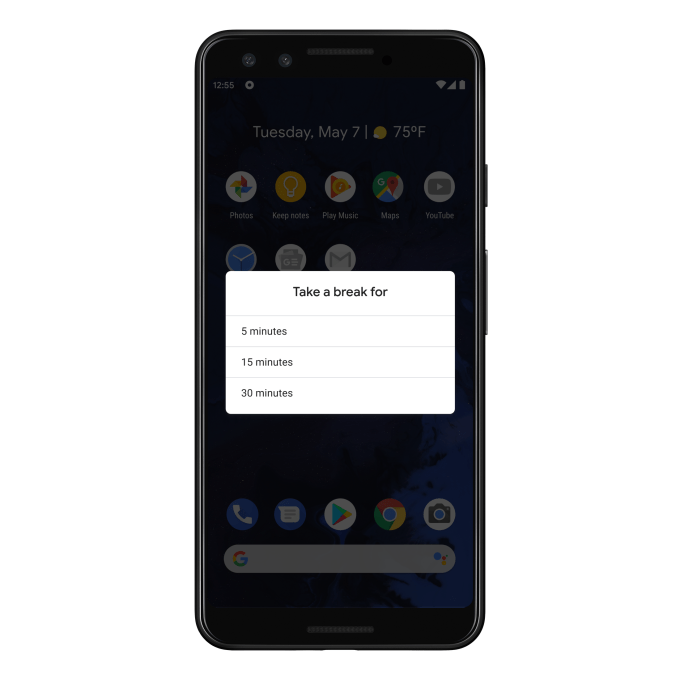 It has also developed digital well-being apps outside of its core Digital Wellbeing product, with October’s launch of a handful of well-being experiments. This set of apps included a notification mailbox, unlock clock and even an easy way to print important information from your phone so you don’t have to keep checking your device throughout the day, among other things.

Elsewhere across Google’s product line it has developed settings and controls devoted to well-being, like YouTube’s reminders to “take a break,” automations for Gmail, downtime settings for Google Home and more.

Google says the new version of Focus Mode exits beta testing today and is rolling out to all devices that support Digital Wellbeing and parental controls, including Android 9 and 10 phones.