An argument could be made that Google has over-indulged in its creation of way too many messaging apps in years past. But today’s launch of a new messaging service — this time within the confines of Google Photos — is an integration that actually makes sense.

The company is rolling out a way to directly message photos and chat with another user or users within the Google Photos app. The addition will allow users to quickly and easily share those one-off photos or videos with another person, instead of taking additional steps to build a shared album.

The feature itself is simple to use. After selecting a photo and tapping share, you can now choose a new option, “Send in Google Photos.” You can then tap on the icon of your most frequent contacts or search for a user by name, phone number or email.

The recipient will need a Google account to receive the photos, however, because they’ll need to sign in to view the conversation. That may limit the feature to some extent, as not everyone is a Google user. But with now a billion-some Google Photos users out there, it’s likely that more of the people you want to share with will have an account, rather than not.

You also can use this feature to start a group chat by selecting “New group,” then adding recipients.

Once a chat has been started, you can return to it at any time from the “Sharing” tab in Google Photos. Here, you’ll be able to see the photos and videos you each shared, comments, text chats and likes. You also can save the photos you want to your phone or tap on the “All Photos” option to see just the photos themselves without the conversations surrounding them. 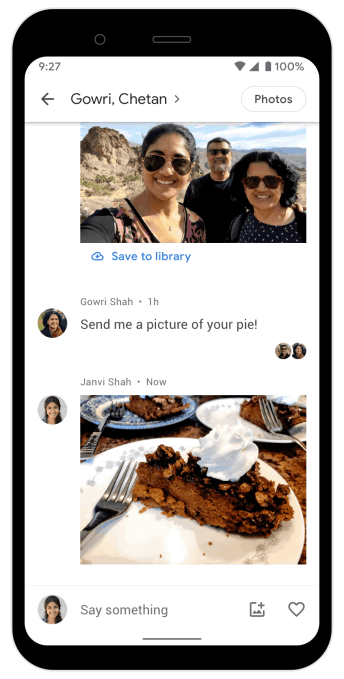 Explains Google, the idea with the new direct sharing option is not to replace users’ preferred messaging apps — a strategy that differs from Google’s investments in apps like Hangouts and Allo in previous years. Instead, the feature wants to relocate to Google Photos some of the photo-sharing activity that takes place in messaging apps.

Google had tried a similar idea with direct video sharing and messaging from the YouTube app. But the company later shut down that feature ahead of YouTube’s announcement of the $170 million FTC fine for violating U.S. children’s privacy laws (COPPA). Likely, the chat feature there would have complicated YouTube’s product, now under increased regulatory scrutiny, because many kids were using direct messaging as a way to work around parental controls and other blocks on traditional messaging apps.

Google Photos makes more sense as a place to directly message friends and family, though, and the Google account requirement means users will have to be 13 or older to gain access. (Unless parents created a Google account for their child).

Direct messaging was previously announced as “coming soon” alongside Google Photos’ big fall update that also included the launch of Stories and other features.

The new feature is launching today but the rollout will take place over the next week. It will be supported across platforms, including iOS, Android and web.