Canalys released its latest cloud infrastructure spending numbers for China today, and it’s all trending upward. For starters, the market reached $2.9 billion for the quarter, an increase of 60.8%. China now accounts for 10.4% of worldwide cloud spending, meaning it’s second only to the U.S. in overall spending.

That is pretty amazing, given that China was late in coming to the cloud, but also not surprising given the sheer size of the overall potential market. Once it got going, it was bound to gain momentum simply because of that size. Still, it is surprising that it is three times the size in terms of market share of the next closest country, according to Canalys.

Most of the business is going to Chinese cloud companies. Alibaba, which, like Amazon, has a retail arm and a cloud arm, leads the way by far, with 45% of the market share (worth $1.3 billion). Tencent is second, with 18.6%, followed by AWS with 8.6% and Baidu with 8.2%. AWS was the only non-Chinese company to register any market share. 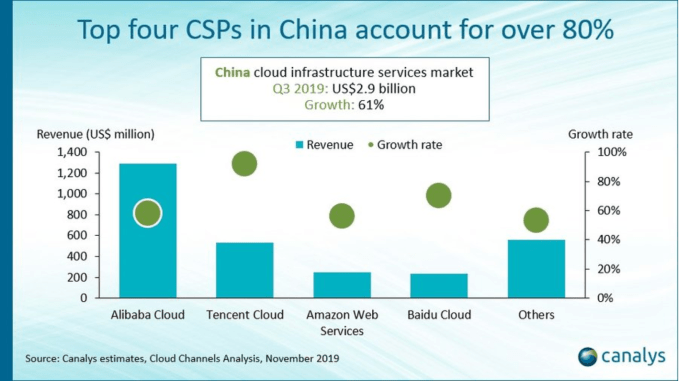 “With this growing demand, cloud service providers are having to differentiate themselves in a highly competitive environment. One of the key emerging differentiators, especially among local cloud service providers, is the development of artificial intelligence (AI) capabilities, either as a service or embedded in their own offerings. AI for facial recognition is already widely used across the country in many smart city deployments and will be a key part of healthcare, retail, finance, transport and industry cloud solutions,” he said in a statement.