When Alibaba reported its earnings yesterday, the cloud data got a bit buried in other stories, but it’s worth pointing out that its cloud business grew 93 percent in the most recent quarter to $710 million. That’s down a smidgen from the gaudy triple digit growth of last report, but their market share has doubled in just two years, and they are growing fast.

As John Dinsdale, principal analyst at Synergy Research, a firm that keeps a close eye on the cloud market points out, the dip in growth is all about the law of large numbers. Alibaba couldn’t sustain triple digit growth for long.

“Microsoft Azure and Google Cloud Platform have recently seen similar reductions in growth rates, and if you go back far enough in time, AWS did too. The key thing is that the market for cloud infrastructure services is now very big, yet is still growing by 50% per year — and the leading players are either maintaining or growing their market share,” he said.

Back in 2015, when the Chinese eCommerce giant launched a big cloud push as part of an effort to expand beyond its eCommerce roots, Alibaba Cloud’s president Simon Hu bragged to Reuters, “Our goal is to overtake Amazon in four years, whether that’s in customers, technology, or worldwide scale.”

That is obviously not happening, but the company has managed to move the market share needle, doubling from just 2 percent of worldwide cloud infrastructure market share in 2016 to 4 percent today. That’s nothing to sneeze at, according to Dinsdale, but it’s also worth pointing out that most that business is in Asia, and of that, most of it is in its native China. 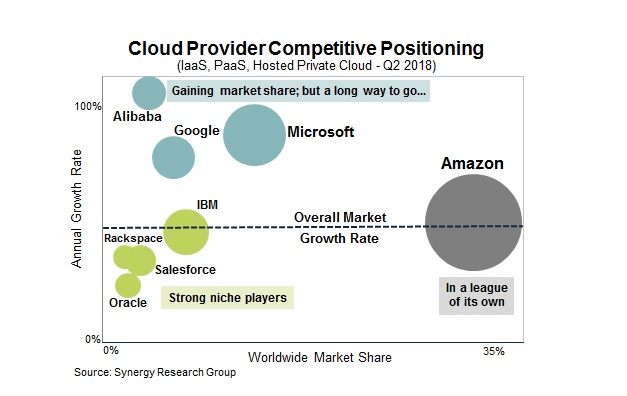 Like all its cloud competitors, the company is concentrating on some key technologies to drive that growth including big data analytics, artificial intelligence, security and Internet-of-Things, all of which are resource intensive and help grow revenue quickly.

To sustain its growth, however, Alibaba needs to begin to develop markets outside of China  and Asia. Dinsdale thinks that could happen as Chinese customers expand internationally. He also recognizes the political realities that the company faces as it tries to move into western markets. “Alibaba has what it takes to seriously challenge the top four cloud providers — despite some inevitable political headwinds that it will face,” he said.

While Alibaba might not reach the lofty heights of catching AWS any time soon, or probably ever, it has a good shot at IBM and Google Cloud Platform and for a company that just started taking the cloud market seriously in 2015, that’s amazing progress.