Organizations are always looking for new ways to work more efficiently, but too often the problem is that, in a digital-first environment, they have to get in line to ask their in-house IT experts (or even more expensively, external consultants) to build those solutions for them. To underscore the demand for a better approach, today a startup that has constructed a way around that, specifically in the world of app integrations, is announcing a sizeable round of funding.

Tray.io, which has built a “general” workflow automation platform that uses a graphical interface to let anyone integrate APIs between two or more apps to create new ways of working with data across them, has raised $50 million in funding, at a valuation that a source close to the company tells me is over $600 million post-money.

The funding, a Series C, is being led by Meritech Capital, with previous investors Spark Capital, GGV Capital, and True Ventures also participating. It brings the total raised by Tray.io to just under $110 million and is notable for coming just five months after its previous round, a Series B of $37 million.

“Since we started the company we’ve been very fortunate with what’s happened in the tech world,” CEO and co-founder Rich Waldron said in an interview last week while visiting London when asked about the funding.

He said that in addition to acquisition approaches (from a number of household names) there were offers of more money coming in almost immediately after the last round closed, and the startup decided that making hay while the sun shines — that is, taking the money when it’s offered, since you don’t know what will happen tomorrow — was the right approach. 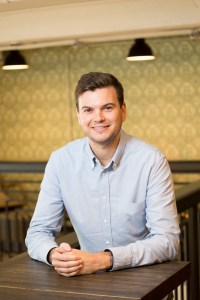 “It took us five years to build the company, and we seeded it slowly, but in the last 18 months things have exploded.” As for the sparks for that explosion, he credits the trajectories of companies like Twilio and Stripe, two other tech companies that have built large businesses on, and raised public awareness of, APIs creating new worlds of functionality; and signing on IBM as a partner: the company created a number of new integrations on the platform, some of which became standards that now other companies are using daily.

It’s been a big journey for the startup. Tray.io started out years ago with just a handful of integrations, mostly “email-centric” features, as Waldron describes them, allowing people, for example, to import data from Mailchimp into Slack to track email marketing campaigns. Now, the company provides integrations for some 400 apps, with customers ranging from small startups through to the likes of IBM, and it’s continuing to grow.

The company — which has no “free” tier, with integration packages starting at $595 per month — says that ARR is up by more than 500% this year (it does not disclose actual revenue numbers) — and its customer base is up by 37% with VMWare, Pearson, Bain & Company, Zendesk, and Udemy, SAP, Arrow Electronics, Lexmark, and New Relic among those using its services.

The company is now also providing a white-label version of its platform, Tray Embedded, which third parties can offer to their customers to manage integrations in their own environments.

Altogether the company today processes about 10 billion tasks each month.

Tray.io’s rise comes on the heels of a wider trend. When it comes to some of the prime ways that enterprises are leveraging the advances of technology to improve how they work, integration and automation are the name of the game: bringing data out of silos, and doing so in an instant way, speeds up operations, reduces human error and can also help with costs.

It’s not the only company working in this area, or to take the approach that technology should be accessible and used by more than just engineers another tech employees.

Others working in the automation and integration space include Snaplogic (which raised $72 million in October), Dell’s Boomi, and Workato (which itself raised $70 million earlier this month and now has a valuation of $500 million, according to PitchBook data).

Rich Waldron, Tray.io’s CEO and co-founder, said that the company likes to think of itself as something in between Mulesoft (now a part of Salesforce) and Zapier, which somewhat also puts those two companies also into the wider category of competitors.

Other non-consumer startups that are also tackling the idea of providing tech tools to non-technical employees include Airtable, Parabola, DashDash, the AI-based data parser for unstructured contracts and other legal documents Eigen, and many more.

But around all of these, Tray.io’s investors believe they have backed one of the winning horses.

“General automation is showing nonstop momentum in a software-heavy marketplace that’s hungry for integration support and efficiency lift,” explained Alex Kurland of Meritech Capital, in a statement. “The increasingly urgent need to provide a personalized and cohesive customer experience across the entire buying journey demands ongoing digital transformation. To have any hope of scaling with the exponential increase in new software and new customer data in play, companies need to take full ownership of every piece of that data with general automation. Not just in IT, but for line-of-business roles in marketing, sales, support, HR, finance, and many others across the entire organization. There’s no limit to the upside for general automation in today’s marketplace, and Tray.io is the undisputed leader in the category.”

The origin story of the startup is a notable one for those wondering how and if ecosystems can evolve.

I first met Tray.io when it was still a small startup working at a few desks donated to it by UsTwo in Shoreditch, London. The company had just raised a seed round and was on its way to relocating to San Francisco to take its growth up a gear.

That in itself was a significant stage of progress for the company: Waldron said that when he and co-founders Alistair Russell and Dominic Lewis had trouble raising its earliest funding prior to that, they financed the startup for several months by selling Wellington boots (Hunters mostly, purchased wholesale) on sites like eBay to people “during the festival season.”

Tray.io was — in the literal and figurative sense — a bootstrapped startup.

Eventually the company went through a couple of accelerators, Angelpad and Techstars, and started to catch the eye of angel investors — Passion Capital, Ballpark Ventures, Firestartr, Andy McLoughlin, Tom Hulme, Ustwo founders Mills and Sinx, FIG and Richard Fearn — who collectively put $600,000 into the startup. The seed round that I wrote about, interestingly, had come with a rider: move to San Francisco if you want the money.

“The terms that we were getting in the UK for the seed round were not good,” Waldron said. “It would have hindered our growth. But it’s not the same now. There is an amazing set of companies in the UK, building deep tech and more. This feels like the new model: you can really think big and make it.”

The startup has kept its R&D here in the UK and will continue to build out its office too, even as its HQ remains in SF.