Establishing an enduring presence on the Moon will mean making a lot of landings — and NASA researchers want to make those landings as reliable and cheap as possible. This robotic “pallet lander” concept would be a dead simple (as lunar landers go) way to put up to 300 kilograms of rover and payload onto the Moon’s surface.

Detailed in a technical paper published today, the lander is a sort of space pallet: a strong, basic framework that could be a unit in many a future mission. It’s still a concept and doesn’t really have a name, so space pallet will do for now.

It’s an evolution of a design that emerged in studies surrounding the VIPER mission that was intended to “minimized cost and schedule” and just get the rover to the surface safely. In a rare admission of (at least theoretically) putting cost over performance, the paper’s introduction reads:

The design of the lander was based on a minimum set of level 1 requirements where traditional risk, mass, and performance trade parameters were weighed lower than cost. In other words, the team did not sacrifice ‘good enough’ for ‘better’ or ‘best.’

It should be noted, of course, that “good enough” hardly implies a slapdash job in the context of lunar landers. It just means that getting 5 percent more tensile strength from a material that costs 50 times more wasn’t considered a worthwhile trade-off. Same reason we don’t use ebony or elm for regular pallets. Instead they’re using the space travel equivalent of solid pine boards that have been tested into the ground. (The team does admit to extrapolating a little but emphasizes that this is first and foremost a realistic approach.)

“While most subsystems use off-the-shelf parts, one emerging technology needed for a lander like this would be Terrain Relative Navigation used for precision landing,” said Logan Kennedy, lead systems engineer for the concept. “Testing is under way!”

The space pallet would go up aboard a commercial launch vehicle, such as a Dragon atop a Falcon 9 rocket. The vehicle would get the pallet and its rover payload into a trans-lunar injection trajectory, and a few days later the space pallet would perform the necessary landing maneuvers: attitude control, landing site selection, braking, and a soft touchdown with the rover’s solar panels facing the sun. 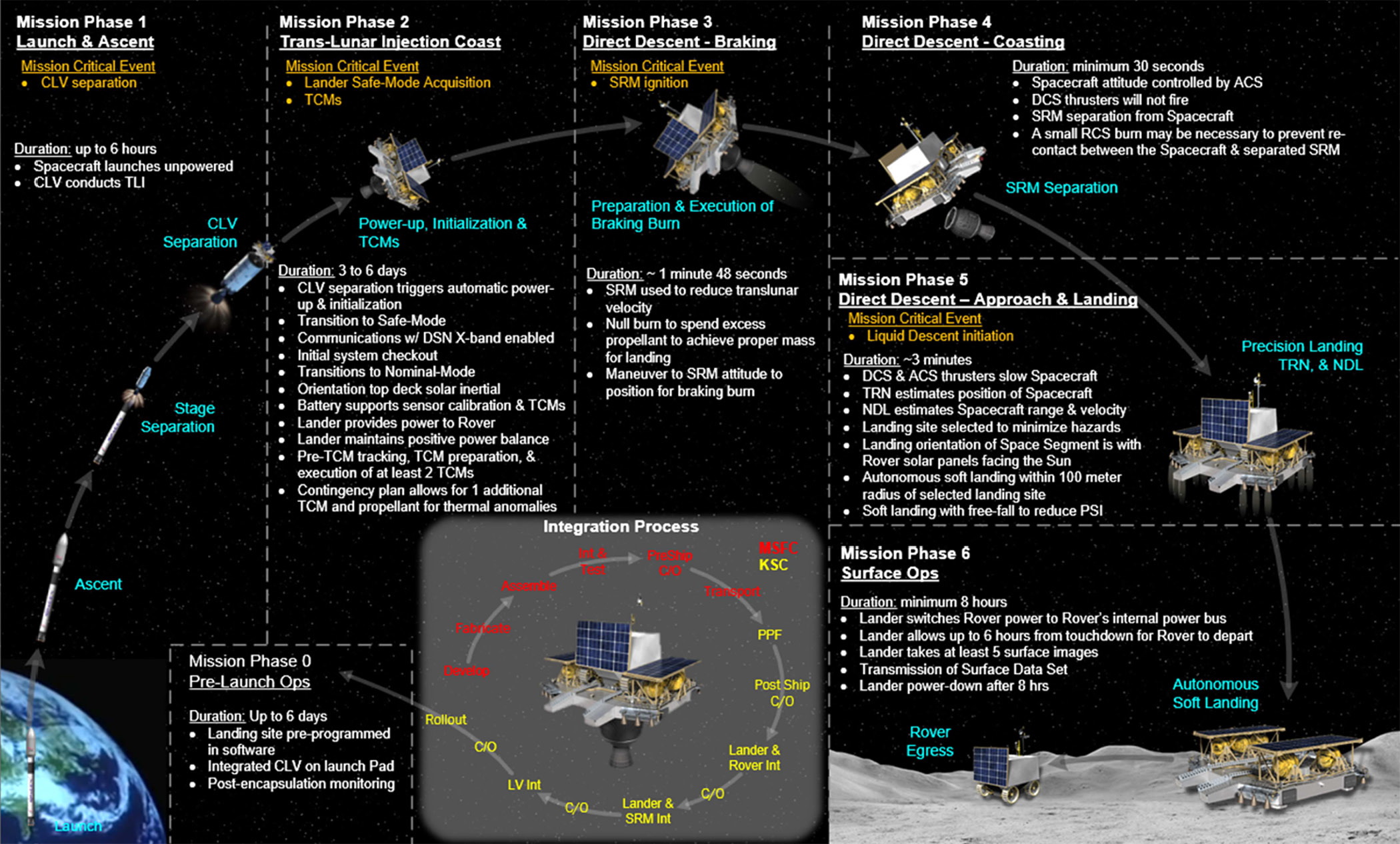 Once on the surface, the rover would go on its merry way at some point in the next couple hours. The lander would take a few surface images and characterize its surroundings for the team on Earth, then shut down permanently after 8 hours or so.

Yes, unfortunately the space pallet is not intended to survive the lunar night, the researchers point out. Though any presence on the moon’s surface is a powerful resource, it’s expensive to provide the kind of power and heating infrastructure that would let the lander live through the freezing, airless cold of the Moon’s weeks-long night.

Still, it’s possible that the craft could be equipped with some low-key, self-sustaining science experiments or hardware that could be of use to others later — a passive beacon for navigation, perhaps, or an intermittent seismic sensor that detect nearby meteorite impacts.

“One concept involved unfolding solar panels to last for a whole lunar day (~14 Earth days) and technology exists to survive the lunar night and even longer,” said Kennedy in response to a question about putting science instruments on board. “NASA’s Science Mission Directorate aims to take advantage of all opportunities for science investigations and intends to provide scientific experiments/instruments for all landers traveling to the lunar surface as long as they align with our needs and goals.”

Even should the space pallet not be pursued further than concept stage, the team writes in the paper, “it is important to note that these and other derived technologies are extensible to other lander designs and missions.”