The numbers and presentation reflected some of the same past trends, with a dash of new, and nary a mention of a declining share price.

Jumia — with online goods and service verticals in 14 countries — posted third-quarter revenue growth of 19% (€40 million) and increased its active customer base 56% to 5.5 million from 3.5 million over the same period a year ago.

This is significant, as the company has committed to generate more revenues from digital payment products and offer JumiaPay as a standalone service across Africa.

The overall pattern of growing revenues and customers YoY has been consistent for Jumia.

Jumia pegged a large part of the spike in losses to an increase in fulfillment expenses due to more cross-border goods transactions (with higher shipping costs) on its platform in 3Q 2019.

Jumia introduced some new methodologies and measures for its results. “We believe the most relevant monetization metrics for us are market-based revenue and gross profit,” Jumia Group CFO Antoine Maillet-Mezeray explained on the call.

“We don’t see revenue as a meaningful metric to assess the monetization of our business as it is impacted by shifts in the revenue mix between first party and marketplace,” he said.

If and when Jumia does get into the black, I suspect revenue will shift back as key.

On its path to profitability, Jumia CEO Sacha Poignonnec reaffirmed the company’s commitment to generate more revenue from higher margin (straight through) products, such as JumiaPay and Jumia’s classified business, over cost-intensive (and logistically complicated) online goods sales.

“We are focused on driving the adoption and penetration of Jumia pay within our own ecosystem,” he said — meaning across Jumia’s existing buyer-seller universe.

Since its founding in 2012, the company has been forced to adapt to slower digital payments integration in its core market Nigeria and allow cash-on-delivery payments, which are costly and more problematic than digital processing.

Poignonnec highlighted Jumia’s commitment to build a financial services marketplace (and revenues) from consumers and partners using JumiaPay and JumiaLending for products such as loans, third-party credit-scoring and insurance. This has led to Jumia moving into working-capital services for vendors on its platform.

On the movement of online goods, Jumia highlighted the expansion of its JumiaMall service, which offers brands — such as L’Oreal, Samsung and Unliver — more tailored selling options on its website around shipping, product positioning and consumer data analytics. 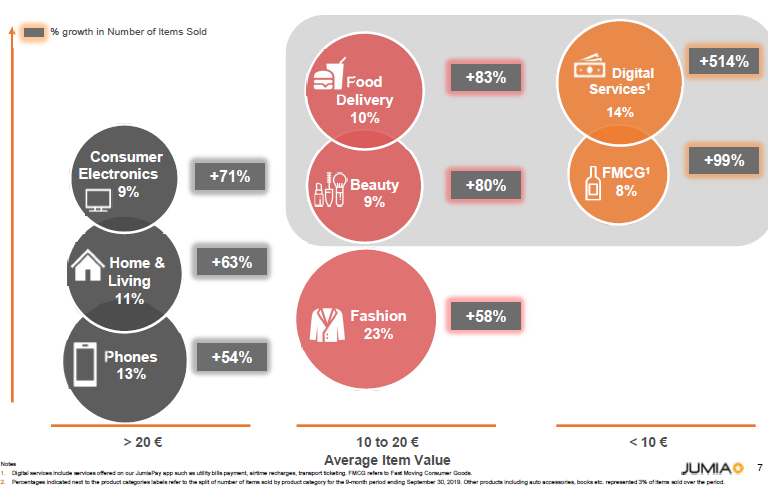 Surprisingly absent from Jumia’s earnings call and the subsequent Q&A was any discussion of the company’s share price.

Today’s reporting was slightly more anticipated, given Jumia has faced a short-seller assault, sales scandal and significant market-cap drop since its April IPO on the NYSE.

The online retailer gained investor confidence out of the gate, more than doubling its $14.50 opening share price after the IPO.

That lasted until May, when Jumia’s stock came under attack from short-seller Andrew Left, whose firm Citron Research issued a report accusing the company of fraud. That prompted several securities-related lawsuits against Jumia. 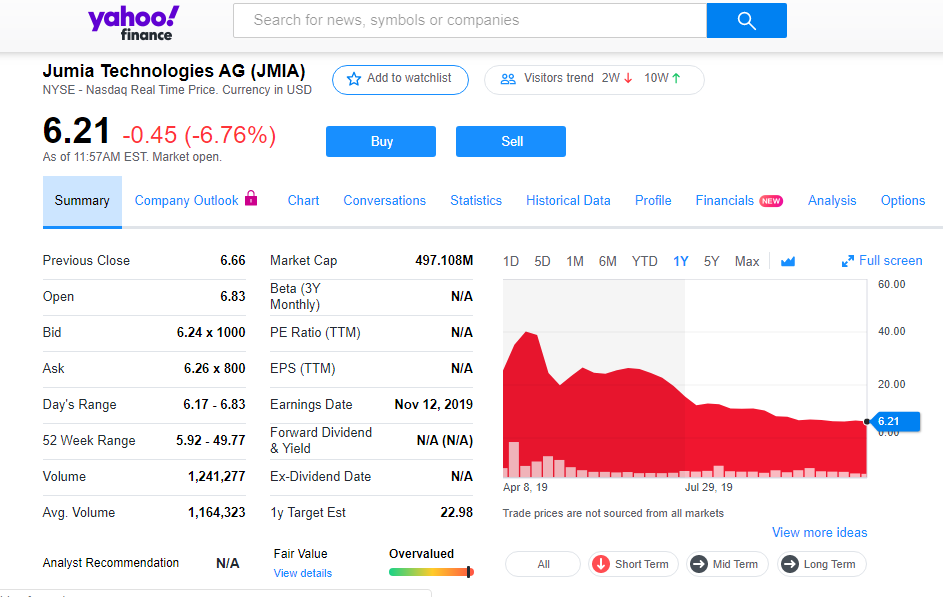 Then on its second-quarter earnings call in August, Jumia offered greater detail on the fraud perpetrated by some employees and agents of its JForce sales program.

The company declared the matter closed, but Jumia’s stock price plummeted more after the August earnings call (and sales-fraud disclosure), and has lingered in the $6 range for weeks.

That’s 50% below the company’s IPO opening in April and 80% below its high.

Jumia can offer new metrics to evaluate its performance, but the simplest measure — the ability to generate revenues in excess of costs to turn a profit — will still apply.

The sooner Jumia can go in that direction the faster it can revive its share price and investor confidence.