For Pan-African e-commerce startup Jumia, going public has been an up and down affair.

The company filed SEC IPO docs in March and saw its share rise 70% after listing on the NYSE in April at $14.50. Then last week, Jumia’s stock tumbled when it came under assault from a short-seller accusing the company of fraud.

This occurred against the backdrop of a debate playing out across Africa’s tech ecosystem on Jumia’s legitimacy as an African startup, and set the stage for the company’s first post-IPO earnings call on Monday.

There’s a lot to unpack around Jumia, and the first item out of the vault is its Q1 results.

Key takeaways were that Jumia’s Gross Merchandise Value (GMV) — the total amount of goods sold over the period — grew by 58% to €240 million. Other highlights included marketplace revenue growth of 102% to €16 million, and gross profits as a percentage of GMV growth of 6.5% in Q1 2019 versus the same period in 2018.

So the startup’s still losing money — see the big losses reported in the IPO filing — but is improving its ability to earn.

“GMV is not the end all but it’s…a starting point because to generate revenue it’s gotta start with GMV,” Citibank Frontier Markets Analyst Andrew Howell told TechCrunch. “The side that was less…encouraging was the expenses are still very high,” he said. 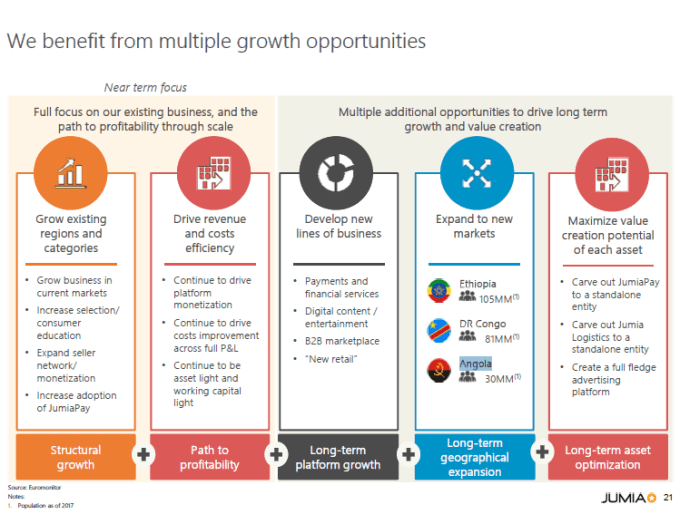 Jumia also shared a longer-term revenue strategy on its Q1 earnings call toward converting its JumiaPay and Jumia Logistics capabilities to standalone services across Africa.

Speaking to TechCrunch, Left said he had found “major discrepancies in the key performance metrics, the amount of customers, also the amount of vendors [reported], which, when you’re talking about e-commerce, are the most important things.”

Citron Research’s report, published May 9, makes a number of critical claims regarding Jumia, but the one it labels “the smoking gun” refers to material discrepancies between an October 2018, Jumia confidential investor presentation it obtained and Jumia’s April 2019 SEC Form F-1. 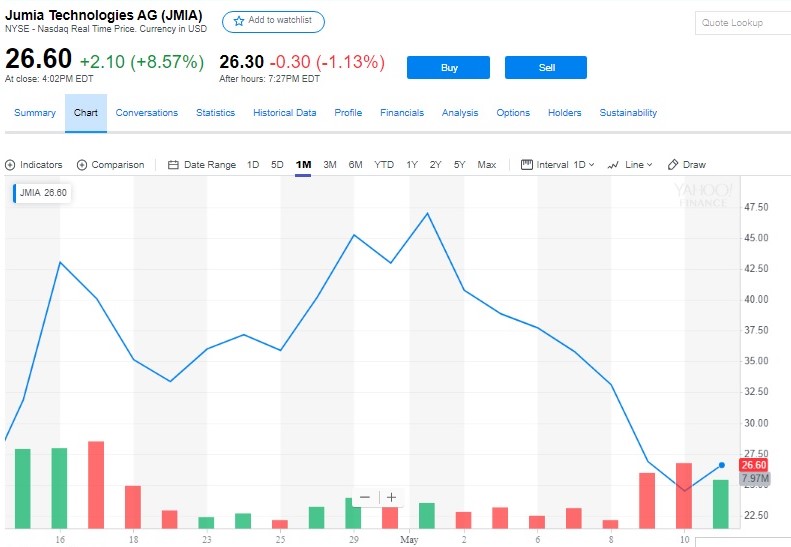 Left confirmed to TechCrunch that he holds short positions in Jumia’s stock — which means he could benefit financially from declines in Jumia’s share value. The company’s stock dropped 26% last week after the Citron Research report published.

On Monday’s earnings call, Sacha Poignonnec responded to Citron’s report, saying that “Jumia stands by our prospectus and audited financials…and will not be distracted by those who look to create doubt, to profit at our expense and that of our long-term stakeholders.” He later took to media and refuted claims as “market rumors rather than facts.”

Citibank analyst Andrew Howell published his own response to the Citron Research (now bouncing around on social media). On Left’s material discrepancy claims regarding active consumers and merchants, Howell pointed to Jumia’s explanation of different calculations across the reporting documents, one being net and the latter gross. “It’s perfectly reasonable; a legitimate distinction,” Howell told TechCrunch, adding that he didn’t see Left’s claims of securities fraud as credible.

Jumia’s path from becoming Africa’s first startup unicorn to listing on a global exchange to issuing its first-earnings release has been a bit dramatic.

Things to watch moving forward include whether the startup can finally generate profits and ROI. Now that Jumia’s publicly traded, we’ll have a quarterly snapshot (and analyst reporting) on its progress (or not) toward that endeavor.

Jumia’s pivot to offer its JumiaPay and classifieds services more broadly across Africa could make it a competitor in the continent’s fintech space and improve its revenues versus expenses, since digital payments and ads have higher margins than B2C e-commerce.

And eyes will be on whether Citron Research’s fraud claims and short-sell position escalate.

In response to a TechCrunch inquiry, an SEC spokesperson declined to comment on whether there is any active investigation into Jumia based on Left’s reporting.

On the possibility of taking legal action against Citron Research, Jumia CEO Sacha Poignonnec did not rule it out, telling TechCrunch, “We are considering our options.”

And on the prospect of recourse, “Tell Jumia if they have a problem with my report go ahead and sue me,” Left told TechCrunch.