Is it the web page that’s slow or is it your network connection? In the future, Google’s Chrome web browser may have an answer for you. Google announced today a plan to identify and label websites that typically load slowly by way of clear badging. The company says it may later choose to identify sites that are likely to be slow based on the user’s device and current network conditions, as well.

Google hasn’t yet determined how exactly the slow websites will be labeled, but says it may experiment with different options to see which makes the most sense.

For example, a slow-loading website may show a “Loading…” page that includes a warning, like a caution icon and text that reads “usually loads slow.” Meanwhile, a fast website may display a green progress indicator bar at the top of the page instead of a blue one.

And for links, Chrome may use the context menu to help users know if the site will be slow so you can decide whether or not you want to click. 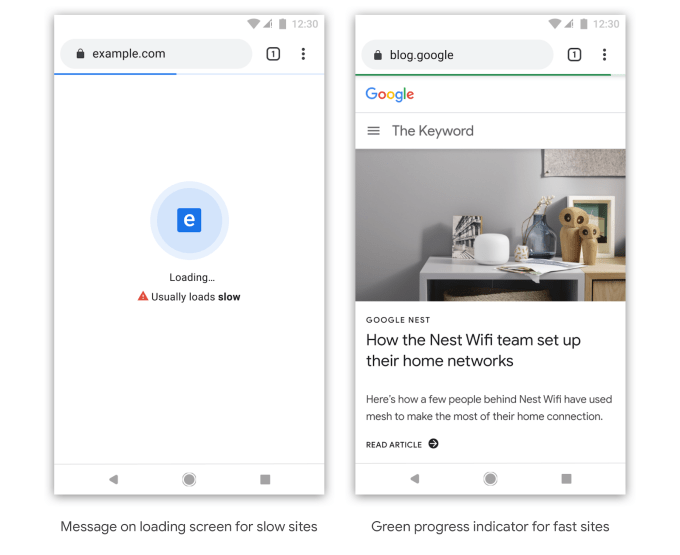 In the long-term, Chrome’s goal will be to identify and badge websites offering “high-quality” experiences, which may include other factors beyond just the website’s speed. The company didn’t yet detail what those other factors may be, but says the identification process will include more stringent criteria that’s rolled out gradually over time. However, the goal will be to make these “good user experiences” something any web developer can achieve.

A faster, more usable web benefits Google, as it helps the company better cater to its primarily mobile users. Since 2015, the majority of Google users start their searches from mobile devices. But that shift has required new ways of indexing and ranking pages and serving users whose connection speeds vary and who may not have powerful devices.

Google now uses a website’s mobile version when indexing its pages, and it offers fast AMP pages to help mobile users get to information more quickly. It makes sense that a next step would be to nudge site owners themselves to speed things up or risk getting labeled as a “slow” website.

This sort of feature would particularly help Google users in emerging markets, like India, where decent bandwidth is often lacking and low-end smartphones are prevalent.

“Speed has been one of Chrome’s core principles since the beginning – we’re constantly working to give users an experience that is instant as they browse the web,” a Chrome blog post explained. “That said, we have all visited web pages we thought would load fast, only to be met by an experience that could have been better. We think the web can do better…,” it read.

The plans were announced at the Chrome Developer Summit, alongside other developer-focused updates. This included a preview of “Web Bundles,” an API that lets developers distribute web content across any format, like email, FTP or even USB. Plus, Portals, a web experience previously announced at Google I/O, was demonstrated with early partner Fandango.