Spotify’s simple podcasting suite, Anchor, is today introducing a new feature designed to help creators promote their podcast: trailers. On the Anchor app for iOS and Android, podcasters will now be able to create a dedicated trailer for their podcast that combines an introduction and some background music, then turns it into an animated video that can be shared across social media and the wider web.

The trailer will also be made available within the podcast’s RSS feed, where it’s marked with the “trailer” episode type. 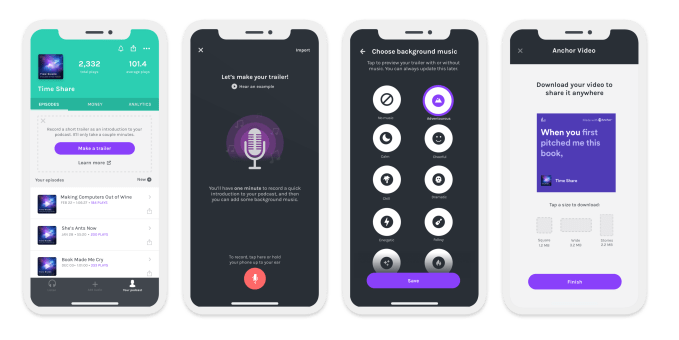 Anchor had already offered a way for users to mark episodes of their podcast as a trailer within the app, but the new feature makes it simpler to create a trailer through a more integrated experience.

For example, when you push the button to record, you have one minute to introduce your podcast — and a warning will flash when that minute is about to be up. When you’re satisfied with the recording, you can then browse through Anchor free library of background music, which is organized by mood — like adventurous, calm, dramatic, cheerful, energetic, funky, chill, etc. Or you can opt to go without music, if you prefer.

And if you already have a voice recording saved elsewhere, you can import it into Anchor to use as your trailer.

There are other options today for creating podcast trailers, like those from services like Wavve, Headliner, or Audiogram, for example. But Anchor’s goal is to be the one-stop-shop for everything a new podcaster needs to get started, and that includes promotional tools like this.

However, many professional podcasters still view Anchor as a sort of entry-level product and turn to more advanced audio editing suites to craft their shows. But over time, these extra, handy features could help Anchor to earn a place in podcaster’s workflow, even if it’s not their end-to-end solution.

Podcasting has become an important vertical for Anchor’s parent company Spotify, which led to it acquiring both Anchor and Gimlet earlier this year for $340 million. And its investments in podcasts, which have also included the acquisition of podcast network Parcast, have been starting to pay off.

The company reported in July its podcast audience had doubled in size since last year. In October, it said the number of podcast listeners on its service grew 40% from the prior quarter, and it now had 500,000 titles hosted on its platform.

Spotify can monetize podcasts in two ways, as with music — through ads and by pushing people into premium subscriptions. It now has 113 million paying customers and 248 million monthly actives. And once Spotify’s users are subscribed to a number of podcast shows, they’re more likely to stay with the service. In addition, podcasts don’t come with the licensing costs associated with record label deals, which Spotify also surely likes.

Anchor’s new trailers feature is live now on both iOS and Android.