An accidental sweep of the App Store removed more than 20 million ratings from the most popular apps — including from well-known brands like Google, Microsoft, Starbucks, Hulu, Nike and others — as well as from smaller developers. The issue began on October 23, 2019 and wasn’t resolved until yesterday, October 29. Apple says the ratings’ removal was due to a bug.

This massive ratings drop was spotted by the mobile app insights platform Appfigures.

The firm found that more than 300 apps from over 200 developers were affected by the sweep, which wiped out a total of 22 million app reviews from the App Store. On average, apps saw a 50% decrease in ratings in the affected countries, which included the U.S. 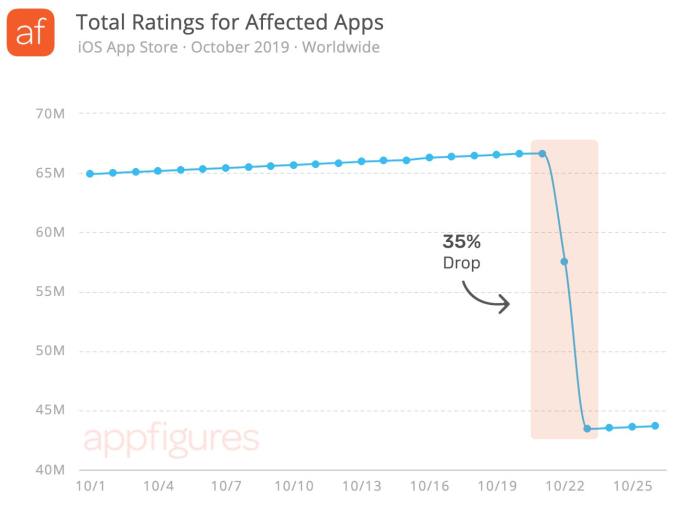 The U.S. was hit the hardest, however, as some 10 million ratings disappeared. But the sweep was global in nature, hitting all 155 countries Apple supports. China, the U.K., South Korea, Russia and Australia also felt a noticeable impact.

A few apps were hit harder than others. Hulu, for example, lost a whopping 95% of ratings in the U.S., while Dropbox and Chase lost 85%. Several companies affected by the bug declined to comment, but told us that the rating removals weren’t done at their request — they were just as surprised as everyone else.

WOW @Starbucks iOS app lost about 1.3mln of ratings overnight! @hulu lost about 900k, as well as dozens of other apps.
I hope this is just @AppStore bug. pic.twitter.com/cUIrb8yeeN

Developers speculated that Apple was possibly trying to clean up fake app ratings. This theory didn’t seem that likely, though, because Appfigures found that both positive and negative ratings were removed. Had the sweep been focused on fake ratings, then only the positive (fake) ratings would have been removed. 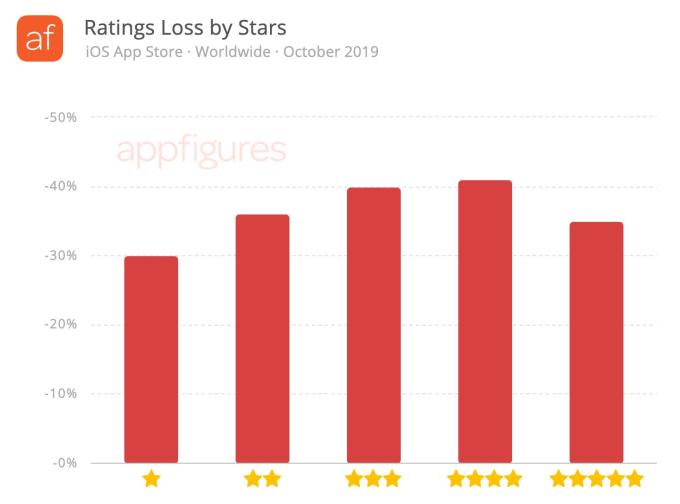 Another theory is that Apple was trying to speed up its ratings system and something just went wrong.

Unfortunately for some of the impacted developers, the bug had a profound effect on their app’s “Overall” rating. Their app may have dropped by several stars as a result of this problem. And that, in turn, could have hurt their ability to get downloads from App Store search results or Search Ads during the week.

Some of the impacted companies (and Appfigures) confirmed to TechCrunch the missing ratings were restored as of yesterday.

A similar incident took place last year, when an App Store bug led to thousands of iOS apps losing half their ratings over a weekend. Apple resolved that bug, but never offered any statements about what happened.

We heard that Apple spoke directly to some developers to explain the rating removals were done in error and it was working to fix the situation, which now appears resolved.

Reached for comment, Apple explained the issue was a bug and that the removed ratings weren’t permanently deleted and have been restored.

“App Store ratings and reviews are an important way for customers to share their experiences about apps they’ve downloaded,” a spokesperson said. “During routine maintenance to the App Store, ratings and reviews were temporarily affected by a bug that has since been resolved. While no reviews or ratings were ever deleted, the data displayed to users was impacted for a period of time. We apologize for the inconvenience this caused. All ratings and reviews have been restored,” they added.