Sony’s live TV streaming service, PlayStation Vue, is shutting down. The service will no longer be available as of January 30, 2020, the company announced today. The news comes only days after rumors circulated that claimed Sony was in search of a new owner for the struggling service.

A report in The Information claimed Sony had talked to fuboTV about a possible deal, which would include Vue’s subscriber base of some 500,000 users and its underlying technology. It also said Sony had tapped Bank of America Merrill Lynch to explore a sale several months ago.

The business was said to be valued in the tens of millions at the time. We understand Sony may have had difficulty finding a buyer because its service didn’t run on proprietary technology— it used the Disney-owned streaming platform BAMTech.

The news of Vue’s closure — and not a transfer of ownership — will likely disappoint a number of fans of the streaming service. Though a smaller crowd, Vue subscribers appreciated its user interface and unique features — like multi-view, which let you watch multiple live programs at once — as well as its decent sports package.

It’s not surprising, however, that Vue didn’t pan out. 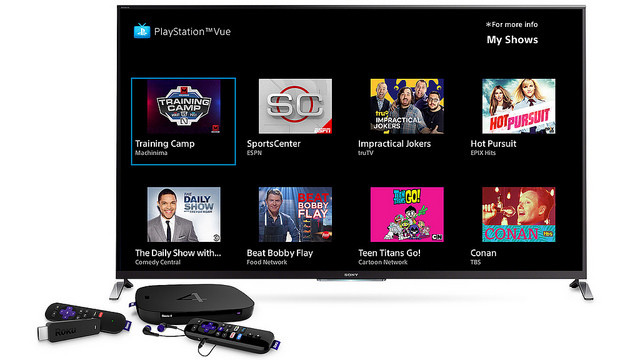 The service had initially faced challenges in consumer adoption, largely because of its branding. By calling it “PlayStation Vue,” many consumers thought it was limited to PlayStation consoles. In reality, Vue was available across platforms just like Hulu Live TV, YouTube TV, Sling TV and others are today. You didn’t even need to own a PlayStation to use it.

Sony has 100 million PlayStation 4s on the market, which makes its inability to make Vue work even more disappointing. Not only was Vue one of the first live TV streaming services to arrive on the market, it had a built-in audience to advertise to. But the rising costs of programming make these live TV streaming services a thin margin business at best, and have forced price hikes across the industry, including across all of Vue’s rivals.

In the end, Sony claimed market pressures are what led to Vue’s demise.

“Unfortunately, the highly competitive Pay TV industry, with expensive content and network deals, has been slower to change than we expected. Because of this, we have decided to remain focused on our core gaming business,” the Sony announcement stated.

The company directed PlayStation owners to its PlayStation Store on PS4 to continue to access movie and TV content going forward.

“We are very proud of what PlayStation Vue was able to accomplish. We had ambitious goals for how our service could change how people watch TV, showcasing PlayStation’s ability to innovate in a brand-new category within the Pay TV industry. We want to thank all of our customers, some of whom have been with us since PlayStation Vue’s launch in 2015,” the announcement read.