Sourcing ingredients in the restaurant industry is a dirty process that still relies heavily on voicemails and fax orders. More tech-forward solutions have been pushed, but getting restaurants and suppliers to uniformly sign on to a platform has been a relatively daunting challenge.

Choco is a young startup with plenty of momentum that’s aiming to attract restaurants and suppliers to their mobile ordering platform, which gives restaurants their very own food delivery app for getting ingredients from suppliers, moving them away from daily voicemail orders.

“[Leaving voicemails] a very tedious process and one that’s very prone to error but [restaurants] are going to repeat it every day,” Choco CEO Daniel Khachab tells TechCrunch. “This ‘system’ is highly inefficient and wasteful, but it’s our main competitor.”

Choco’s mobile app has an interface reminiscent of popular consumer apps, with a Messenger-like chat interface for communication between suppliers and restaurants and a Postmates-like ordering list that makes ordering as easy as tapping away on one’s commonly purchased ingredients. 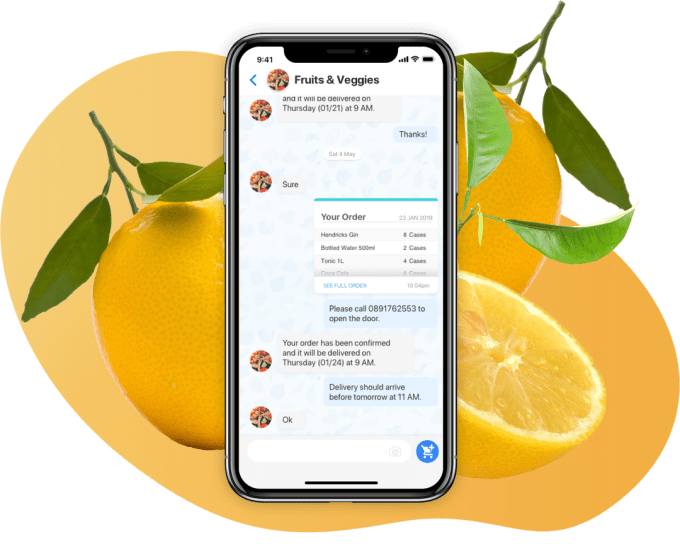 There’s a big opportunity here, and Khachab has been growing the Choco team at breakneck speeds to ensure that it is the solution to beat. The 18-month-old team has 100 employees already and is announcing that they’ve closed a $33.5 million Series A led by Bessemer Venture Partners. By the end of next year the company hopes to grow its business by 15x.

Choco is in 15 cities across Europe and the U.S. and says their early customers include everyone from Michelin-starred restaurants to burger chains. The company has now raised $41 million to date. Other investors include Atlantic Labs, Target Global, Visionaries Club and Greyhound.

As the company seeks to build up a user base among suppliers and restaurants keen to build out their networks, Choco currently isn’t monetizing its users. Khachab tells me the team is developing premium subscription features that will likely focus on monetizing suppliers’ abilities to reach restaurants and communicate with them about new offerings.

Khachab sees Choco’s solutions as one that makes restaurant/suppliers relationships better but also takes a step toward solving the broader problem of food waste in the restaurant industry. Better communication and analytics that aren’t on the back of a napkin mean more precise ordering that can prevent both sides from overstocking, increasing efficiency but also preserving resources. Khachab notes that estimates say that 30-40% of food produced each year is wasted and that nearly three-quarters of that waste happens in the supply chain before consumers are involved.