Enterprise software tool startups are so often birthed to either un-bundle or re-bundle what came before them. In an age where “consumerization of the enterprise” is a trendy phrase for investors, it was natural a startup would come along to bundle its take on some of the trendiest startup tools.

Taskade appears to be the love child of Notion, Slack and Asana. It’s a tool for startup teams to collaborate around projects that can be re-organized based on how the individual user best works through tasks. The startup graduated from YC in the most recent batch and has now locked down $5 million in seed funding from Grishin Robotics and Y Combinator, Taskade CEO John Xie tells TechCrunch.

It’s a platform that tries to meet an awful lot of needs at once. You can take notes, designate tasks, chat with co-workers, set goals and visualize everything you’ve already completed.

The startup certainly seems to take a page or two from Notion, where you can re-visualize databases in tables or Kanban boards with ease. Taskade has built this framework into a more collaborative tool, while trying to place limits on itself so that users aren’t left with an endless amount of customizations, something that can be both a blessing (to the technically minded) and a curse (to those who don’t find exploring a piece of software deeply enjoyable).

Taskade’s platform is organized around tasks arranged inside projects. Rather than being organized around pages, which can contain multiple data sets and perspectives, Taskade’s projects are limited strictly to one database each. It’s certainly a limitation, but one that probably cuts down on confusion and the temptation to stuff pages with as much as you can think of. 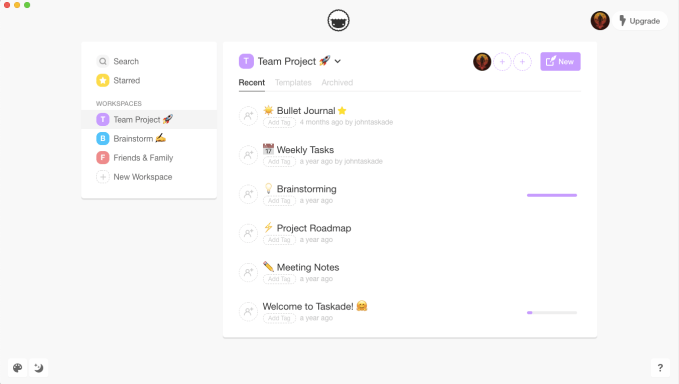 “Notion is a beautiful product, I think at some point it just gets extremely hard to manage all the hierarchy with the cross-linking and whatnot,” Xie told TechCrunch. “For us, we just wanted to make it much simpler and more workspace-driven so you are able to collaborate with multiple teams.”

The collaboration is another distinguishing factor of the platform. The team has built a commenting stream that lives inside each project so that a project can have its own ongoing dialog without forcing users into another Slack channel. You also can fire up video chats inside the project pages and chat through the data without opening another app or sending another invite.

The startups that Taskade is taking on feel ubiquitous. Slack went public this summer and is sitting on a $11.4 billion market cap. Asana has raised north of $210 million from investors. Notion, the youngin’ of the group, recently nabbed new funding at an $800 million valuation.

The team at Taskade is still quite small; there are just six employees at the company right now, organized remotely, but the focus is on using this funding to build out the product over time rather than pumping cash into sales and marketing, Xie tells me. The company has largely been building up early customers through word-of-mouth and has taken a particular foothold among creative agency customers. 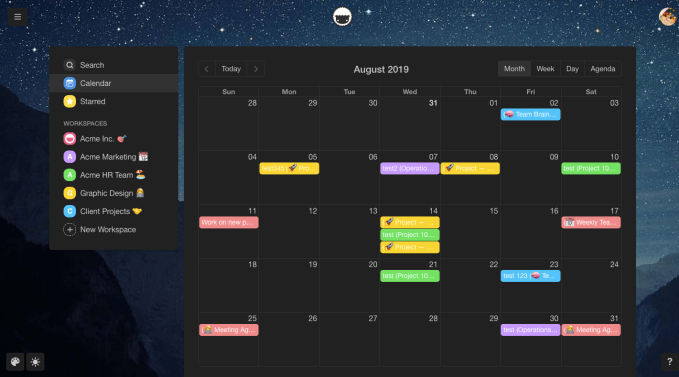 The product has free and paid tiers, priced at $10 per month per user. Taskade is still flirting with how they want the relationship between their free and paid tiers to look. Xie tells me they’re hoping to transition to a usage-based free model rather than one that leaves certain features pay-walled.

The platform is available on Windows, Mac, Android, iOS and the web.