Someone is finally putting the Echo Show to good use. Today, Discovery announced the U.S. launch of its Food Network Kitchen subscription service, which will bring daily live and on-demand cooking classes as well as step-by-step instructional cooking videos and more to Amazon Echo devices, including the smart screen Echo Show, as well as Fire TV, Fire tablets and smartphones.

The service was initially unveiled in September at Amazon’s hardware event in Seattle as a demonstration of how Alexa devices can be useful in the kitchen.

At the event, Bobby Flay spoke (via video) about his involvement, saying he was excited to be able to enter “basically any kitchen in the world, anywhere in the world,” to teach people how to cook. 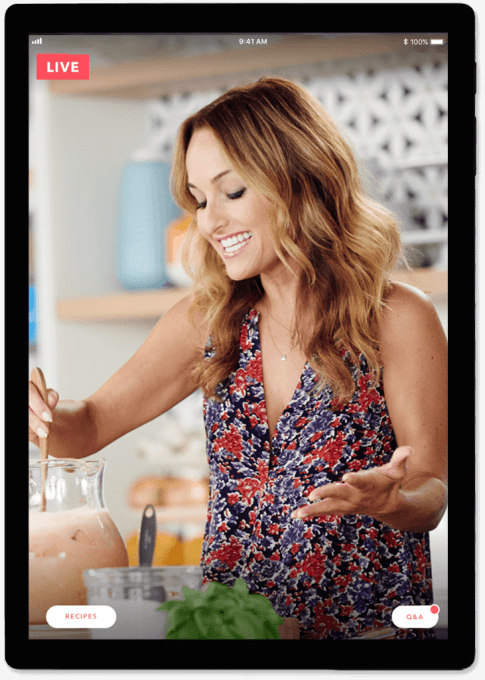 Flay isn’t the only celeb chef or on-air personality involved with the new service.

The Food Network Kitchen app itself is something of a mashup of live programming, on-demand video and a more traditional recipe app.

The live class schedules will be posted a week in advance, so you can make plans to tune in. But if you can’t make the daily classes, there also are hundreds of on-demand classes, including 500 beginner courses, 395 international cuisine classes and 75 family-friendly classes.

There also are hundreds of step-by-step videos, as well as a curated selection of Food Network TV shows available.

Helpfully, the new app will integrate home delivery for all the ingredients used in the classes, recipes and other instructional videos and shows so you can be ready to cook.

But what’s most interesting is how the live classes will work. The classes aren’t just being live-streamed to devices, like a live TV show. They’ll actually allow for two-way interaction between the users and the chefs, in real time. This is, by far, one of the more original use cases for the Echo Show, in particular, to date.

Often, using devices while cooking can be difficult because fingers get messy or your screen shuts off.

Plus, today’s recipe sites are overrun with extra stories for SEO purposes and bogged down with ads and other clutter. And while there are plenty of great recipe apps, not as many have integrated with grocery delivery. They generally just provide a “shopping list” in the app, expecting users to go to the store to buy the ingredients. 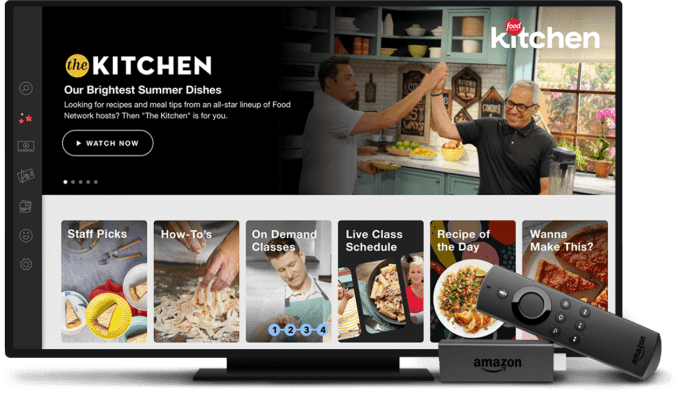 In addition to modernizing the cooking experience, Discovery is also tying together Food Network’s TV channel and the Food Network Kitchen app, at times. For example, Rachael Ray’s “30 Minute Meals” will return to Food Network with new episodes on November 9, 2019. The app users will be able to view all 10 episodes and tune in to take live classes with Rachael Ray every day during the week of November 11.

At other times, the app will offer seasonal series, like “Christmas Cookie Challenge,” “Holiday Baking Championship” and “Ultimate Hanukkah Challenge.” 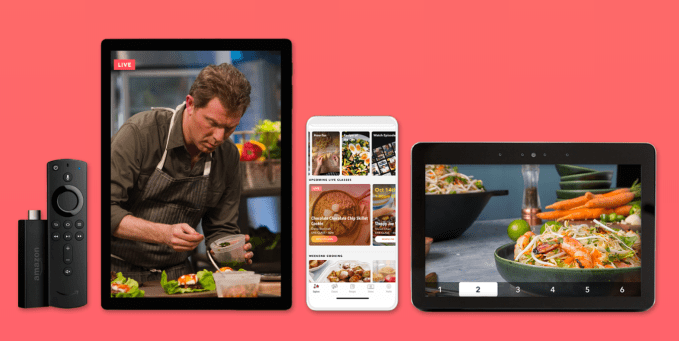 The service will offer a free 90-day trial and promotional pricing of $47.99 per year ($4/mo) at launch. This seems reasonable for anyone who regularly turns to cooking apps and videos and wants more hands-on instruction. The price includes the hundreds of on-demand classes, 25 weekly classes, plus all the other recipes and shows.

Food Network Kitchen isn’t exclusive to Amazon devices at launch, because it’s also available on smartphones. But Amazon does have the exclusive in being the first “smart-speaker-with-screen” platform to support the app.