During the first six months of 2019, advertisers spent $57.9 billion on U.S. digital advertising, according to the latest report prepared by PwC for the Interactive Advertising Bureau (an online advertising trade group).

That’s a 17% increase compared to the same period in 2018, and the most spending IAB has ever seen in the first half of the year.

However, PwC’s David Silverman noted that it’s actually “a touch lower” compared to the second six months of last year, marking the first time we haven’t seen continual growth since 2009.

Silverman suggested that one factor contributing to this is slowing growth in mobile and social advertising. To be clear, both sectors are up year-over-year: Mobile ads grew 29% to $30.9 billion, while social media spending increased 26% to $16.5 billion.

But he said, “Those sectors of the industry are likely maturing” — so we’re not seeing the growth levels that we have in recent years. 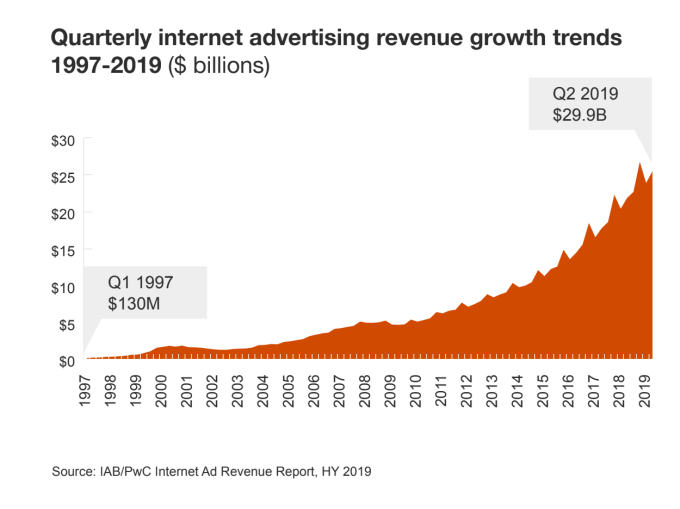 Meanwhile, the IAB’s senior vice president of research and analytics Sue Hogan noted that the drop-off between the end of 2018 and beginning of 2019 amounts to “a rounding error” (in fact, the report puts spending during both periods at $57.9 billion).

Overall, she argued that every category remains “healthy,” and that the big story is the growth in video advertising, which was up 36% to $9.5 billion.

The report also includes numbers around revenue concentration, specifically the amount of ad spend going to the top 10 digital ad companies. It doesn’t name specific companies (Google and Facebook are widely seen as the two giants dominating this space), but it says that revenue concentration in the top 10 has fluctuated between 69% and 77% over the past decade.

During the second quarter of 2019, revenue concentration remained at the top end of that range, specifically 76%. Meanwhile, companies 11 through 25 only accounted for 7%.