Digital ad spending in the United States exceeded $100 billion for the first time last year, according to the latest internet advertising report from the Interactive Advertising Bureau and PricewaterhouseCoopers.

Sue Hogan, the IAB’s senior vice president of research and measurement, said that in the past, mobile ad spend has lagged behind time spent on those devices. But now, she said, “That parity is almost being reached. Eyeballs are being followed by dollars.”

PwC partner David Silverman acknowledged that this leads to an obvious follow-up: Once ad dollars catch up to consumer attention, will growth slow? In Silverman’s view, “the industry has found ways to evolve” in the past, and it will again. 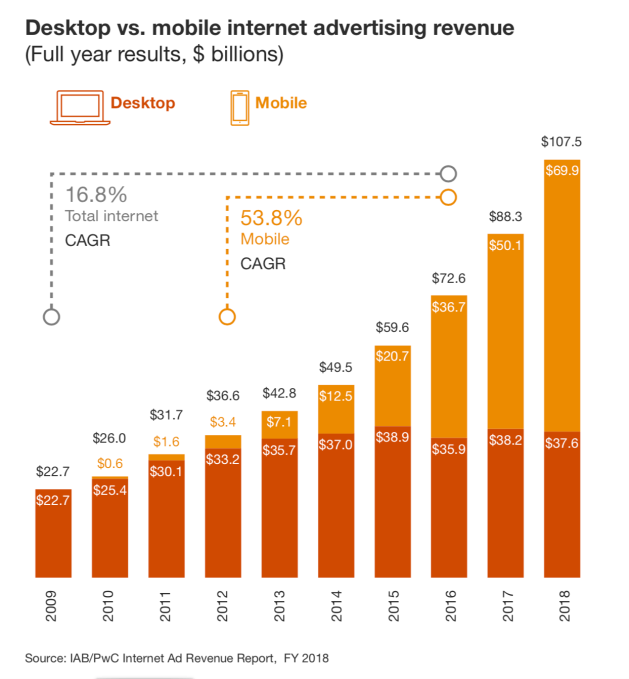 “There’s other shifts that are occurring now,” he added, pointing to the growth in digital audio advertising (up 23% to $2.3 billion), as well as other areas like out-of-home advertising and bringing ads to new devices.

One of the recurring concerns about the digital ad industry is its dominance by Facebook and Google. While the IAB report doesn’t single out specific companies, it does measure concentration in terms of how much spending is going to the top 10 ad sellers. In 2018, those sellers collected 77% of total spending — the IAB says the percentage has fluctuated between 69% and 77% in the past decade.

As for the effect of GDPR and other privacy regulation, Silverman said, “It certainly will have a significant impact, particularly on the use of data and AI in making advertisements more relevant and more effective,” but he suggested it’s too early to say precisely what the financial impact will be.

Hogan suggested that the California Consumer Protection Act could be more influential on U.S. ad spend. The IAB (which is a trade group representing online advertisers and publishers) has been advocating for federal regulation, rather than a state-by-state approach.

“I hope that we don’t get to the point where it becomes a strain on the industry,” she said. “I think more and more education is needed around that.”