As handset makers continue to work on ways of making smartphones more streamlined and sleek, while at the same time introducing new features that will get people buying more devices, a startup that is pioneering something called “software-defined” surfaces — essentially, using ultrasound and AI to turn any kind of material, and any kind of surface, into one that will respond to gestures, touch and other forces — is setting out its stall to help them and other hardware makers change up the game.

Sentons, the startup out of Silicon Valley that is building software-defined surface technology, is today announcing the launch of SurfaceWave, a processor and accompanying gesture engine that can be used in smartphones and other hardware to create virtual wheels and buttons to control and navigate apps and features on the devices themselves. The SurfaceWave processor and engine are available to “any mobile manufacturer.”

Before this, Sentons had already inked direct deals to test market interest in its technology. There were already three smartphones released — two of which were only sold in Asia (models and customer names undisclosed by Sentons) and one of which is made by Asus in partnership with Tencent, the Republic of Gamers phone (the Air Triggers are powered by Sentons). Jess Lee, the company’s CEO, told me in an interview that there are another 10-12 devices “in process” right now due to be released in coming cycles. He would not comment on whether his former employer is one of them.

Sentons has been around since 2011, but very much under the radar until this year, when it announced that Lee — who had been at Apple, after his previous company, the cutting-edge imaging startup InVisage, was acquired by the iPhone maker — was coming on as CEO.

The company has quietly raised about $37 million mainly from two investors, NEA and Chinese-American firm Northern Light Venture Capital, with Khosla also holding a stake. Lee confirmed to me that Sentons is currently raising another, probably larger, round. (Given the company’s partnership with Tencent and Asus, those are two companies I would think are candidates as strategic investors.)

The sound of silence 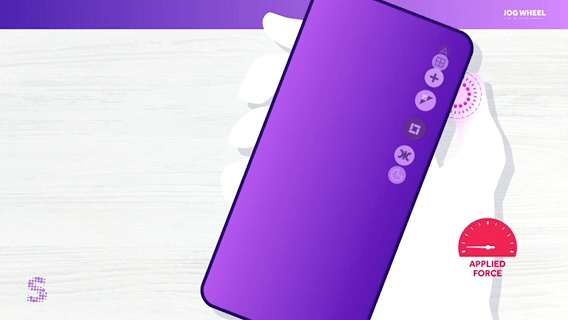 Its system is based around a processor that emits ultrasonic “pings” (similar to sonar array, the company says, which is used for example on submarines to navigate and communicate) to detect physical movement and force on the surface of an object. The company says that this technique is much more sophisticated than capacitive touch that has been used on smartphones up to now, because combined with Sentons’ algorithms it can measure force and intent as well as touch.

Combined with the processor that emits the pings and houses the gesture engine, Sentons also uses “sensor modules” around the perimeter of a device to detect when those pings are interrupted. The system trains itself and can adjust both to temporal “buttons” and also other unintended things like when a screen cracks and your gestures move over to a different area of the phone. 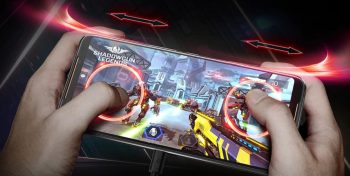 Gaming — the main use case for Asus’s ROG phone — is an obvious category ripe for software-defined surfaces. The medium always strives for more immersive experiences, and as more games are either natively made for phones, or ported there because of the popularity of mobile gaming, handset makers and publishers are always trying to come up with ways to enhance what is, ultimately, very limited real estate (even with larger screens). Using any and all parts of a device to experience motion and other physical responses, and to control the game, is a natural fit for what Sentons has built.

But the bigger picture and longer-term goal is to apply Sentons’ technology for other uses on devices — photography and building enhanced camera tools is one obvious example — and on other “hardware,” like connected cars, clothes and even the human body, as Sentons’ technology can also work on and through human tissue.

“Every surface is an opportunity,” Lee said, noting that conversations around health and medical technology are still very early, while other areas like wearables and automotive are seeing “engagement” already. “In the cabin of a vehicle, you have a wealth of tactile materials, whether it’s leather dashboards or metal buttons, and all of those are extremely interesting to us,” he added.

At the same time, the more immediate opportunity for Sentons is the mobile industry.

Smartphone sales have slowed down, and for some vendors declined, in recent years; and while some of that might have to do with premium device prices continuing to climb, and much higher smartphone penetration globally, some have laid the blame in part on a lack of innovation. Specifically, newer phones are just not providing enough “must have” new features to merit making a purchase of a new device if you already have one.

You could argue that making a technology like this widely available and open to all comers might make those who are trying to make their devices stand out with special features less inclined to jump on the bandwagon.

“Yes, you could say there is more value in scarcity, an approach we took in the last company,” Lee said, referring to InVisage and how very under the radar it was before being snapped up by Apple.

However, he thinks a different approach is needed here. “Whether we launched this platform to everyone or not, the gates have opened, the piñata has broken, and we see a lot more opportunities and want to go for them,” he said.

“You can call it a multi-pronged approach,” he continued, “but ensuring the adoption of software-defined interactions [by trying to work with as many companies as possible] gets the technology or use out there quickly.” He noted that when a new gesture is introduced on devices, it can take time for the world to absorb it, “and we are positive there will be followers, perhaps with different technology, that will compete with us, so a broad launch is what we are going for.”