TiVo’s answer to The Roku Channel, TiVo Plus, is launching today. The company had already unveiled its plans for ad-supported streaming earlier this month with the debut of two new models of its DVR, the TiVo Edge. Like The Roku Channel, TUBI, Vudu’s Movies on Us and others, TiVo Plus is available to stream for free. But unlike others in this space, TiVo Plus is available exclusively to TiVo devices owners.

The service is enabled by a TiVo partnership with XUMO, Jukin Media and other publishers.

The company says there will be “thousands” of movies and TV shows available in an app-free environment. 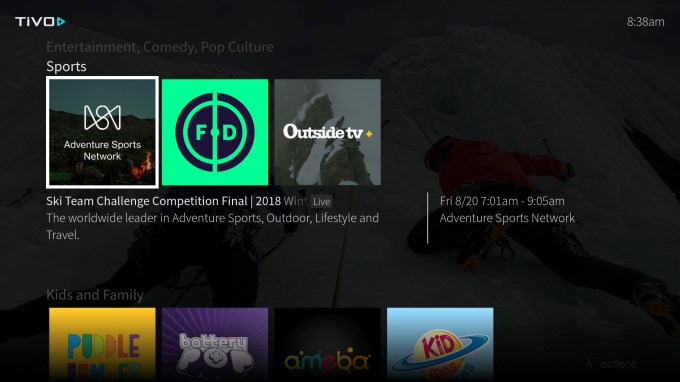 Despite the obvious comparisons to The Roku Channel, the TiVo Plus interface isn’t as well-designed. Where Roku puts the focus on the content that’s available for free streaming, TiVo Plus highlights the publishers. The content is organized in generic and broad groupings, like “Movies and TV,” “Sports,” “Kids and Family,” “Entertainment, Comedy Pop Culture” and others, instead of being more editorially curated or personalized to the viewer. 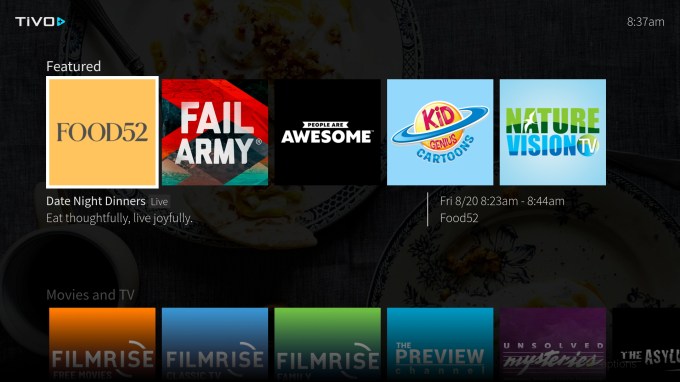 This was the first time that TiVo lowered its subscriptions for the DVR for antenna users, in an effort to respond to market pressures. Most streaming media devices — like Fire TV, Roku, Apple TV, etc. — don’t require subscriptions, as the companies don’t license TV guide data for their users, nor do they operate with a cable TV-like business model involving ongoing service fees. That’s allowed customers, and particularly cord-cutters, to get comfortable with one-time purchase fees and has weakened TiVo’s position.

With a dwindling customer base, TiVo has turned to advertising — not only with its new ad-supported streaming service on its devices, but also with skippable pre-roll ads on DVR recordings, as recently reported and confirmed by TiVo.

TiVo Plus is rolling out starting today and continuing over the next few weeks to customers with Series 6 devices with Experience 4 (TE4). It will be available on the Home screen, when it goes live.