LinkedIn, the Microsoft-owned social network for the working world with around 650 million users, is known best as a place where people connect with each other online either to build work connections, for recruitment, or for professional development. Now, the company is taking a step to bring its networking features into the physical world: the company is launching a new feature called Events, a (currently free) tool for people to plan, announce and invite people to meetups and other get-togethers, in the physical world.

The feature — which will appear as a menu item in LinkedIn’s website and mobile app — is rolling out first in English-speaking countries starting October 17, with the aim to expand it to further non-English markets soon after that.

Ajay Datta, the head of product for LinkedIn India (where the app was developed; more on that below), believes that there is a clear gap in the market for a feature like this, much like you could argue Facebook’s events feature has served a role in the out-of-work world to plan casual events.

“I think there is a massive whitespace for events today,” he said. “People don’t have a single place to organise [work-related] offline meetups specific to an industry or a neighborhood. People want to find other people.”

You may recall a limited trial of the Events feature about a year ago in New York and San Francisco: the kinds of events that LinkedIn said were created with the pilot included meetups, training sessions, offsites, sales events and happy hours, so expect to see these popping up in the live product, too. 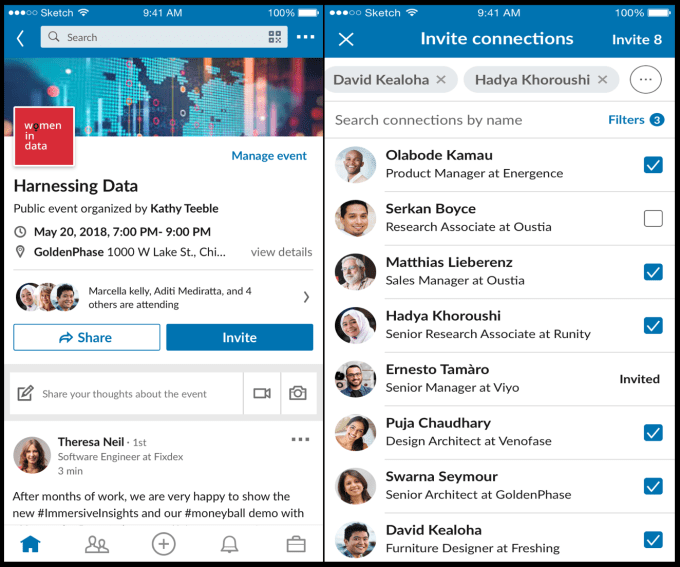 Events is also important because it is the first major, global feature to be built out of the company’s R&D office in Bangalore, India — a significant milestone for the team of engineers and others that are based there. Up to now, much of the work that they have done has been focused on regional tools or those specifically targeting emerging markets.

LinkedIn Lite, the company’s pared-down Android app for users in bandwidth-constrained markets, has probably been the  Bangalore office’s biggest win so far: it has now passed 10 million downloads in the 70+ countries where it is available.

To be clear, right now, Events is free to use and is fairly limited in its first iteration. You can create an announcement and invite first-person contacts, but you have no way to promote the event beyond your own organic reach on the platform (and wherever you might want to share the link outside it).

“Targeting is not the focus right now,” said Ajay Datta, the head of product at LinkedIn India. “Organic adoption is what we are looking for first before we look at anything else.”

You can lay out your plans, but there are no links to services to find and book out available spaces. You can’t create any ticketing or other limitations on attendance numbers, but you can include links to places where you might be able to manage such things, such as Eventbrite or any of its many competitors.

But if this starts to see traction — and I suspect that it will, because of its natural proximity to the social network to amplify an event, and the fact that most of the people who are hanging out on LinkedIn are likely to already be predisposed to engaging on it — you could imagine how LinkedIn might start to add on all of the above, and more. It says that other areas where it’s continuing to experiment to facilitate better in-person connections using include QR codes, business cards, and proximity-based beacons.

This could help LinkedIn create another revenue stream in its business — or at least provide another way to boost existing revenue streams such as premium memberships (access to a wider circle of people to invite), advertising and recruitment solutions. Potentially, this could help pave the way to positioning LinkedIn (and by association, Microsoft) as an Eventbrite competitor.

From the Events menu bar, you will be able to create events yourself and also invite others. It looks like it’s already live on my own account, so here is how it looks from there: 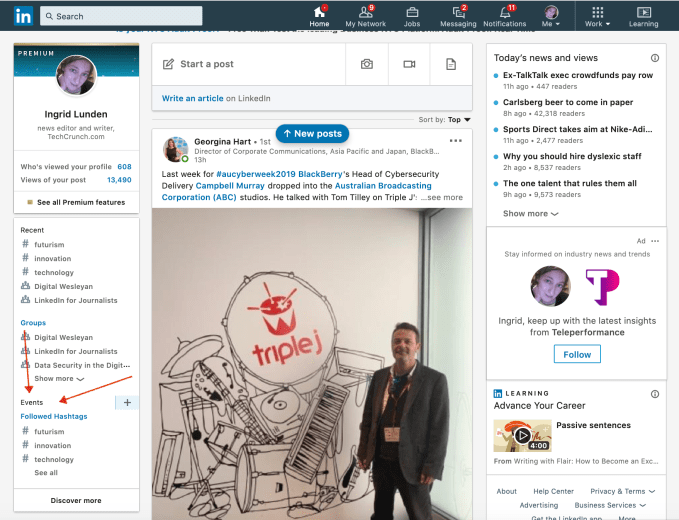 And here’s how the event-creation window looks. As you can see, you post links through to other sites for ticketing, and potentially further details about agendas and more. Each box has a limit on 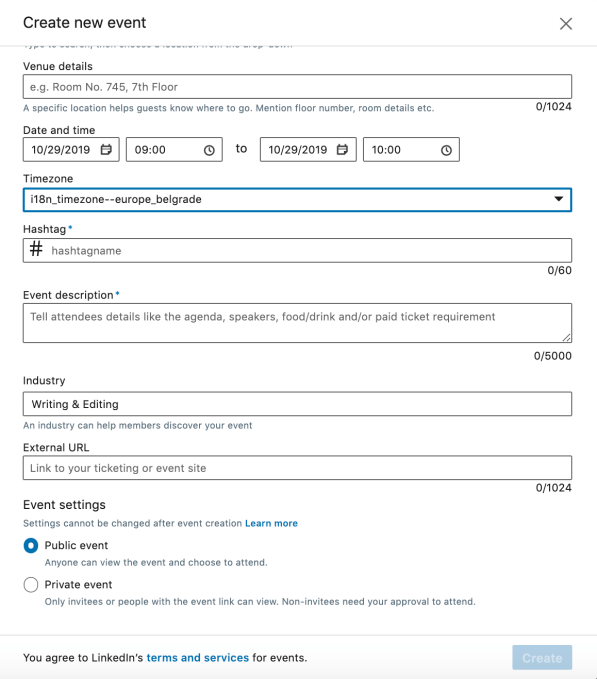 LinkedIn is also being cognisant of its reputation for how the platform can be used for over-aggressive contacting, and so it’s also including security features for people to report and block suspicious events or conversations related to them. It’s also applying AI algorithms to the events that do get listed to screen them for bad actors and bogus content, which then get assessed by human reviewers for further action.

The move into Events is one of the bigger moves that LinkedIn has made over the last several years — another big one has been its efforts in educational content — to open itself up to a new area of business by leveraging how it uses the professional graph that it has built up over time. It sometimes feels to me that under Microsoft (which bought the company for $26 billion in 2016) the company has been less productive in terms of launching new services and generally making noise, so this move is interesting in that sense too.

Still, the synergy between online networking and physical networking is so close that it’s a surprise that the company hadn’t launched an Events feature before now. All the more because Linked has dabbled in building tools to help people make better connections with each other when they are in the same physical space before.

Years ago it launched a Connected app to help people maximise the kinds of connections they make in the physical world. It has since been sunset and integrated into the main LinkedIn app, which has a “find nearby” feature that you can use to see if people who are your connections are, say, at the same conference as you are, or if you’re meeting a contact for coffee and don’t know what the person looks like.

It’s also been over the last three months seeding the idea of associating actual events with LinkedIn the platform by encouraging the organising of “LinkedIn Local” events, which apparently have created more feedback from users to build an Events too, too.

It’s not clear why it’s taken so long — LinkedIn sometimes does take its time, as it did with video — but in this period when some of us are beginning to pause and ponder what being online too much does for our ability to relate to each other, collaborate and progress not just in the working world, but in the wider world, it’s an interesting moment to choose to launch Events. We’ll see if LinkedInners agree.