As you are likely already aware, Epic Games is pulling a massive PR stunt that has shrunk the world’s most popular game down to a single black hole.

As part of Fortnite’s Season 10 live event, called “The End,” the entire Battle Royale Island was sucked into a black hole, with every Fortnite social media channel deleting all of its content save for a live stream of the aforementioned black hole.

This has been going on for nearly 24 hours now. I’d say there’s less than 1% possibility that this is actually the end of the game.

For one thing, Fortnite is an insane revenue generator for Epic Games, a company that not only makes games but develops software for others to make games. In fact, Fortnite was actually built as a marketing vehicle for Epic’s Unreal Engine, to show off what’s possible with the technology.

No numbers have been released recently, but at one point last summer, The Verge reported that the game was making $300 million/month.

Fast-forward to today, more than two years after launch, and the game is far and away the most popular video game on the planet, with 250 million registered accounts. It’s also one of the biggest esports by prize pool, with Epic pledging $100 million in prize cash for 2019.

But beyond the money (and let’s not underplay the money here), there is also some evidence that the black hole event is slated to end on Tuesday morning. A data miner who goes by Lucas7yoshi on Twitter points to code on Fortnite.com that allegedly reveals the end of the event is on Tuesday at 6AM EST. Of course, this is far from confirmed and though we’ve reached out to Epic, we haven’t heard back.

I have independtly confirmed the authenticity of a discovery that points to "The-End" lasting until Tuesday, 6AM EST

This is not stuck in stone, this info is from https://t.co/0TDeMk7Bda code. pic.twitter.com/ElnNFKppWn

Rather, the company is building as much hype as possible around its next chapter. With the entire map sucked into a black hole, all signs point to a brand new map.

This is important for two unequal reasons.

First and foremost, Fortnite has always taken place on the same map. Points of interest have been wiped away and replaced, and biodomes have been updated and tweaked along the way. Indeed, the “current” Fortnite map is markedly different from the map the game launched with. 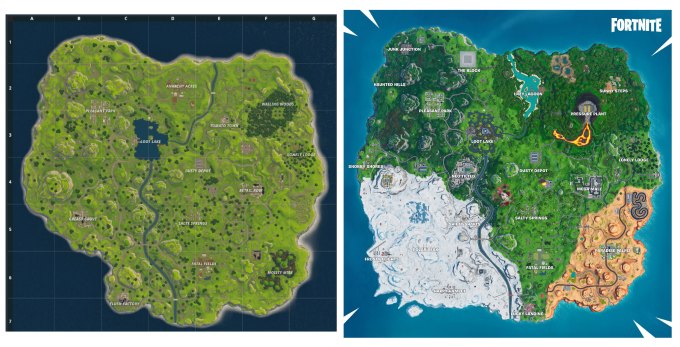 But it has been a slow transition, with one small change here and there for more than two years. Whatever the reason behind this, one symptom has undoubtedly had an effect on the game. The longer you’ve played Fortnite, the more of an advantage you have.

This is particularly true with mechanics like building. Experience in other games, be it Battle Royale or third-person shooters, doesn’t carry over into Fortnite, where winning on both defense on offense rests in a player’s ability to build.

But the map plays its part, too. Long-time players of the game know this island inside and out. They know that you can slide down this part of the mountain without taking fall damage, or that it’s difficult to jump your way onto this plateau without building. They know every single loot spawn on the map.

This has meant that, after two years, Fortnite has favored the veterans, which has left newcomers in a particularly difficult position.

Epic has tried to counter the imbalance of its players in a number of ways. For one, the game added Playground mode to give players a chance to practice in a relatively low-stakes environment. But Fortnite also made changes in the game that have given an edge to brand new players. The easiest and most obvious example of this is the introduction of the mechs in the beginning of Season 10, which were essentially unbeatable at their debut and took little to no skill to operate. Veterans were not pleased.

Everybody keeps asking my thoughts on the new mechs pic.twitter.com/0AHsXYhlg5

The piece that has been missing for the game is a good jumping-on point.

A brand new map may be the biggest opportunity yet for brand new players to join up alongside veterans of the game and have a fighting chance of being successful. For the first time, everyone will be lost. No one will know where all the loot is spawned in this or that building, or how to rotate from one point of interest to another with the greatest height advantage or the most cover.

But, instead of transitioning from the original map to a new one in a matter of hours, as is standard with every other update to a game, Epic has decided to draw this one out.

And let’s keep this in context. Most schools are off today for Columbus Day. All those kids who were excited to grind out Season 11 on their day off are now left staring into a Black Hole with nothing to do but simmer in rage or… ya know, do something else.

This is exactly the kind of alpha energy from a game maker that I am here for. The ego!

While other games worry about getting as many players on their servers as possible at any given second of any day, Fortnite is taking a few days off to let you really miss it. Distance makes the heart grow fonder. For both old and new players, a new map means a fresh start and a fresh reason to get excited about Fortnite.

EA’s Apex Legends remains one of the biggest threats to Fortnite. The Battle Royale game had an explosive (and reportedly expensive) launch and hit 50 million users faster than Fortnite did at launch. But interest in the game petered out until very recently, when EA introduced a brand new map for the first time.

The new map, called World’s Edge, reinvigorated the player base. It’s been out for about two weeks now.

With Epic’s black hole stunt, the publisher is having a true snap back moment.

“Go play your other game, if you must, or better yet just stare longingly into this cryptic black hole,” Fortnite is saying. “You’ll come running back the moment you hear I’ve returned.”