Satellite imagery holds a wealth of information that could be useful for industries, science and humanitarian causes, but one big and persistent challenge with it has been a lack of effective ways to tap that disparate data for specific ends.

That’s created a demand for better analytics, and now, one of the startups that has been building solutions to do just that is announcing a round of funding as it gears up for expansion. Descartes Labs, a geospatial imagery analytics startup out of Santa Fe, New Mexico, is today announcing that it has closed a $20 million round of funding, money that CEO and founder Mark Johnson described to me as a bridge round ahead of the startup closing and announcing a larger growth round.

The funding is being led by Union Grove Venture Partners, with Ajax Strategies, Crosslink Capital, and March Capital Partners (which led its previous round) also participating. It brings the total raised by Descartes Labs to $60 million, and while Johnson said the startup would not be disclosing its valuation, PitchBook notes that it is $220 million ($200 million pre-money in this round).

As a point of comparison, another startup in the area of geospatial analytics, Orbital Insight, is reportedly now raising money at a $430 million valuation (that data is from January of this year, and we’ve contacted the company to see if it ever closed).

Santa Fe — a city popular with retirees that counts tourism as its biggest industry — is an unlikely place to find a tech startup. Descartes Labs’ presence there is a result of that fact that it is a spinoff from the Los Alamos National Laboratory near the city.

Johnson — who had lived in San Francisco before coming to Santa Fe to help create Descartes Labs (his previous experience building Zite for media, he said, led the Los Alamos scientists to first conceive of the Descartes Labs IP as the basis of a kind of search engine) — admitted that he never thought the company would stay headquartered there beyond a short initial phase of growth of six months.

However, it turned out that the trends around more distributed workforces (and cloud computing to enable that), engineers looking for employment alternatives to living in pricey San Francisco, plus the heated competition for talent you get in the Valley all came together in a perfect storm that helped Descartes Labs establish and thrive on its home turf.

Descartes Labs — named after the seminal philosopher/mathematician Rene Descartes — describes itself as a “data refinery”. By this, it means it injests a lot of imagery and unstructured data related to the earth that is picked up primarily by satellites but also other sensors (Johnson notes that its sources include data from publicly available satellites; data from NASA and the European space agency, and data from the companies themselves); applies AI-based techniques including computer vision analysis and machine learning to make sense of the sometimes-grainy imagery; and distills and orders it to create insights into what is going on down below, and how that is likely to evolve. 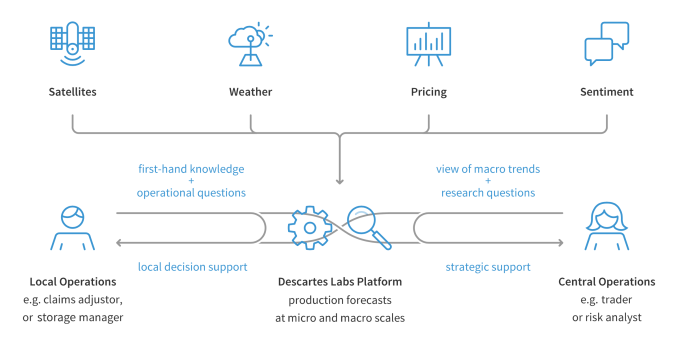 This includes not just what is happening on the surface of the earth, but also in the air above it: Descartes Labs has worked on projects to detect levels of methane gas in oil fields, the spread of wildfires, and how crops might grow in a particular area, and the impact of weather patterns on it all.

It has produced work for a range of clients that have included governments (the methane detection, pictured above, was commissioned as part of New Mexico’s effort to reduce greenhouse gas emissions), energy giants and industrial agribusiness, and traders.

“The idea is to help them take advantage of all the new data going online,” Johnson said, noting that this can help, for example, bankers forecast how much a commodity will trade for, or the effect of a change in soil composition on a crop.

The fact that Descartes Labs’ work has connected it with the energy industry gives an interesting twist to the use of the phrase “data refinery”. But in case you were wondering, Johnson said that the company goes through a process of vetting potential customers to determine if the data Descartes Labs provides to them is for a positive end, or not.

“We have a deep belief that we can help them become more efficient,” he said. “Those looking at earth data are doing so because they care about the planet and are working to try to become more sustainable.”

Johnson also said (in answer to my question about it) that so far, there haven’t been any instances where the startup has been prohibited to work with any customers or countries, but you could imagine how — in this day of data being ‘the new oil’ and the fulcrum of power — that could potentially be an issue. (Related to this: Orbital Insight counts In-Q-Tel, the CIA’s venture arm, as one of its backers.)

Looking ahead, the company is building what it describes as a “digital twin” of the earth, the idea being that in doing so it can better model the imagery that it injests and link up data from different regions more seamlessly (since, after all, a climatic event in one part of the world inevitably impacts another). Notably, “digital twinning” is a common concept that we see applied in other AI-based enterprises to better predict activity: this is the approach that, for example, Forward Networks takes when building models of an enterprise’s network to determine how apps will behave and identify the reasons behind an outage.

In addition to the funding round, Descartes Labs named Phil Fraher its new CFO, and is announcing Veery Maxwell, Director for Energy Innovation and Patrick Cairns, who co-founded UGVP, as new board observers.