Global app revenue continues to climb, thanks to the growth in mobile gaming and the subscription economy. In the third quarter of 2019, consumer revenue grew 22.9% year-over-year from $17.9 billion to reach an estimated $21.9 billion across both the App Store and Google Play worldwide, according to new data from Sensor Tower.

Notably, the App Store continues to account for the large majority of this revenue, the report found, making up 65% of total spending compared with just 35% on Google Play. 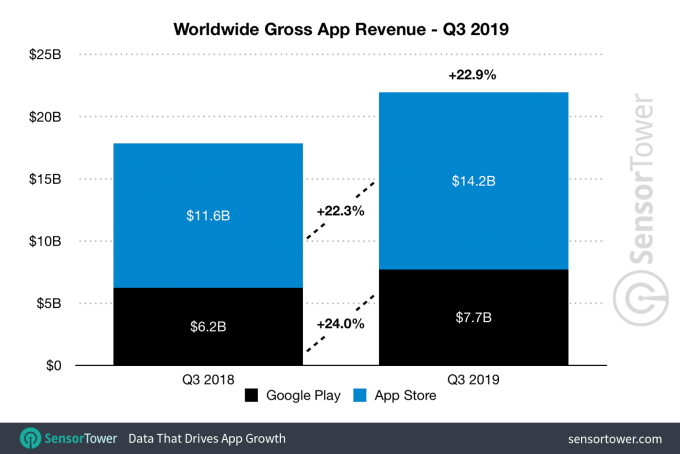 Sensor Tower’s revenue estimates are a bit lower than those provided by App Annie’s recent report, which said the quarter saw $23 billion in consumer spending, not ~$22 billion.

In both cases, Google Play is still said to be the main source for downloads, with nearly three times more first-time installs than the App Store. In Q3, the total number of downloads was up 9.7% year-over-year to 29.6 billion, said Sensor Tower, with Google Play accounting for 21.6 billion of those.

Despite the overall growth, one big app market — China — saw a slight decline, Sensor Tower found. Its installs dropped 6% year-over-year to 2.2 billion in the quarter. But its revenue grew by 26.9% to $4.1 billion, up from $3.2 billion the year prior. This could be attributed to the nine-month game license freeze in China which, though now lifted, had slowed momentum.

Sensor Tower’s charts don’t include third-party app stores, so it’s not a full picture of the Chinese app market, it’s worth noting. 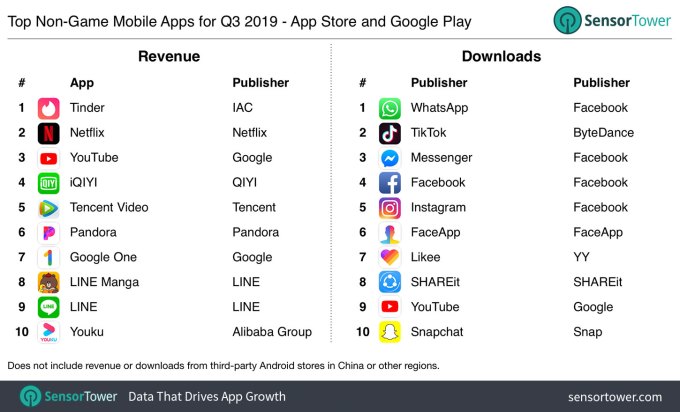 The top money-making (non-game) app in the quarter was again Tinder, which generated $233 million in consumer spending, up 7% over the prior quarter. Netflix was No. 2 and YouTube clocked in at No. 3, at $164 million in Q3.

App Annie has a slightly different ranking. It has Tinder and Netflix leading the top-grossing charts, but puts IQIYI ahead of YouTube. This could be because App Annie has a bigger window into the Chinese app market.

In terms of downloads, TikTok is continuing to disrupt Facebook-owned apps’ dominance over the top of the charts. In Sensor Tower’s rankings, WhatsApp was No. 1 and Messenger was No. 3, but Facebook and Instagram dropped to No. 4 and No. 5, respectively. And TikTok reached No. 2. 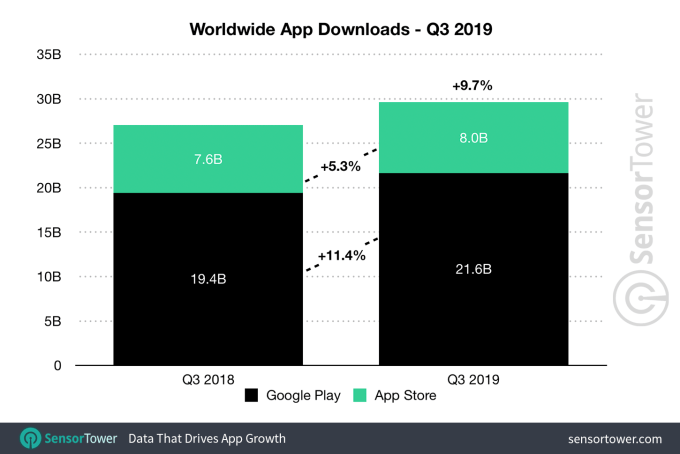 This isn’t the first time TikTok has passed Facebook, Sensor Tower said — it did so back in Q4 2018 and in Q1 2019, before dropping to No. 4 again last quarter. But with 177 million downloads in Q3, it’s inching its way up to the top.

App Annie, on the other hand, sees TikTok having just a bit more of climb, sticking it at No. 3 in the quarter, behind Messenger and Facebook. It also called out some Q3 break-out hits, like the return of FaceApp’s popularity (No. 9 in downloads) and the growing subscription revenue of Google One (No. 7 in non-game revenue). Sensor Tower put FaceApp at No. 6 instead, but agreed on Google One.

Mobile gaming continues to generate most of the cash, and did so again in Q3 with $16.3 billion in mobile game gross revenue — or 74% of the total in-app spending, the new report said. The App Store accounted for $9.8 billion of that figure, with Google Play users spending $6.5 billion.

Game downloads across both Google Play and the App Store increased by 17.6% in Q3 from 9.5 billion last year to 11.1 billion. 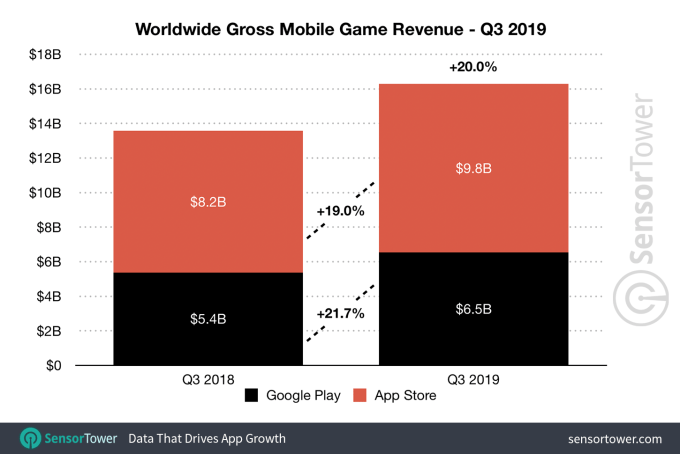 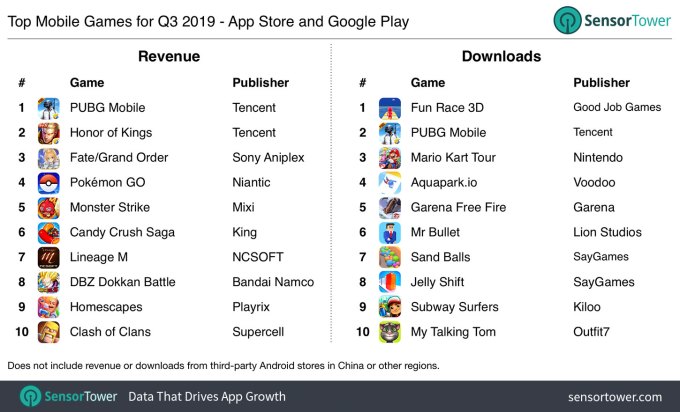 PUBG Mobile was the top-grossing game with $496 million in revenue, up 652% over last year. The No. 2 title, Tencent’s Honor of Kings, and No. 3 Aniplex’s Fate/Grand Order generated $377 million and $354 million, respectively. 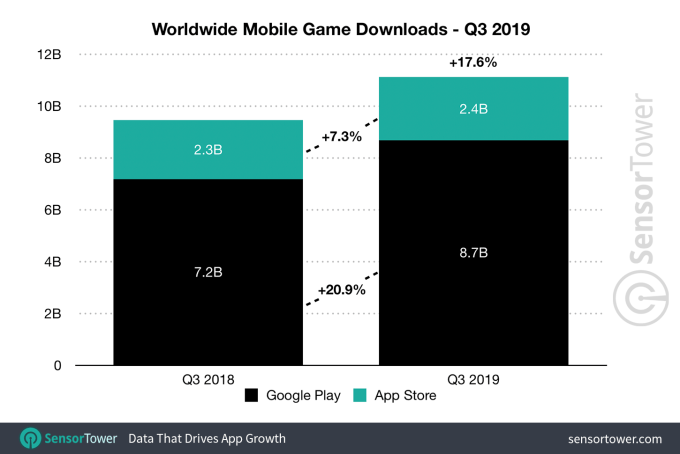 Correction: App Annie estimated nearly 31 billion downloads in Q3, not 23 billion as first written. We corrected this. Apologies for the error.