They’re just not that into you. Or maybe it was a bot? The U.S. Federal Trade Commission on Wednesday announced it has sued Match Group, the owner of just about all the dating apps — including Match, Tinder, OkCupid, Hinge, PlentyofFish and others — for fraudulent business practices. According to the FTC, Match tricked hundreds of thousands of consumers into buying subscriptions, exposed customers to the risk of fraud and engaged in other deceptive and unfair practices.

The suit focuses only on Match.com and boils down to this: Match.com didn’t just turn a blind eye to its massive bot and scammer problem, the FTC claims. It knowingly profited from it. And it made deceiving users a core part of its business practices.

The charges against Match are fairly significant.

The FTC says that most consumers aren’t aware that 25 to 30% of Match registrations per day come from scammers. This includes romance scams, phishing scams, fraudulent advertising and extortion scams. During some months from 2013 to 2016, more than half the communications taking place on Match were from accounts the company identified as fraudulent.

Bots and scammers, of course, are a problem all over the web. The difference is that, in Match’s case, it indirectly profited from this, at consumers’ expense, the suit claims.

The dating app sent out marketing emails (i.e. the “You caught his eye” notices) to potential subscribers about new messages in the app’s inbox. However, it did so after it had already flagged the message’s sender as a suspected bot or scammer. 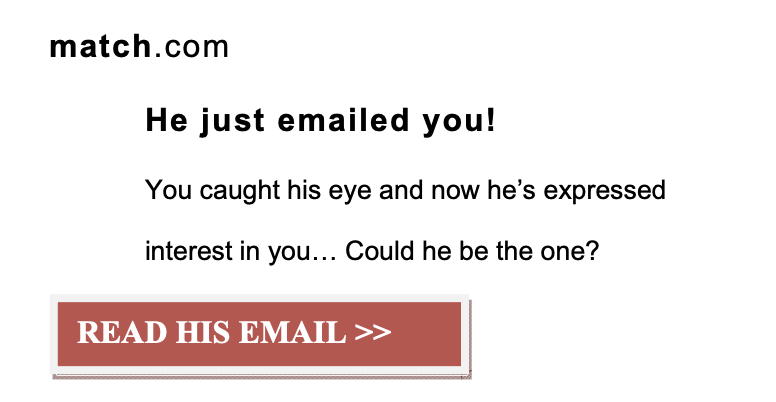 “We believe that Match.com conned people into paying for subscriptions via messages the company knew were from scammers,” said Andrew Smith, director of the FTC’s Bureau of Consumer Protection. “Online dating services obviously shouldn’t be using romance scammers as a way to fatten their bottom line.”

From June 2016 to May 2018, Match’s own analysis found 499,691 consumers signed up for subscriptions within 24 hours of receiving an email touting the fraudulent communication, the FTC said. Some of these consumers joined Match only to find the message that brought them there was a scam. Others joined after Match deleted the scammers’ account, following its fraud review process. That left them to find the account that messaged them was now “unavailable.”

In all cases, the victims were now stuck with a subscription — and a hassle when they tried to cancel.

Because of Match’s allegedly “deceptive advertising, billing, and cancellation practices,” consumers would often try to reverse their charges through their bank. Match would then ban the users from the app.

Related to this, Match is also in violation of the “Restore Online Shoppers’ Confidence Act” (ROSCA) by failing to provide a simple way for customers to stop the recurring charges, the FTC says. In 2015, one Match internal document showed how it took more than six clicks to cancel a subscription, and often led consumers to thinking they canceled when they did not. 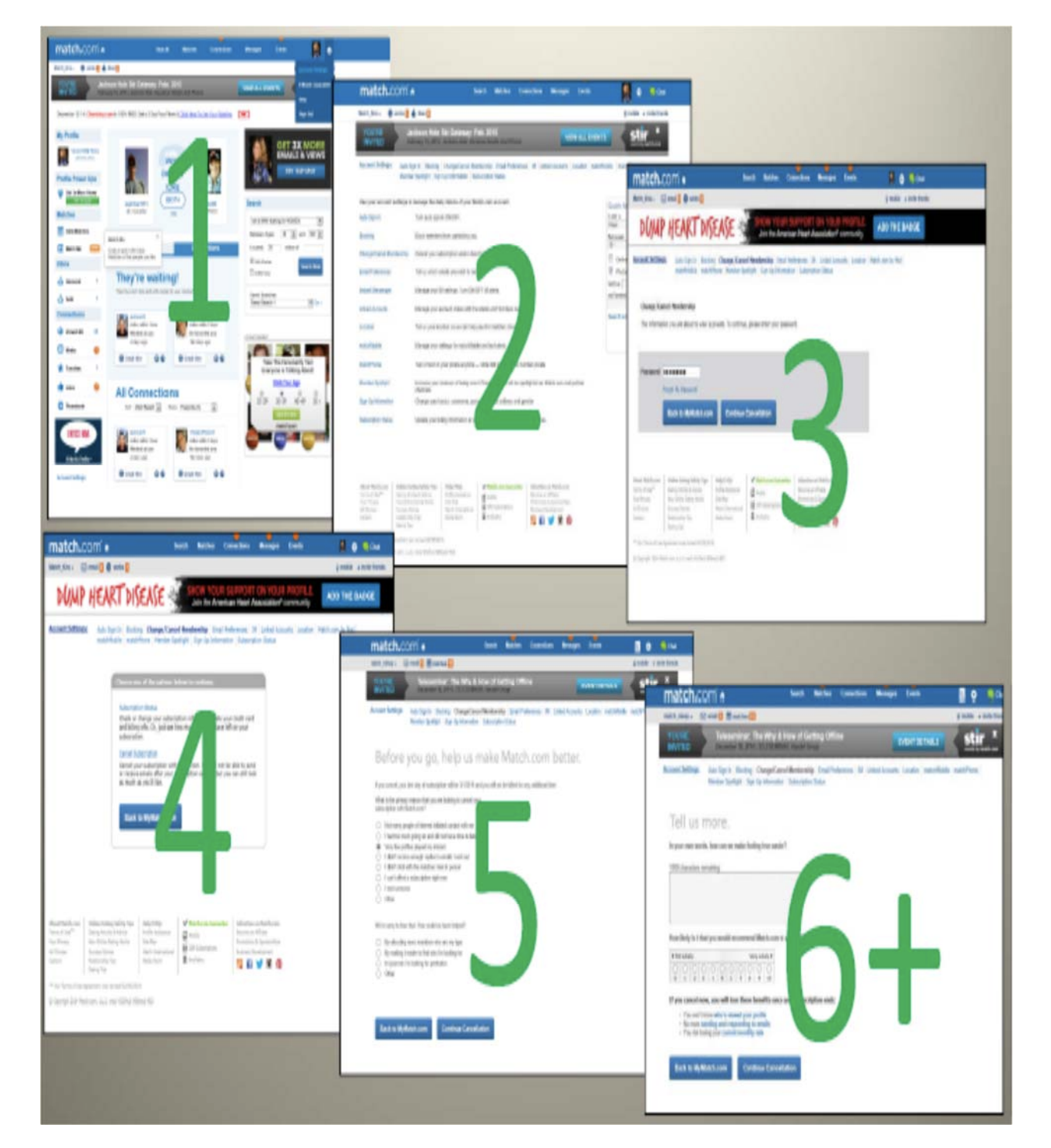 And the suit alleges Match tricked people into free, six-month subscriptions by promising they wouldn’t have to pay if they didn’t meet someone. It didn’t, however, adequately disclose that there were other, specific steps that had to be taken, involving how they had to use their subscription or redeem their free months. 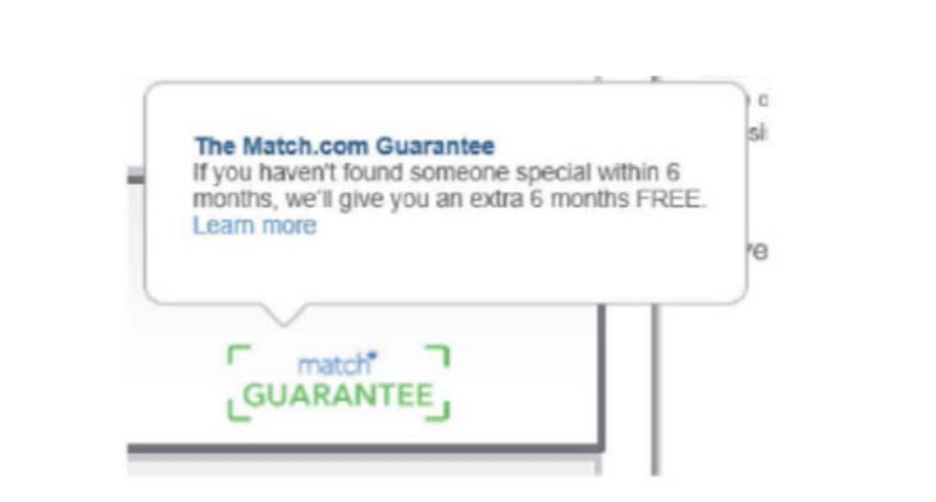 Match, naturally, disputes the matter. It claims that it is, in fact, fighting fraud and that it handles 85% of potentially improper accounts in the first four hours, often before they become active. And it handles 96% of those fraudulent accounts within a day.

“For nearly 25 years Match has been focused on helping people find love, and fighting the criminals that try to take advantage of users. We’ve developed industry-leading tools and A.I. that block 96% of bots and fake accounts from our site within a day and are relentless in our pursuit to rid our site of these malicious accounts,” Match stated, in response to the news. “The FTC has misrepresented internal emails and relied on cherry-picked data to make outrageous claims and we intend to vigorously defend ourselves against these claims in court.”

The Match Group, as you may know, loves to have its day in court.

The FTC’s lawsuit isn’t the only one facing Match’s parent company because it doesn’t (allegedly) play fair.

A group of former Tinder execs are currently suing Match and its controlling shareholder IAC regarding what they say was manipulation of financial data to strip them of their stock options. The suit today continues, even though some plaintiffs said they had to drop out because Match snuck an arbitration clause into its employees’ recent compliance acknowledgments.

Now those former plaintiffs are acting as witnesses, and Match is trying to argue that the litigation funding agreement overcompensates them for their testimony in violation of the law. The judge was concerned that motion was a “smoke screen” and an attempt to “litigate [the plaintiffs] to death until they settle.” (Another hearing may be held to resolve this point; or the agreement may be revised.)

The Match Group also got into it with Tinder’s rival Bumble, which it failed to acquire twice. It filed a lawsuit over infringed patents, which Bumble said was meant to bring down its valuation. Bumble then filed and later dropped its own $400 million suit over Match fraudulently obtaining Bumble’s trade secrets.

In the latest lawsuit, the FTC is asking Match to pay back the “ill-gotten” money and wants to impose civil penalties and other relief. While the financial impacts may not be enough to take down a company with the resources of Match, the headlines from the trial could bring about an increase in negative consumer sentiment over Match and online dating in general. It’s a business that’s become commonplace and normalized in society, but also has a reputation of being a little scammy at times, too. This suit won’t help.

And given that Match Group operates a majority of the U.S.’s top dating apps, that could have a larger, trickle-down effect on its broader business.

The FTC suit is available below.