Yahoo Mail is getting a mobile update, with new versions of the iOS and Android app launching today.

Many of you probably haven’t tried out Yahoo Mail in years, but Senior Director of Product Management Josh Jacobson noted that it’s one of the top productivity apps in the Apple App Store, where it has been rated 2.1 million times, with an average rating of 4.6 stars.

Jacobson also said that Yahoo Mail is trying to do something very different from the Superhumans of the world, because it’s not one of the many apps that “solve for essentially corporate use cases.” Instead, it’s “completely focused on the consumer email use case, solving the business of your life.”

For example, Jacobson said he joined Yahoo after the company acquired his previous employer, the smart inbox service Xobni. (Yahoo, like TechCrunch, is owned by Verizon Media.) At the time, everyone assumed that when it came to helping users find things in email, “search is the way to go.”

Instead, he said it turns out “people just don’t know or want to have to figure out what to type into that imposing white box to find the thing that they’re looking for.” 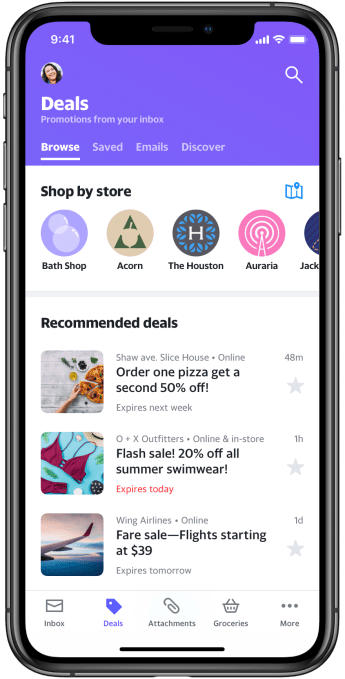 So Yahoo Mail now offers a number of different views that should help you find stuff without searching, by focusing on specific types of content from your inbox.

If you’re looking for a photo or a file that someone sent you, there’s a view that just brings up all your attachments. Or if you’re looking for deals, there are three different views that you use — the overall Deals View, the currently iOS-only Location View (which shows you nearby deals on a map) and Grocery View (which shows you grocery discounts based on your loyalty cards).

Director of Product Management Shiv Shankar noted that while the app is sorting and prioritizing these offers, the deals themselves come from your inbox, not from Yahoo.

The new Yahoo Mail also includes a view for checking all your email subscriptions, and a button that allows you to unsubscribe from any of them with a single tap. And there’s an additional view (also iOS-only for now) focusing on “active updates,” namely pressing and time-sensitive emails, such as package tracking and travel updates.

The Yahoo Mail team has also refreshed the app’s overall look. That includes adding a navigation bar at the bottom of the screen, which Shankar said will make “single-hand usage” possible again, despite the fact that phone screens are getting bigger. The navigation bar is customizable — each user can decide which views to include.

And by the way, if you’re a little leery of sending email from a Yahoo address, Jacobson pointed out that you can use the Yahoo Mail app to access non-Yahoo email accounts, including Gmail and Outlook.