Dietary supplements are used by millions who accept the occasionally scarce evidence they help out with some condition or another. But also scarce is documentation of potential harmful interactions with other supplements or drugs. A new tool called Supp.ai looks through years of health research papers to extract potential conflicts that may not be listed anywhere else.

It’s not meant as a fear-mongering anti-supplement thing, though. The simple fact is that supplements don’t face the same regulations, aren’t studied as closely, and have less clinical documentation than prescription drugs. That leaves the door open for scary situations where a little-known supplement has a dangerous interaction with a drug not commonly taken.

There are a handful of common interactions that some people may know to avoid, but many of them are hidden behind medical industry paywalls, and many not reported at all. But just because they aren’t easily reported doesn’t mean they haven’t been found — the info is just buried somewhere in the thousands of research papers out there. How to find it?

Fortunately researchers at the Allen Institute for AI (AI2) already did a large part of the work with the creation of Semantic Scholar, a natural language processing system that ingests enormous numbers of papers and identifies key words, results, and other aspects, making them able to be easily searched and cross-referenced.

The team repurposed some of this work, tweaking and augmenting it so it could pick out evidence of interactions between supplements and other drugs and organizing them into a single searchable database: Supp.ai.

“Both supplements and drugs are pharmacologic entities, with the distinction more attributable to marketing and social pressures rather than functional differences,” say the researchers in their paper describing the new system.”However, due to this somewhat arbitrary distinction, supplement entities are less well represented in databases of pharmaceutical entities, and less information is publicly available on their interactions. Our work is an attempt to close this gap.”

For instance, deep in some paper looking at a cross-section of the diabetic population, there might be a sentence noting that a person taking a glucosamine supplement saw slower uptake of insulin into the bloodstream. In fact there is such a sentence — dozens of them, actually, as I found out when I searched for glucosamine on the tool. 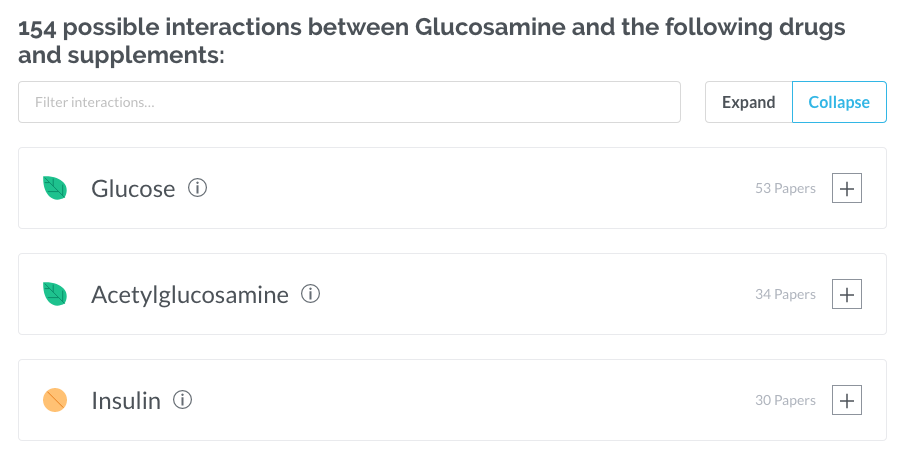 Supp.AI is smart enough to recognize the search term and any abbreviations, like GlcN, and liberally interprets evidentiary sentences so that it errs on the side of inclusion. An interaction may be big or small, helpful or harmful — but what matters is that it was documented, and that a user be made aware of that documentation.

Snippets are provided from the papers, but they’re unlikely to be understood by the average person searching for info on a supplement they’re taking. The intention, however, is more to raise awareness of these potential interactions so that the user can ask their doctor or search for a specific combination they might be worried about.

“Currently, no comprehensive tool exists for consumers to determine if their supplement might interact with other medications. This information is particularly important because there is no law requiring supplement companies to place supplement-drug interactions on the label of dietary supplements,” said Harvard’s Pieter Cohen, who has addressed this before and whom AI2 asked to review the paper.

He suggested Supp.ai will become “an essential resource for consumers,” and that being able to select drug-supplement or supplement-supplement pairs to dive deeper into specific interactions is a natural direction to expand.

Supp.ai is free to use and should be updated with new information “periodically” as new papers are added to the database, but the data used to create the service is also freely available should you want to build your own version or examine the corpus yourself.