Customer experience in the physical world has been getting a major infusion of tech in recent years. We now have systems being built to replace cashiers, sensors in stores and other physical locations to track where customers are walking, and smart mirrors that suggest items you might like to try on. Today, one of the brigade of startups that is enhancing that experience further is announcing a round of funding to fuel its growth.

HappyOrNot — which makes both hardware to record whether customers are satisfied or something a little less positive by tapping a face, usually on their way out of a location, and software to parse and analyse the resulting data the comes out of that input — is today announcing that it has raised $25 million in funding, money that it will use to continue building out its technology and its customer base.

Today, it’s already a 4,000-strong list across 135 countries that includes the likes of McDonald’s, Heathrow Airport, the San Francisco 49ers, and my local swimming pool and hospital here in London. To date, HappyOrNot has record 1.3 billion feedback responses, representing a massive trove of customer sentiment that stretches from basic responses “Yes, I’m happy” or “No, I’m not happy” through to more nuanced answers around why, in the case of their interactive tablets.

(As a point of reference, when it last raised money, $14.5 million in 2017, HappyOrNot had 3,000 customers, CEO and co-founder Heikki Väänänen told me in an interview.)

The funding, a Series A, is taking the total raised by the Finnish company (which also has offices in Florida) to $40 million and is being led by Verdane, with previous investor Northzone — a storied backer of some of the biggest startups to come out of the Nordics — also participating. The valuation is not being disclosed but Väänänen said it was a big boost upwards, as the company works towards a $100 million annual run rate. (It’s not there yet and it’s not profitable.)

The face of retail sales — along with anything else that involves physical interactions with customers — has been irreversibly changed by the rise of the internet. E-commerce has taken away trade, and new digital screen-based services have emerged as strong competitors to more traditional analog experiences. And on top of that, there is now a wide range of tools to measure what customers are doing all the time on these new platforms.

HappyOrNot is giving that physical world a boost at a time when it’s under the gun. Väänänen noted to me that one of the very typical use cases where his company is stepping in, is when a retailer, in order to avoid going out of business because of losses, has had to cut retail staff. Using these terminals, they are able to figure out whether they have enough staff at certain times of the day, and whether they need to rebalance that, given that they will likely be unable to operate a full complement of employees as they had in the past. Sad times, but perhaps better than seeing business shutter altogether.

Väänänen co-founded the company out of his own experience. Working as a games designer — a big industry in Finland — he had a terrible experience at a store when he couldn’t find anyone to help him with his queries. Later, complained about the situation to his friend and coworker Ville Levaniemi. It got Levaniemi thinking and he started looking to see if anything like a measurement company to gauge this kind of sentiment existed already. Turns out, bizarrely in these days of sentiment analysis everywhere you go on the web that it did not, and they right away decided to form this startup.

The games DNA should not be underestimated: the hardware looks not unlike a controller on a games console — or more appropriately like the buttons on an old-school arcade game. And the tablet-version of the interactive console — also sold directly by HappyOrNot to customers — also plays with the idea of gamification. Similarly, he says that the analytics and motivation behind forming the company are also a hat tip to the world of gaming.

“Games are purely about user experience,” Väänänen said. “If gamers they like the games, they play them. Otherwise we go bankrupt. And it’s the same with this. If people didn’t use it, we would have abandoned the idea.” 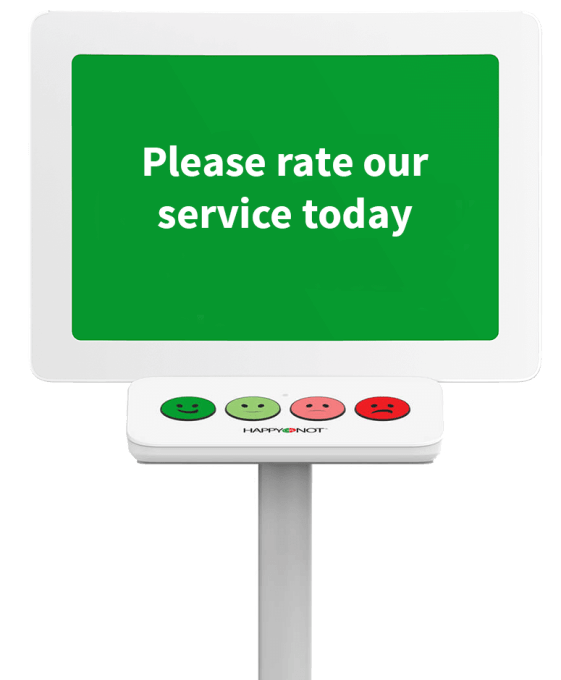 The next stage of its development will likely see HappyOrNot adding in more analytics to its services. Right now, about half of the terminals located across various locations feature tablets rather than the more basic terminals with physical buttons on them. (The decision of which to use is based on how fast typically a client wants to shift customers out of their locations.)

The tablets open the door to getting more details on why customers might be happy or unhappy with their experiences.

“We’re looking forward to helping HappyOrNot scale even further, continue to win major brands as customers, and bolster its analytics and insights capabilities,” said Janne Holmia, Principal at Verdane, in a statement. “With the knowledge we possess as a leading growth equity investor in software, combined with HappyOrNot’s market dominance, and the vast potential of the customer experience market, we are confident that together we will achieve huge success.”

“There is enormous potential in the real time CX analytics market as companies across all industries wise up to how important it is to listen to the opinions of consumers and staff, and act on them in real time,” said Marta Sjögren, Partner at Northzone. “HappyOrNot is known all over the world from their presence in airports, but it’s their growth across retail, healthcare, travel, and lifestyle industries that makes the future really exciting. This is yet another huge milestone in HappyOrNot’s journey to creating a global happiness index, and thereby redefining what good service looks like vertical by vertical. In a world where instant feedback is often mainly broadcast in a one-way communication stream on social media, being able to provide it to staff in the service industry in an actionable, realtime format is truly a game-changer.”