Navin Chaddha Contributor
Navin Chaddha is managing partner at Mayfield, an inception and early-stage investor with more than 50 years of a people-first investing philosophy.
More posts by this contributor

We face two major threats today: one to the health of our planet and the other to our own. The U.N. says the global population will hit 9.7 billion by 2050, meaning more people consuming more natural resources than at any point in human history. Consumption is already doubling every 10-12 years. Add to that the challenges of a warming planet. On the human health front, some 30% of young people under age 20 are obese, 31% of deaths are from cardiovascular disease, and cancer cases are growing at a rate twice as fast as the population.

Fortunately, biology and technology are creating fixes for the planet as well as for the human body. As they do so, they are poised to reinvent countless industries, giving rise to what I believe is a golden age for biology as technology. As Arvind Gupta, the founder of health-science accelerator IndieBio, argued in one recent Medium post, “the twin catastrophes of planetary and human health” will create a $100 trillion opportunity.

Before I tell you how, here is an extremely brief history of the field. Biology, of course, is the original technology. Our tinkering with life’s building blocks, and our ancestor’s manipulation of plants and herbs as medicines and their use of neem branches as toothpaste or the cultivation of plants like corn has been going on for millennia. It wasn’t until the 1970s and 1980s that we saw the first flowering of today’s modern biotech industry.

In 1976, Robert A. Swanson helped launch the birth of biotech when he co-founded Genentech, which became a pioneer in the field of recombinant DNA technology. By creating novel DNA sequences in the lab, Genentech was able to synthesize human insulin for diabetics (1982), and create growth hormones for kids who suffered from a hormone deficiency (1985).

Among the other early leaders in the field was Applied Molecular Genetics (today known as Amgen). In 1989, it won approval for the first recombinant human erythropoietin drugs to treat anemia in people with chronic kidney failure, and later to treat anemia in HIV patients. Last year, the $23.75 billion company’s best-selling drugs were Neulasta, used to prevent infections in cancer patients undergoing chemotherapy, and Enbrel, to treat some autoimmune diseases.

Startups working in these fields are creating entirely new industries, disrupting others and bringing us into what I believe is a golden era of biology as technology.

Today, innovative researchers are building on those early technologies. Among the most promising is the discovery of the CRISPR-Cas9 gene-editing technique. Using what they refer to as molecular scissors, scientists can use CRISPR to edit a living person’s DNA, deleting or repairing damaged sections. Because the changes are made at the genome, the DNA fix is hereditary, unlike previous fixes that affect only the individual patient. The technique promises to slow if not eradicate cancer. It could also prevent sickle cell disease, cystic fibrosis, hemophilia and heart disease.

Notwithstanding the concern over creating designer babies (and the recent controversial creation of the first gene-edited babies in China), it promises to fortify our bodies for us, those of our kids and all succeeding generations. Co-founded by Jennifer Doudna, a leader in the CRISPR field, Mammoth Biosciences is on a mission to leverage the power of CRISPR to democratize disease detection by bringing accurate and affordable testing out of the laboratory and into the point-of-care.

Other technologies, like DNA sequencing, cell engineering and bioprinting, have led to the creation of animal-free protein products, bio fuels for jet engines, lightweight materials stronger than steel and even memory for computer storage. As a result, startups working in these fields are creating entirely new industries, disrupting others and bringing us into what I believe is a golden era of biology as technology.

One successful company is Beyond Meat, which bills itself as the future of protein. With its plant-based meat product, it is trying to address our global population’s need for protein while also tackling the cow problem (they consume land and water and destroy the ozone with their flatulence, not to mention some people think eating them is wrong). The company’s work promises to disrupt the $270 billion global meat industry.

The entrepreneurs at New Culture are also tackling the cow issue. They are using an engineered version of baker’s yeast to make cheese without milk. Unlike other vegan cheeses, made from soy or nuts, this one has been praised as tasting like the real thing. 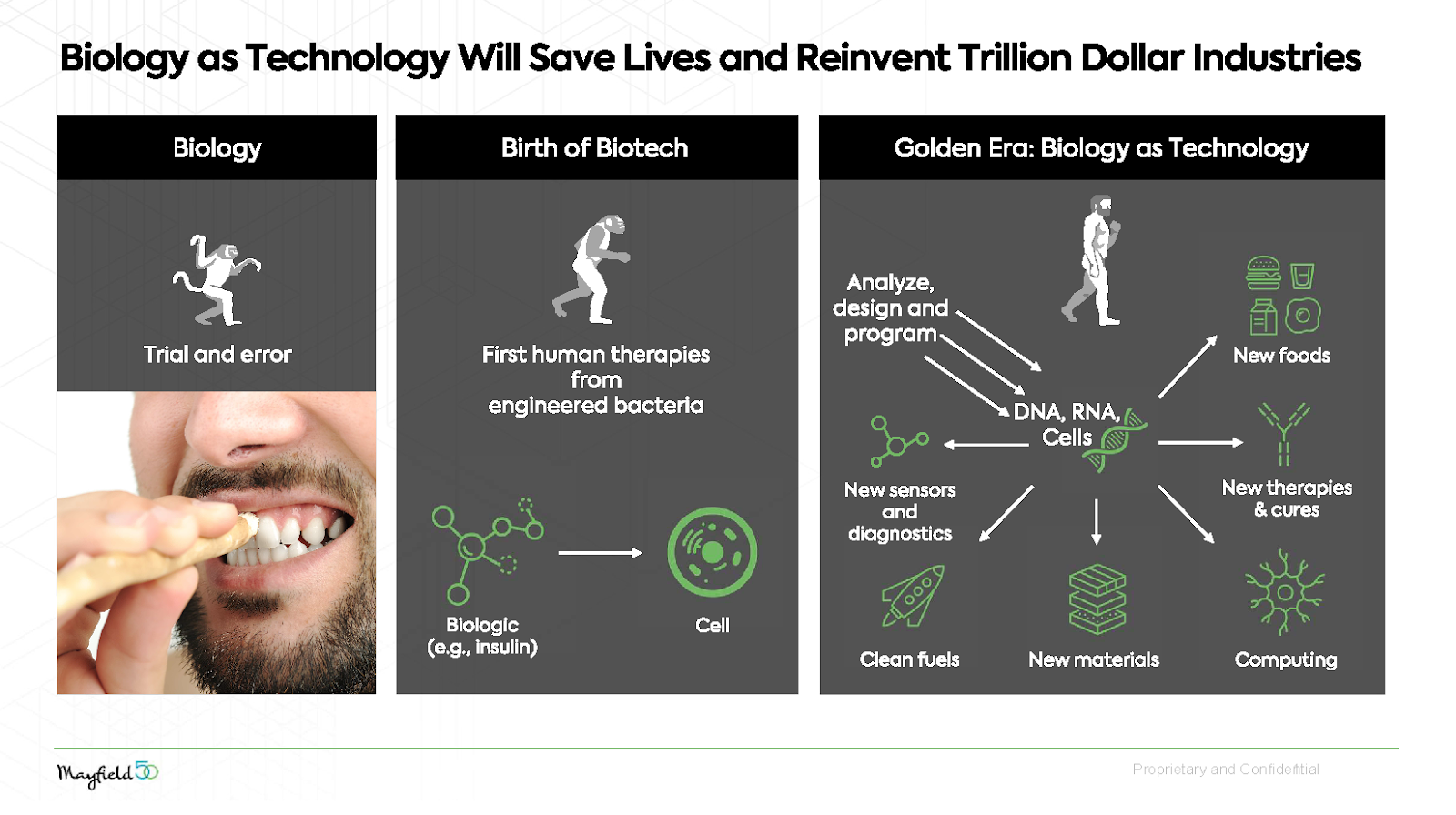 Another area ripe for disruption is our home. The startup Lingrove is trying to lessen our reliance on trees, and the deforestation that comes with it, by creating wood products with flax fiber and bio-epoxy resin. With its Ekoa TP product, Lingrove is targeting the $80 billion interior market, with an eye toward using its products in the construction industry. Another player in this field is bioMASON. The making of concrete contributes massive amounts of carbon to the air. But this company has shown it can “grow” bricks and masonry from sand without using a traditional heating-blasting-process, by infusing the sand with microorganisms that initiates a process like the one that creates coral.

There’s no telling where this golden age of biology as technology will lead.

And then there’s transportation, the No. 1 global contributor of greenhouse gasses. Companies like Amyris are trying to do away with fossil fuels by turning genetically engineered yeast (i.e. sugar) into environmentally friendly gas and jet fuel.

And that’s not all. There are many more biology as technology stories, with innovative companies doing things like turning mushrooms into leather (MycoWorks), molecules into whiskey (Endless West) and bacteria into silk (Bolt Threads). Biology might even reinvent information technology. Scientists have shown how a few grams of DNA can store as much information as an entire data center (Microsoft is working on this). Another company is building computers from neurons (Airbus is a partner).

There’s no telling where this golden age of biology as technology will lead, how many products it will come up with and how many industries it will end up disrupting, or creating. But it seems destined to reinvent trillion-dollar industries and create a healthier planet where we can live longer, healthier lives.

Disclosure: Genentech and Amgen are Mayfield investments from the 1970s and 1980s. Mammoth Biosciences is a current investment.