On the back of the iPhone 11 Pro can be found three cameras. Why? Because the more light you collect, the better your picture can be. And we pretty much reached the limit of what one camera can do a little while back. Two, three, even a dozen cameras can be put to work creating a single photo — the only limitation is the code that makes them work.

Earlier in today’s announcements, Apple showed the base-level iPhone 11 with two cameras, but it ditched the telephoto for an ultra-wide lens. But the iPhone Pro has the original wide, plus ultrawide and telephoto, its optical options covering an approximate 35mm equivalent of 13mm, 52mm and 26mm. 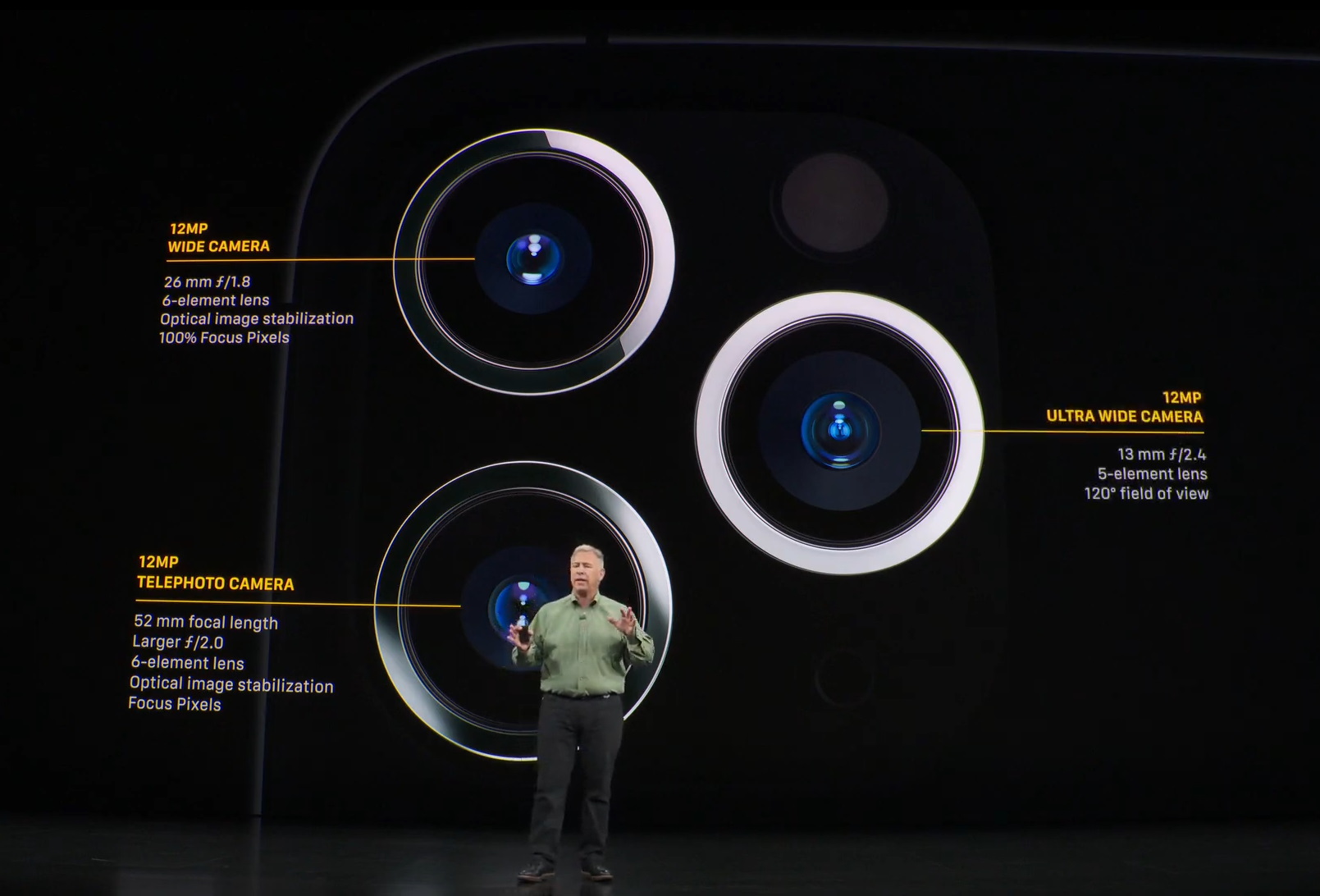 “With these three cameras you have incredible creative control,” said Apple’s Phil Schiller during the stage presentation. “It is so pro, you’re going to love using it.”

Previously the telephoto lens worked with the wide-angle camera to produce portrait mode effects or take over when the user zooms in a lot. By combining the info from both those cameras, which have a slightly different perspective, the device can determine depth data, allowing it to blur the background past a certain point, among other things.

The ultra-wide lens provides even more information, which should improve the accuracy of portrait mode and other features. One nice thing about a wide angle on a dedicated sensor and camera system is the creators can build in lots of corrections so you don’t get crazy distortion at the corners or center. Fundamentally you’ll still want to back off a bit, because using an ultra-wide lens on a face gives it a weird look.

While we’re all used to the pinch-to-zoom-in gesture, what you’re usually doing when you do that is a digital zoom, just looking closer at the pixels you already have. With an optical zoom, however, you’re switching between different pieces of glass and, in this case, different sensors, getting you closer to the action without degrading the image.

One nice thing about these three lenses is that they’ve been carefully chosen to work together well. You may have noticed that the ultra-wide is 13mm, the wide is twice that at 26mm and the telephoto is twice that at 52mm.

The simple 2x factor makes it easy for users to understand, sure, but it also makes the image-processing math of switching between these lenses easier. And as Schiller mentioned onstage, “we actually pair the three cameras right at the factory, calibrating for focus and color.”

Not only that, but when you’re shooting with the wide camera, it’s sharing information with the other two cameras, so when you switch to them, they’re already focused on the same point, shooting at the same speed and exposure, white balance and so on. That makes switching between them mostly seamless, even while shooting video (just be aware that you will shake the device when you tap it).

Apple’s improvements to the iPhone camera system this year are nowhere near as crazy as the switch from one to two cameras made by much of the industry a couple years back. But a wide, tele and ultra-wide setup is a common one for photographers, and no doubt will prove a useful one for everyone who buys into this rather expensive single-device solution.