Clubhouse — the software project management platform focused on team collaboration, workflow transparency and ease of integration — is taking another big step toward its goal of democratizing efficient software development.

Traditionally, legacy project management programs in software development can often appear like an engineer feeding frenzy around a clunky stack of to-dos. Engineers have limited clarity into the work being done by other members of their team or into project tasks that fall outside of their own silo.

Clubhouse has long been focused on easing the headaches of software development workflows by providing full visibility into the status of specific tasks, the work being done by all team members across a project, as well as higher-level project plans and goals. Clubhouse also offers easy integration with other development tools as well as its own API to better support the cross-functionality a new user may want.

Today, Clubhouse released a free version of its project management platform that offers teams of up to 10 people unlimited access to the product’s full suite of features, as well as unlimited app integrations.

The company also announced it will be launching an engineer-focused collaboration and documentation tool later this year, which will be fully integrated with the Clubhouse project management product. The new product, dubbed “Clubhouse Write,” is currently in beta (you can request early access here), but will allow development teams to collaborate, organize and comment on project documentation in real time, enabling further inter-team communication and a more open workflow.

The broader mission behind the Clubhouse Write tool and the core product’s free plan is to support more key functions in the development process for more people, ultimately making it easier for anyone to start dynamic and distributed software teams and ideate on projects. 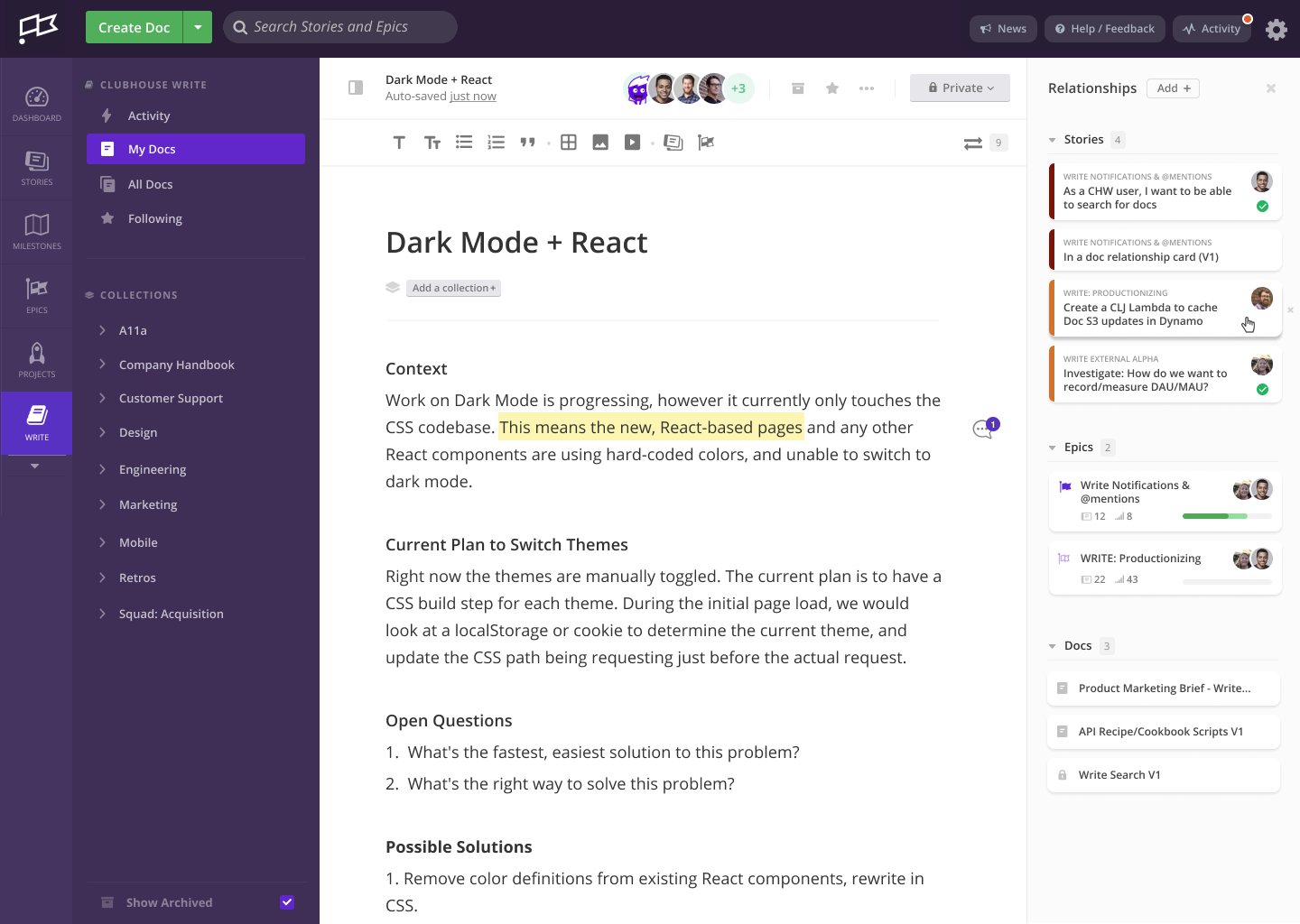 In an interview with TechCrunch, Clubhouse also discussed how the offerings will provide key competitive positioning against larger incumbents in the software project management space. Clubhouse has long competed with Atlassian’s project management tool “Jira,” but now the company is doubling down by launching Clubhouse Write, which will compete head-on with Atlassian’s team collaboration product “Confluence.”

According to recent Atlassian investor presentations, Jira and Confluence make up the lion’s share of Atlassian’s business and revenues. And with Atlassian’s market capitalization of ~$30 billion, Clubhouse has its sights set on what it views as a significant market share opportunity.

According to Clubhouse, the company believes it’s in pole position to capture a serious chunk of Atlassian’s foothold, given it designed its two products to have tighter integration than the legacy platforms, and since Clubhouse is essentially providing free versions of what many are already paying for to date.

And while Atlassian is far from the only competitor in the cluttered project management space, few if any competing platforms are offering a full project tool kit for free, according to the company. Clubhouse is also encouraged by the strong support it has received from the engineering community to date. In a previous interview with TechCrunch’s Danny Crichton, the company told TechCrunch it had reached at least 700 enterprise customers using the platform before hiring any sales reps, and users of the platform already include Nubank, Dataiku and Atrium, amongst thousands of others.

Clubhouse has ambitious plans to further expand its footprint, having raised $16 million to date through its Series A, according to Crunchbase, with investments from a long list of Silicon Valley mainstays, including Battery Ventures, Resolute Ventures, Lerer Hippeau, RRE Ventures, BoxGroup and others.

A former CTO himself, Clubhouse co-founder and CEO Kurt Schrader is intimately familiar with the opacity in product development that frustrates engineers and complicates release schedules. Schrader and Clubhouse CMO Mitch Wainer believe Clubhouse can maintain its organic growth by staying hyperfocused on designing for product managers and creating simple workflows that keep engineers happy. According to Schrader, the company ultimately wants to be the “default [destination] for modern software teams to plan and build software.”

“Clubhouse is the best software project management app in the world,” he said. “We want all teams to have access to a world-class tool from day one whether it’s a 5 or 5,000 person team.”