Apple is doubling down on personalization to help better sell its latest products. In addition to an expanded array of iPhone colors — hello mint green, lilac, etc. — the company today announced the launch of Apple Watch Studio, which will allow consumers to create the Apple Watch case and band pairing that they want, instead of having to choose one designed by Apple.

Before today, Apple would pair its Apple Watch cases with select bands. If you didn’t like the band that came with your Watch, however, you’d have to buy another at your own expense, either from Apple or a third-party seller.

Apple Watch Studio will change that by allowing you to pick the case and band style you prefer, when shopping.

“Apple has always been the best place to help you customize and personalize your products. And now we’re going to take it even further with Apple Watch,” said Deirdre O’Brien, Apple’s senior vice president of Retail + People, speaking at the Apple press event in Cupertino this morning.

The experience will be available starting with the launch of Apple Watch Series 5 at Apple retail stores and online. 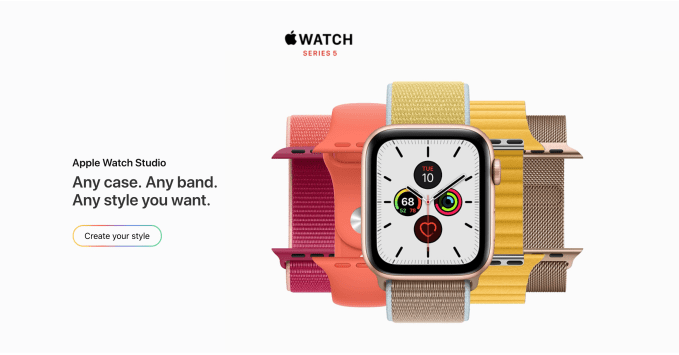 O’Brien said the new experience will offer “over 1,000” different ways for customers to customize their Watch, thanks to the many variations of case and band styles now available.

The Series 5, also announced at today’s event, will offer aluminum models that come in silver, gold and space gray. Its stainless steel models will come in gold, silver and space black and a ceramic model will come in white, plus an all-new titanium model. Apple has also now launched a range of new band styles, some which complement the new colors of the iPhone 11 line.

Effectively, it debuted a fall collection of bands, with bands featuring deeper jewel tones like pine green, midnight blue and aubergine (purple), alongside a few brighter colors like lemons and oranges and of course some classic blacks and browns, among others.

While Apple will still sell Apple Watch case/band pairings on its site, if you scroll down the page you can try out the new Apple Watch Studio starting today. The site displays an image of an Apple Watch that you customize by selecting the size, case and band. These options appear in a horizontal scroll bar, so you can easily tweak the design by clicking over to the next option on the right or left. 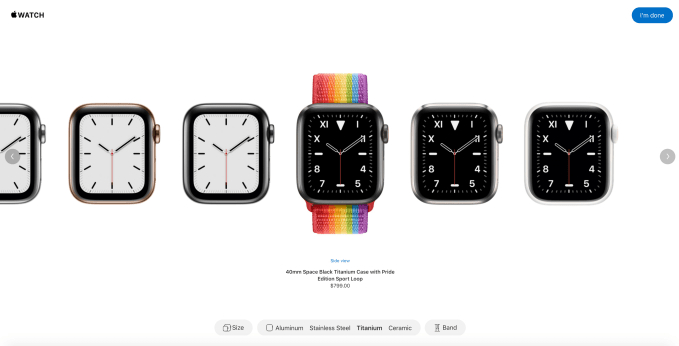 When finished, you just click “I’m Done” and complete the checkout process.

It’s a small change but one that could see more customers sporting bands made by Apple instead of knockoffs, as they’ll get one they actually like at purchase.