Apple today formally announced its launch plans for its new TV streaming service, Apple TV+, which will be available starting on November 1st, 2019 and will cost just $4.99 per month for the whole family. The service will be available across Apple’s platforms in more than 100 countries through the Apple TV app.

It will additionally be available through tv.apple.com on the web, select 2018, 2019 and newer Samsung smart TVs, and on Amazon Fire TV, LG, Roku, Sony and VIZIO platforms in the future. AirPlay 2-enabled Samsung, LG and VIZIO smart TVs will also be able to stream the videos from an iPhone, iPad, iPod touch, or Mac later this year.

As an unexpected surprise, Apple CEO Tim Cook announced that when you buy an Apple device starting on September 10 — including an iPhone, iPad, iPod touch, Mac or Apple TV — you’ll get a year of Apple TV+ for free.

According to Cook, only some of the shows will be available at launch. Others will be added every month.

The $4.99 per month price undercuts all. And bundling a free year with new Apple hardware should boost sales as well.

Apple’s entry into the TV streaming market has been public for some time thanks to leaks and reports from Hollywood media news sites and announcements of programs from Apple itself. The company then officially introduced Apple TV+ this March at a special event focused on the company’s services and subscriptions.

Some of the more anticipated shows arriving include a morning show drama starring Reese Witherspoon and Jennifer Aniston; a Witherspoon-backed comedy based on Curtis Sittenfeld’s “You Think It, I’ll Say It;” a thriller called “Truth Be Told” starring Octavia Spencer; a revival of “Amazing Stories” exec-produced by Steven Spielberg; a new space drama “For All Mankind” from “Battlestar Galactica’s” creator Ronald D. Moore; a show from “La La Land” director Damien Chazelle; an adaptation of Isaac Asimov’s “Foundation;” original shows produced by Oprah Winfrey; a psychological thriller, “Servant,” produced by M. Night Shyamalan; an animated series called “Central Park” from the “Bob’s Burgers” creator and many others.

Despite the numerous high-profile names attached, Apple’s service isn’t really a Netflix alternative. There’s not a big back catalog of licensed TV shows and movies, as you’d find elsewhere. Instead, the focus is on original content. If you want more, Apple TV Channels offers paid subscriptions to other premium services.

As Apple SVP Eddy Cue told attendees at SXSW 2018: “we’re not after quantity, we’re after quality.”

Services, like Apple Music, iCloud and AppleCare have been a bigger focus for Apple in recent years, and may even become its most profitable sector, according to reports. As of its third-quarter earnings, Apple reported its services revenues, which include App Store fees, subscriptions and other online services, had grown to $11.456 billion. At the same time, the iPhone made up less than half of Apple’s business.

The slowing iPhone sales have to do with the quality of the devices — even older models are still very good, and the improvements in new versions are not enough to prompt as frequent upgrades. To diversify, Apple has been focused on growing services revenues with launches like Apple News+, Apple Arcade and now Apple TV+. 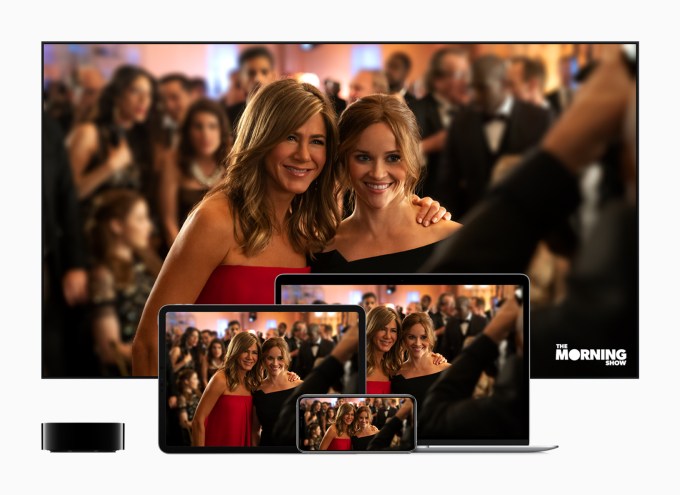 Apple is also clearly willing to spend in order to grow its media business further.

Last year, Apple said it would spend around a billion dollars acquiring 10 shows for the streaming TV service. But it later signed deals with Oprah, Steven Spielberg and Sesame Workshop, which likely pushed that number much higher. A newer report from the Financial Times in August claimed the figure was now around $6 billion instead.

What we don’t yet know is how well Apple’s investment will attract new subscribers in a market where there’s an increasing number of services offering premium, award-winning, on-demand content, including Netflix, HBO, Hulu and soon, Disney+.

The few trailers Apple has released so far have been fairly iffy — the first one of “The Morning Show” almost felt like a parody, while the latest, “Dickinson” seems to have turned the celebrated poet Emily Dickinson into a CW-style feminist punk rock hero.

Apple said today these trailers have been watched more than 100 million times.

At the event, the company unveiled the trailer for the post-apocalyptic drama starring Jason Momoa, “See,” which is Apple TV+’s take on Netflix’s “Bird Box,” apparently. It takes place in a world where all have gone blind. But where “Bird Box” was a bit of fun, “See” looks to take itself more seriously.

As media critics finally get their hands on the shows for reviews, we’ll know more about whether Apple TV+ is worth the price — even though it’s less than we thought.

At launch, the first shows to air on Apple TV+ include “See,” “The Morning Show,” “Dickinson,” “For All Mankind,” “Helpsters,” “Snoopy in Space,” “Ghostwriter,” “The Elephant Queen” and shows from Oprah Winfrey. In the months after launch, Apple will launch “Servant,” “Truth Be Told,” “Little America,” “The Banker” and “Hala.”

Most Apple TV+ series will launch with three episodes, then will roll out new episodes on a weekly basis. Some shows will drop all episodes at once, as Netflix does.

“Our mission for Apple TV+ is to bring you the best original stories from the most creative minds in television and film,” said Cook, speaking to the audience at the iPhone press event today. “Stories that help you find inspiration that are grounded in emotion. Stories to believe in. Stories with purpose,” he said.