There were two standout features I really appreciated off the bat about the original Nest (nee Google Home) Hub: its compact size and its lack of camera. The new Nest Max has decidedly neither of those things.

After releasing a model that offered an interesting alternative to the Echo Show, Google’s taking Amazon’s flagship smart screen head-on with the Max. It’s a device that leverages the learnings of the earlier, smaller model, while applying new use cases.

As far as design goes, Google decided not to mess with a good thing here. The Max is nearly identical to the Hub, albeit scaled up, from seven inches to 10. The form factor is the familiar tablet mounted atop a fabric speaker base. It’s simple, it’s subtle and it will fit in with most decors. Lenovo’s given Google a run for its money with its own Assistant displays, but so far as I’m concerned the Nest line is still the best-looking product in the category. 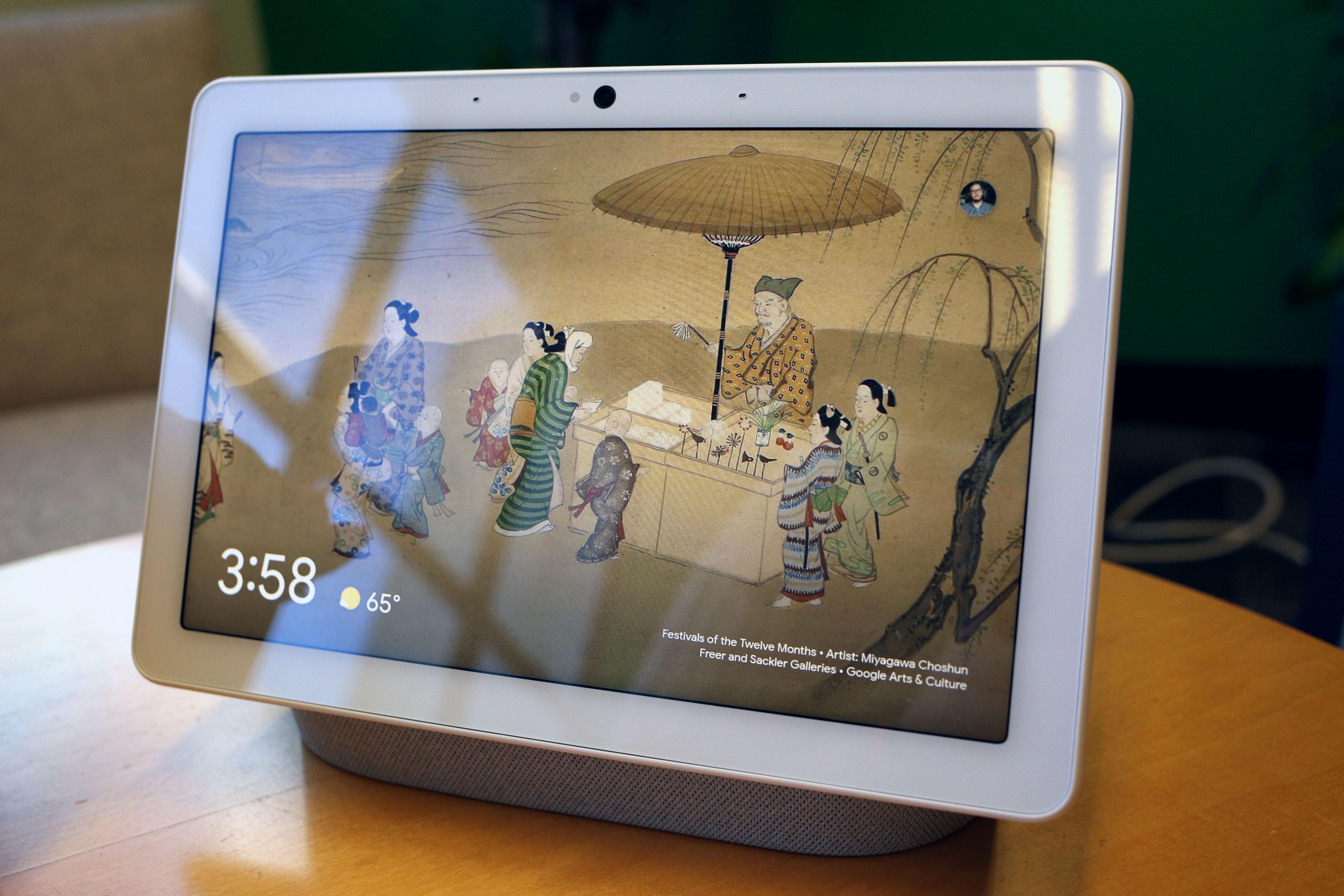 The addition of a camera is really the most radical difference here for a few reasons. The most immediate is, of course, security. Google successfully avoided inserting itself into that conversation with the original Hub. The reason was simple: It was a product designed to live on nightstands. Sure, the topic of privacy is a slippery slope that most of us have already tumbled halfway down, but for many, the idea of introducing a cloud-connected camera into the bedroom was understandably a bridge or two too far.

Facebook, notably, stepped into yet another hornets’ nest when it launched its camera-sporting Portal device amid its own privacy scandal(s) — and rightfully so. Google, however, has inserted itself back into that conversation with Hub Max. Put in the company’s position, one would imagine doing as much as possible to ease users’ peace of mind about privacy concerns.

A physical shutter is a pretty quick and easy way to do precisely that. It’s a helpful sort of shorthand — heck, even Facebook included a clip-on shutter in hopes of nipping some of those concerns in the bud. It’s honestly a bit baffling that Google didn’t do the same — a strange oversight it appears to have made largely for aesthetic reasons. 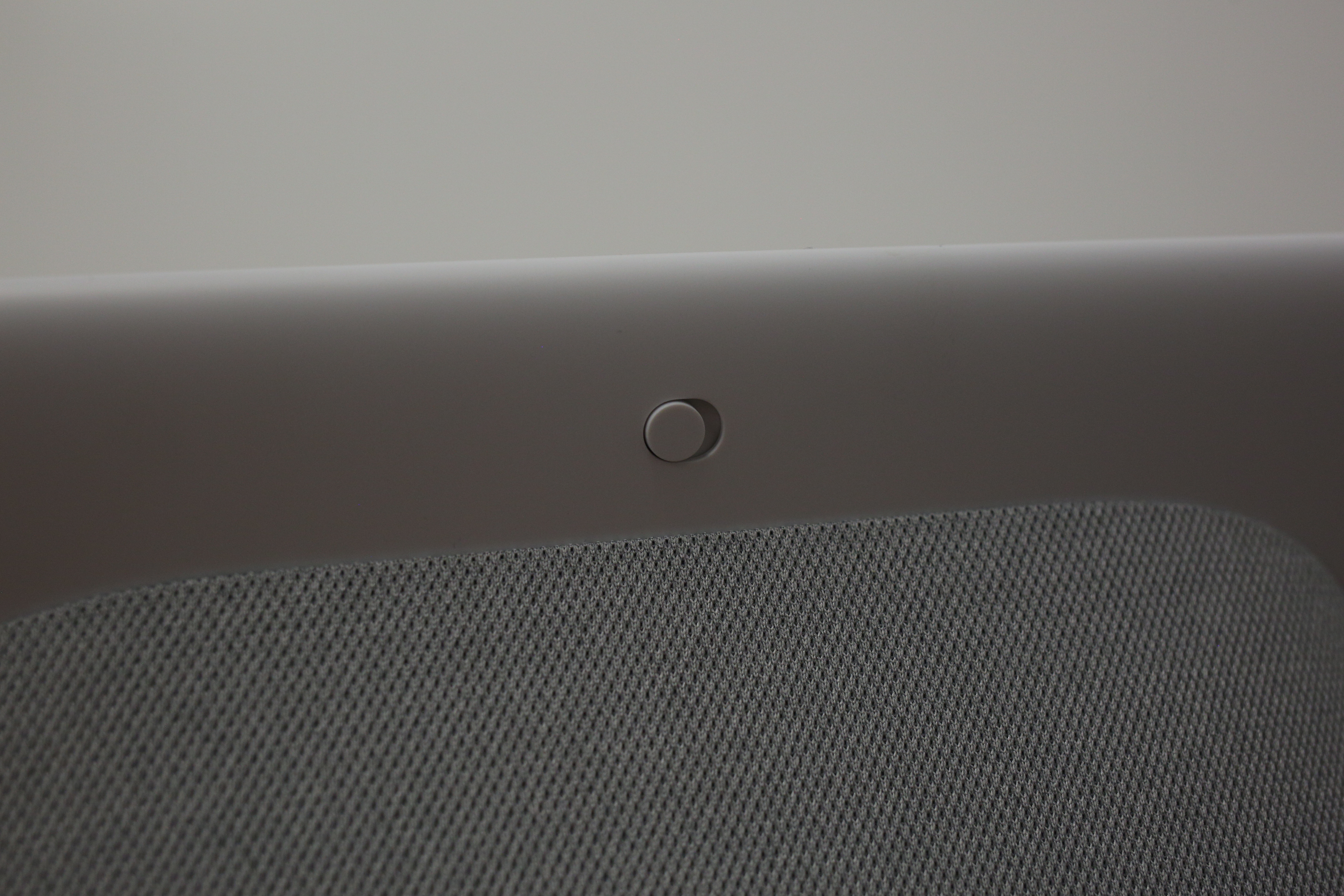 There is, of course, a switch in the rear, which turns off both the microphone and camera, illuminating a red light to the side of the camera in the process. That a red light can both indicate either camera off or record on different devices is a design conversation for another day, I suppose.

But Google’s decision to include a camera isn’t arbitrary. The truth is that it effectively unlocks a whole slew of new functionality here and further distinguishes Nest Hub products from Amazon’s offerings. And, naturally, it also unlocks further privacy concerns in the process. The biggest piece of the puzzle is a kind of personalization that wouldn’t be accessible through other means. 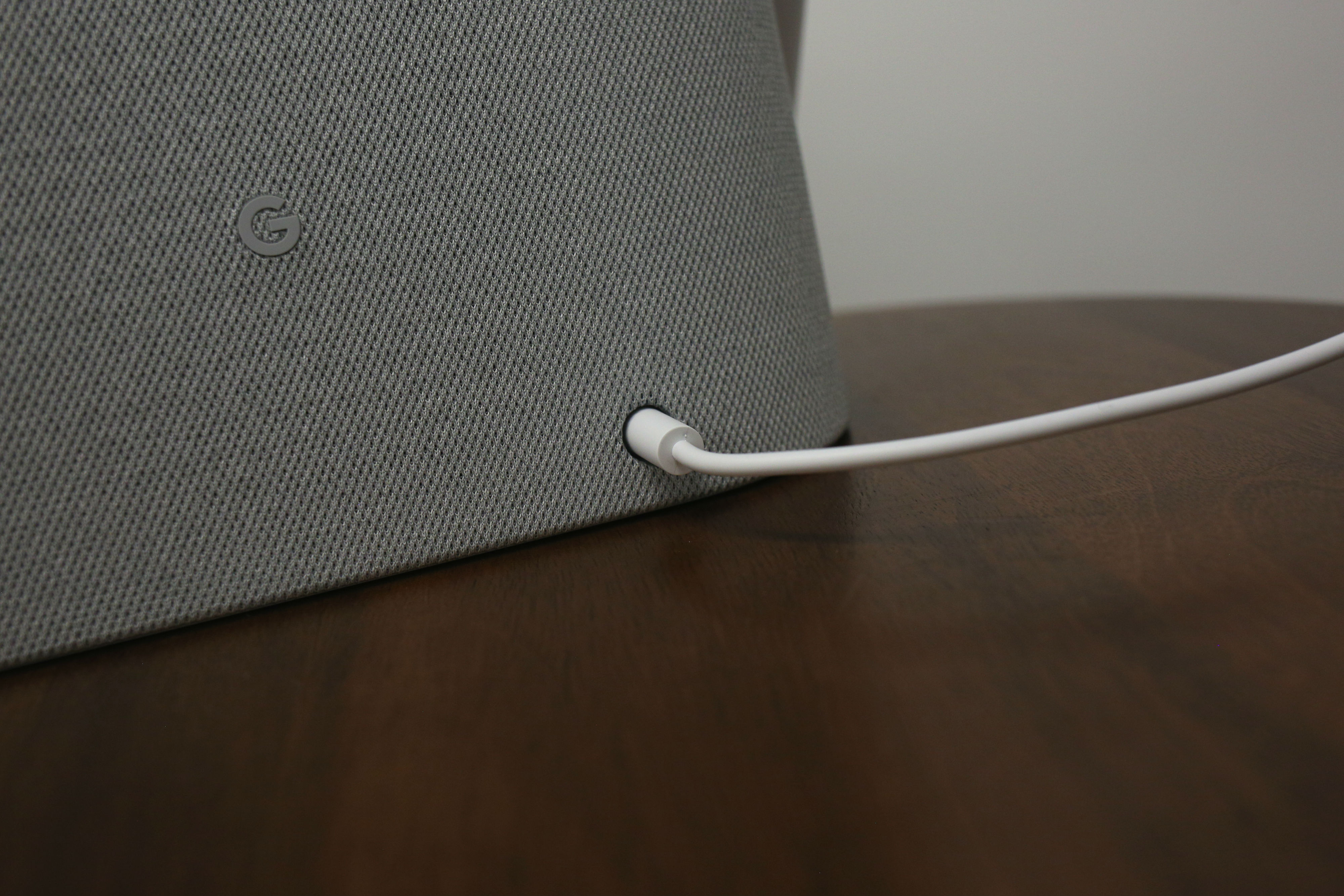 During setup, the device walks you through a similar process that smartphones implement to enable unlock. Using your phone’s camera, it grabs a 3D image of your face. When the Nest Hub Max spots you, it will greet you with a note along the lines of “Good afternoon, Brian,” and the image of you associated with your Google profile. When you’re locked in, the device tailors all of its suggestions to you. It’s a clever way of swapping between accounts.

Of course, like so many other things, it feels like a bit of a slippery slope. Google, of course, has already identified the sound of your voice, which it can also use to provide bespoke content, but that’s a less dynamic approach to this kind of implementation. You can certainly opt out, though you’ll be missing out on a reasonably large piece of the puzzle here. 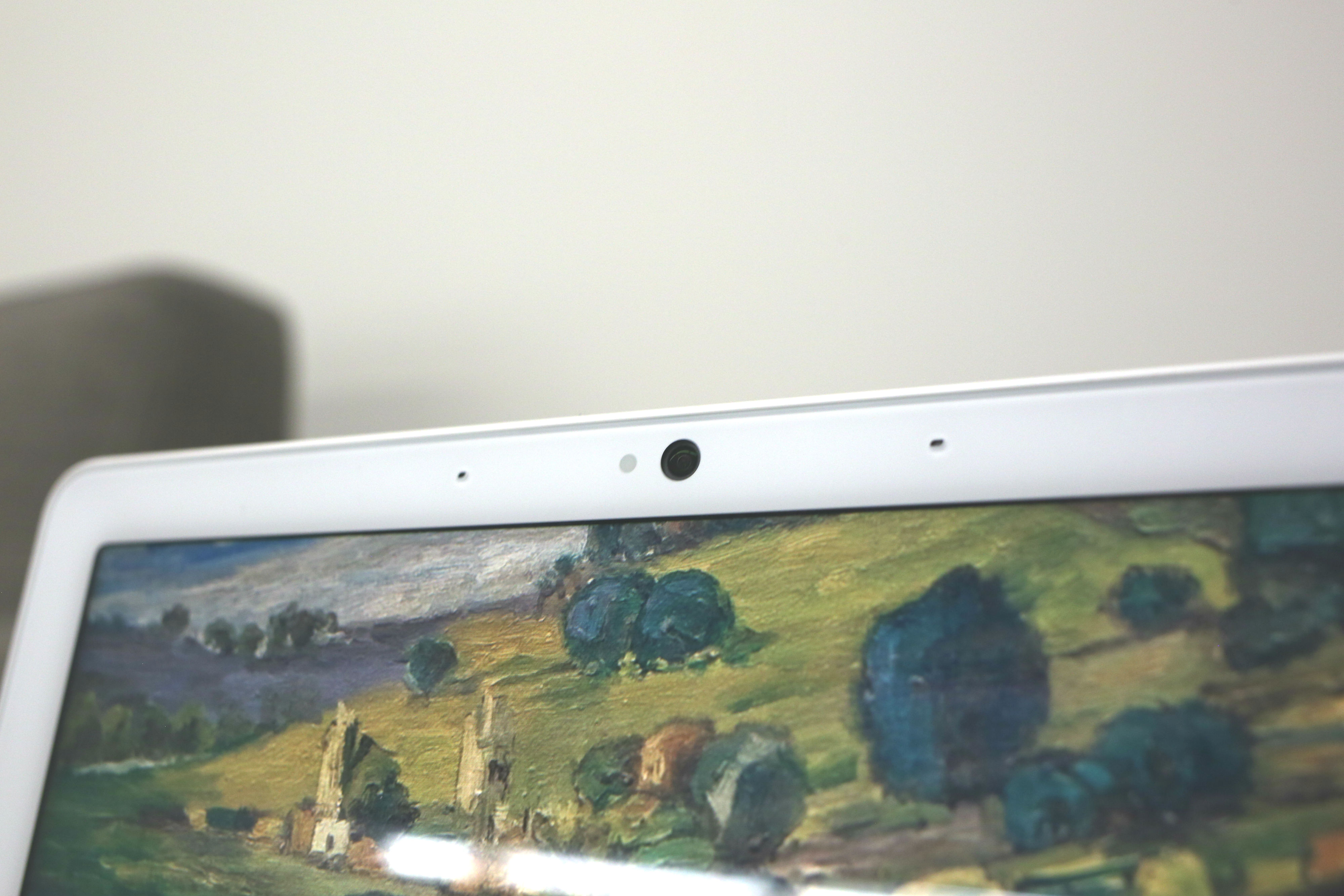 The camera also brings the ability to video chat through Duo. The Hub Max utilizes a similar zoom feature as Facebook’s Portal — a dynamic pan that was initially positioned as that product’s killer app. Implementation here is similarly effective, moving and zooming out to follow the subject and included additional people at once. The digital zooming does notably degrade image quality, however.

The other big piece of the puzzle is security camera functionality. It is, after all, a Nest device. Given that it’s not a devoted security product, however, Google is positioning that feature as more of a supplement to existing Nest devices. In other words, you place your Nest Cam in key areas and use the Hub Max’s camera to fill in the gaps. It works similarly to those devoted devices (including features like geofencing), though it lacks some features like night vision. 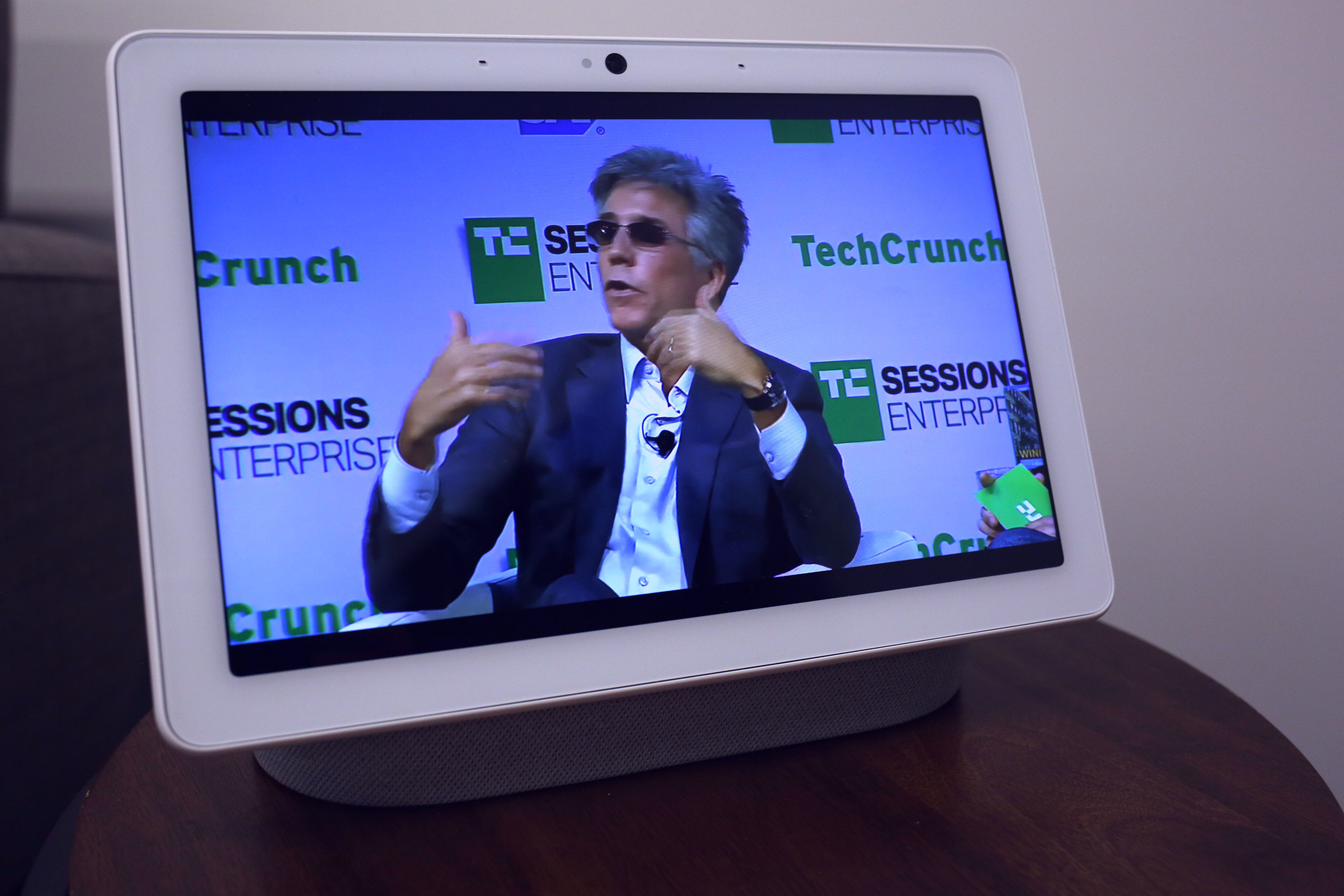 Handily, the device will let you know when it’s being used as a camera, sporting a “Nest Cam being viewed” notification, for added privacy. And, of course, it can be used with a variety of other connected cameras and smart home devices, serving as a kind of centralized control panel. There are a handful of compatible video services that can be added on set up, including HBO Now and CBS. No Netflix at the moment — and likely no Amazon Prime, ever, though Chromecast functionality addresses that to some degree.

The bottom speaker is bigger, louder and bassier (and stereo, to boot) than the original Home Hub. But it’s probably not sufficient for most as a standalone speaker. That said, the ability to pair it with another Home speaker makes it a nice companion to something like the Home Max, with the inclusion of a screen that displays and serves as a control panel while you’re listening to music. 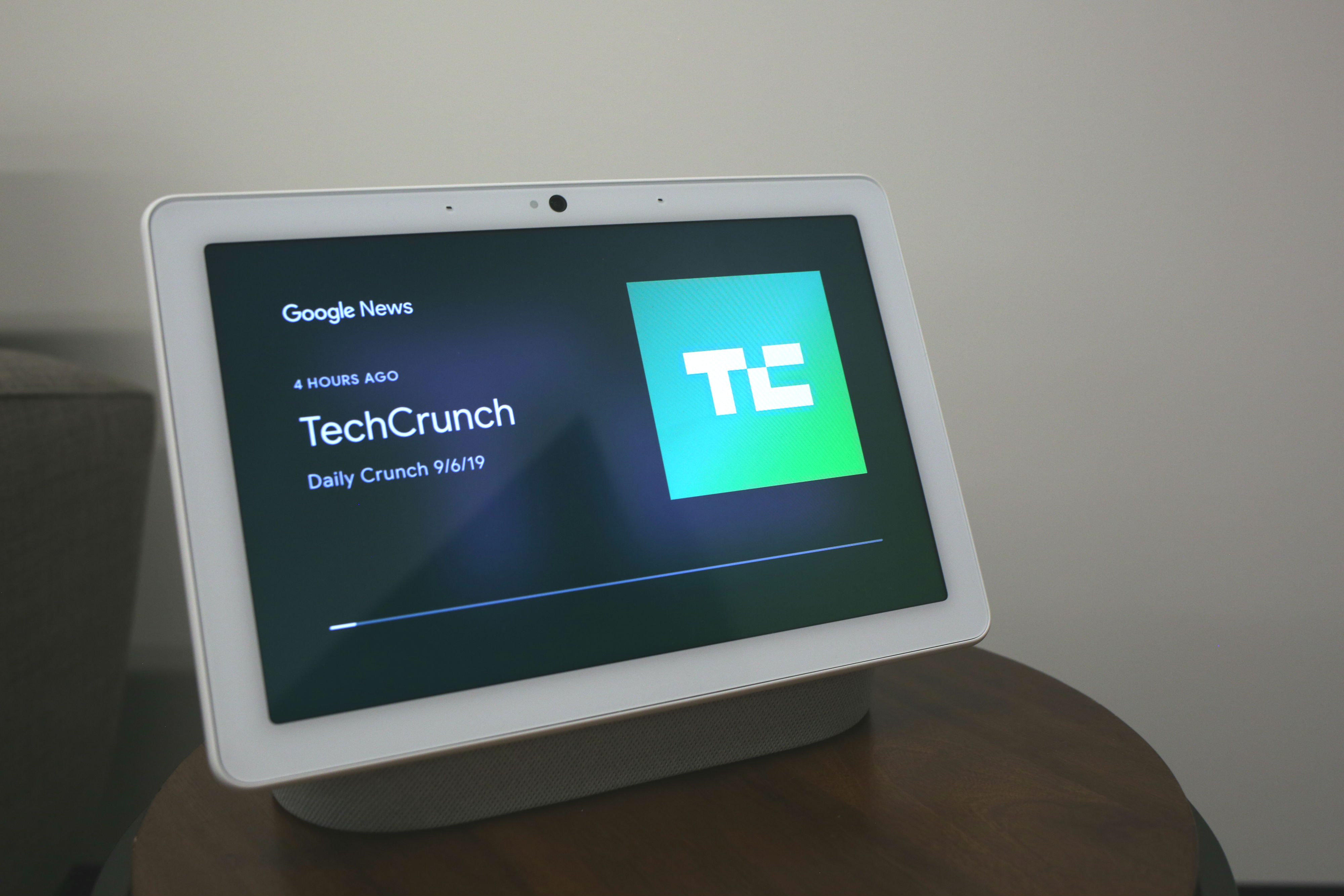 Notably, there are only two mics on board — fewer than many comparable smart home devices. In spite of the mics and improved sound, however, Google hasn’t built in the spatial-based level tuning you get on the higher-end Home Max.

At $229 (and available now), the Nest Hub Max is priced to compete with the Echo Show. It’s a stronger entry in most respects, and while the camera carries the aforementioned privacy concerns, it’s a clear sign of how Google’s strengths are coming together to create a superior smart home product.