Mo Gawdat, the former Google and Google X executive, is probably best known for his book Solve for Happy: Engineer Your Path to Joy. He left Google X last year. Quite a bit has been written about the events that led to him leaving Google, including the tragic death of his son. While happiness is still very much at the forefront of what he’s doing, he’s also now thinking about his next startup: T0day.

To talk about T0day, I sat down with the Egypt-born Gawdat at the Digital Frontrunners event in Copenhagen, where he gave one of the keynote presentations. Gawdat is currently based in London. He has adopted a minimalist lifestyle, with no more than a suitcase and a carry-on full of things. Unlike many of the Silicon Valley elite that have recently adopted a kind of performative aestheticism, Gawdat’s commitment to minimalism feels genuine — and it also informs his new startup. 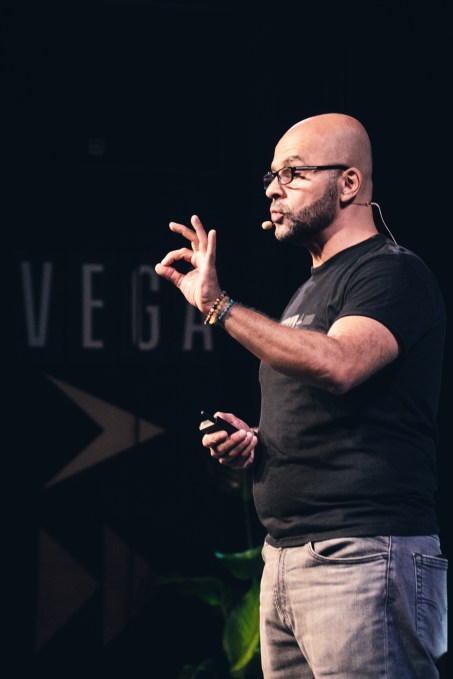 “In my current business, I’m building a startup that is all about reinventing consumerism,” he told me. “The problem with retail and consumerism is it’s never been disrupted. E-commerce, even though we think is a massive revolution, it’s just an evolution and it’s still tiny as a fraction of all we buy. It was built for the Silicon Valley mentality of disruption, if you want, while actually, what you need is cooperation. There are so many successful players out there, so many efficient supply chains. We want the traditional retailers to be successful and continue to make money — even make more money.”

What T0day wants to be is a platform that integrates all of the players in the retail ecosystem. That kind of platform, Gawdat argues, never existed before, “because there was never a platform player.”

That sounds like an efficient marketplace for moving goods, but in Gawdat’s imagination, it is also a way to do good for the planet. Most of the fuel burned today isn’t for moving people, he argues, but goods. A lot of the food we buy goes to waste (together with all of the resources it took to grow and ship it) and single-use plastic remains a scourge.

How does T0day fix that? Gawdat argues that today’s e-commerce is nothing but a digital rendering of the same window shopping people have done for ages. “You have to reimagine what it’s like to consume,” he said.

The reimagined way to consume is essentially just-in-time shipping for food and other consumer goods, based on efficient supply chains that outsmart today’s hub and spoke distribution centers and can deliver anything to you in half an hour. If everything you need to cook a meal arrives 15 minutes before you want to start cooking, you only need to order the items you need at that given time and instead of a plastic container, it could come a paper bag. “If I have the right robotics and the right autonomous movements — not just self-driving cars, because self-driving cars are a bit far away — but the right autonomous movements within the enterprise space of the warehouse, I could literally give it to you with the predictability of five minutes within half an hour,” he explained. “If you get everything you need within half an hour, why would you need to buy seven apples? You would buy three.”

Some companies, including the likes of Uber, are obviously building some of the logistics networks that will enable this kind of immediate drop shipping, but Gawdat doesn’t think Uber is the right company for this. “This is going to sound a little spiritual. There is what you do and there is the intention behind why you do it,” he said. “You can do the exact same thing with a different intention and get a very different result.”

That’s an ambitious project, but Gawdat argues that it can be done without using massive amounts of resources. Indeed, he argues that one of the problems with Google X, and especially big moonshot projects like Loon and self-driving cars, was that they weren’t really resource-constrained. “Some things took longer than they should have,” he said. “But I don’t criticize what they did at all. Take the example of Loon and Facebook. Loon took longer than it should have. In my view, it was basically because of an abundance of resources and sometimes innovation requires a shoestring. That’s my only criticism.”

T0day, which Gawdat hasn’t really talked about publicly in the past, is currently self-funded. A lot of people are advising him to raise money for it. “We’re getting a lot of advice that we shouldn’t self-fund,” he said, but he also believes that the company will need some strategic powerhouses on its side, maybe retailers or companies that have already invested in other components of the overall platform.

T0day’s ambitions are massive, but Gawdat thinks that his team can get the basic elements right, be that the fulfillment center design or the routing algorithms and the optimization engines that power it all. He isn’t ready to talk about those, though. What he does think is that T0day won’t be the interface for these services. It’ll be the back end and allow others to build on top. And because his previous jobs have allowed him to live a comfortable life, he isn’t all that worried about margins either, and would actually be happy if others adopted his idea, thereby reducing waste.