Yesterday, Hulu began rolling out an updated version of its mobile app sporting the brand-new interface the company first unveiled at CES in January. However, it was missing one of the pre-announced and more-requested features: Hulu’s revamped and expanded live TV guide. Today, that updated Live Guide is launching — but only to select TV platforms for the time being.

The updated Live Guide is coming today to Hulu.com on the web, Roku devices and Apple TV.

As promised at CES, Hulu’s expanded TV guide will now allow viewers to scroll to see what’s airing in the next two weeks, as well as schedule recordings on upcoming shows, movies and sporting events.

It’s also easier to navigate, as filters like “Recent,” “My Channels,” “News,” “Movies” and “Kids” have now been relocated from the top of the grid to the left-hand side.

A green vertical line with a lightning bolt icon overlaid on the guide will help you to visualize how much of the program or movie has aired so far. 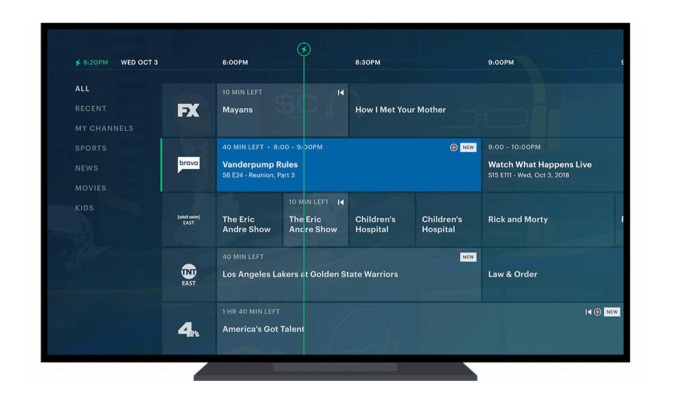 Users also can add channels from the guide to their “My Channels” list, which is now available from the Live Guide itself, as well as from the Home page.

This update follows Hulu’s revamp of its mobile app on Tuesday, which dropped the confusing “Lineup” section from the Home screen while adding a way to see more content in each section.

Getting the Hulu interface right is a big priority for the company, given that its last big makeover didn’t go down all that well. At one point, a complaint about Hulu’s redesign became the most-upvoted item on the company’s user feedback forums, as many agreed that Hulu’s user interface was too difficult to navigate and had a confusing layout.

In the many months since, Hulu has been working to make changes to address user complaints by rolling out the live grid guide initially, then tweaking its appearance and functionality over time.

Unlike Sling TV, PlayStation Vue or YouTube TV, for example, Hulu has been challenged with merging its vast on-demand library and original content with a more traditional live TV service.

Today, Hulu with Live TV is available on a range of devices — including the web, mobile, Apple TV, Fire TV, Echo Show, Xbox One, Windows 10, Chromecast, Android TV, Nintendo Switch, VIZIO SmartCast TVs and select Samsung and LG smart TVs. But the updated Live Guide is only coming to a subset of those — Hulu.com on the web, Roku and Apple TV — as of today.

Hulu says it will roll out to more platforms and devices “soon.”