Earlier this year, the world turned very sour on a group of rich and famous parents who were exposed for having paid big money to get their not-so-academic offspring into competitive universities, using tactics like cheating on tests and more to get those offers. But even if you put illegal manoeuvres to one side, money and power have (frustratingly) long played roles in gaming the system to access higher learning.

Now, a startup that’s created an alternative route for those who are smart and willing to put in the work to get into those hallowed halls has raised some funding as it continues to grow. New Zealand’s Crimson Education, which has built a tech platform and consulting service to help students identify top schools and what they need to do in terms of academic and other activity to get in, has closed a $5 million round of funding. With this latest investment, the company is now valued at $245 million post-money, a big jump on the $160 million (NZ$220 million) valuation Crimson had in 2016 when Tiger Global invested $30 million.

This latest is a small but strategic round: The money is coming from Solborn Investment, the VC arm of the Korean holding company Solborn, and it’s specifically aimed at helping Crimson build out its business in that country (Korea has a huge population of young people who are very keen to study outside the country). The startup has raised $42 million to date, and from what we understand it’s quietly gearing up to raise another round to double down on another new market for the company: students in the U.S., looking for better guidance to get into schools in the U.S.

The leap in Crimson’s valuation is due to the startup’s success, both in terms of student achievements and the business model that has been built around this.

The company currently works with 1,500 tutors and has had 20,000 students use its platform to date. There have been more than 60 offers to Crimson students for places at Ivy League schools; a further 160+ to Oxford, Cambridge and other competitive schools; and more than 500 successful applications to the top 50 universities in the U.S.

As for the business model, pricing varies depending on the stage of the student (it offers programs for kids as young as 11), and what that student does — e.g. straight SAT tutoring or a full-service program that includes identifying schools, getting the right qualifications in order and applying — but in either case, it’s lucrative for Crimson. The average revenue per student in the U.S. ranges between $5,000 and $10,000. Tutoring starts at $80 per hour, and $2,000 per module for the younger program.

These costs are not small — you might even say it sounds like an extra year or two of college education — and indeed, some 15% of students get some form of financial aid to use Crimson.

Crimson was started in 2014 after one of the founders, Jamie Beaton, decided he wanted to apply to top schools beyond his native New Zealand. He eventually ended up at Harvard, and on the way he identified a gap in the market for international students who wanted to do the same but found navigating how to map one country’s educational system and experience onto another’s. So, he decided to build his own experience and methods into a business with two equally ambitious co-founders (Sharndre Kushor, pictured below with Beaton, and Fangzhou Jiang). He was still a student at Harvard when the startup was incorporated, hence the “Crimson” of the name. 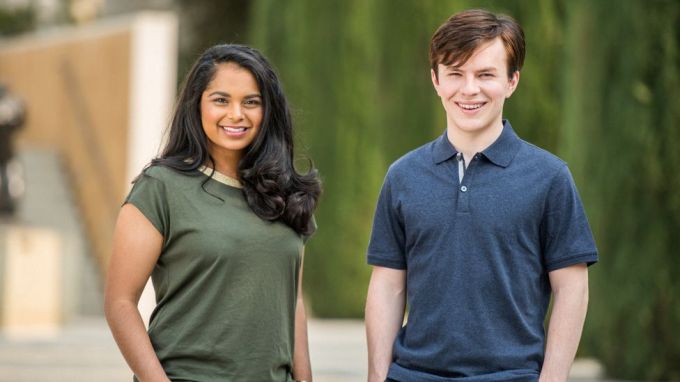 The company today is based around not just a network of human tutors, but a set of proprietary algorithms to identify what a student needs to do and the likelihood of achieving it, an app, a popular YouTube channel, a Q&A board and a “philanthropy” arm focused on providing financial aid to people to use Crimson, and to help Crimson students access and get scholarships and other financial aid to study.

Initially focused on international students who need help navigating the waters of applying to schools elsewhere, it turns out that domestic students need and want the same kind of advice and help, too.

Beaton is now 24, and unsurprisingly has become something of a poster child for Crimson because of his own grit-and-determination success.

But to be clear, Beaton was not your average high school student, and he isn’t even your average over-achiever.

Before he turned 18, he’d done some 10 A-Levels (somewhat akin to AP exams in the U.S., but more rigorous. Focused on the whole of your last two years of school and mandatory, most people take only three focused on what they eventually want to major in as an undergrad).

Beaton had made the effort to engage outside tutors for all the subjects that his New Zealand high school could not accommodate, and engaged others to help him prepare for U.S.-specific exams like the SAT, as well as work through the application process for the many schools whose admissions applications he filled out.

And since his undergrad years at Harvard, where he studied applied mathematics, he received a masters at Harvard in the subject, then an MBA and a masters of education at Stanford, and is now a Rhodes Scholar at Oxford studying public policy.

So as the company continues to grow, it will be worth watching how it navigates its brand, its message and the inevitable involvement of more than the early adopting high-achievers who have used Crimson to date.

That is to say, the company naturally attracts parents and kids who — even if they are only fractionally as self-motivated as Beaton seems to be — will already have a lot of focus and academic ability and may therefore be predisposed to succeeding through the platform. How will that change as it grows in popularity, and how will Crimson measure its success?

In answer to the question, Beaton said that there is already a lot of academic analysis in place to make sure that Crimson is not effectively an echo chamber, providing help to those who are already well along the way to academic success. “When we bring a student on board we do a lot of academic assessments,” Beaton said. “We then look at baseline achievement level, and we can use that to track our contribution.”

Similarly, the aim is not just for prestigious schools — even though that is essentially what it is right now — it’s to find the right school and right subject for the right person.

If Crimson can capture that successfully, there is a lot of potential for the company to transcend the university admissions use case and provide an effective platform to replace those slightly stilted, standardised careers quizzes that exist today to help wayward teenagers figure out what they might want to do, and how to get there.

“This is about helping to unlock future opportunities and providing advice,” Beaton said. “You can’t just push students into something.”