OKRs, or Objectives and Key Results, are a popular planning method in Silicon Valley. Like most of those methods that make you fill in some form once every quarter, I’m pretty sure employees find them rather annoying and a waste of their time. Ally wants to change that and make the process more useful. The company today announced that it has raised an $8 million Series A round led by Accel Partners, with participation from Vulcan Capital, Founders Co-op and Lee Fixel. The company, which launched in 2018, previously raised a $3 million seed round.

Ally founder and CEO Vetri Vellore tells me that he learned his management lessons and the value of OKR at his last startup, Chronus. After years of managing large teams at enterprises like Microsoft, he found himself challenged to manage a small team at a startup. “I went and looked for new models of running a business execution. And OKRs were one of those things I stumbled upon. And it worked phenomenally well for us,” Vellore said. That’s where the idea of Ally was born, which Vellore pursued after selling his last startup.

Most companies that adopt this methodology, though, tend to work with spreadsheets and Google Docs. Over time, that simply doesn’t work, especially as companies get larger. Ally, then, is meant to replace these other tools. The service is currently in use at “hundreds” of companies in more than 70 countries, Vellore tells me.

One of its early adopters was Remitly. “We began by using shared documents to align around OKRs at Remitly. When it came time to roll out OKRs to everyone in the company, Ally was by far the best tool we evaluated. OKRs deployed using Ally have helped our teams align around the right goals and have ultimately driven growth,” said Josh Hug, COO of Remitly. 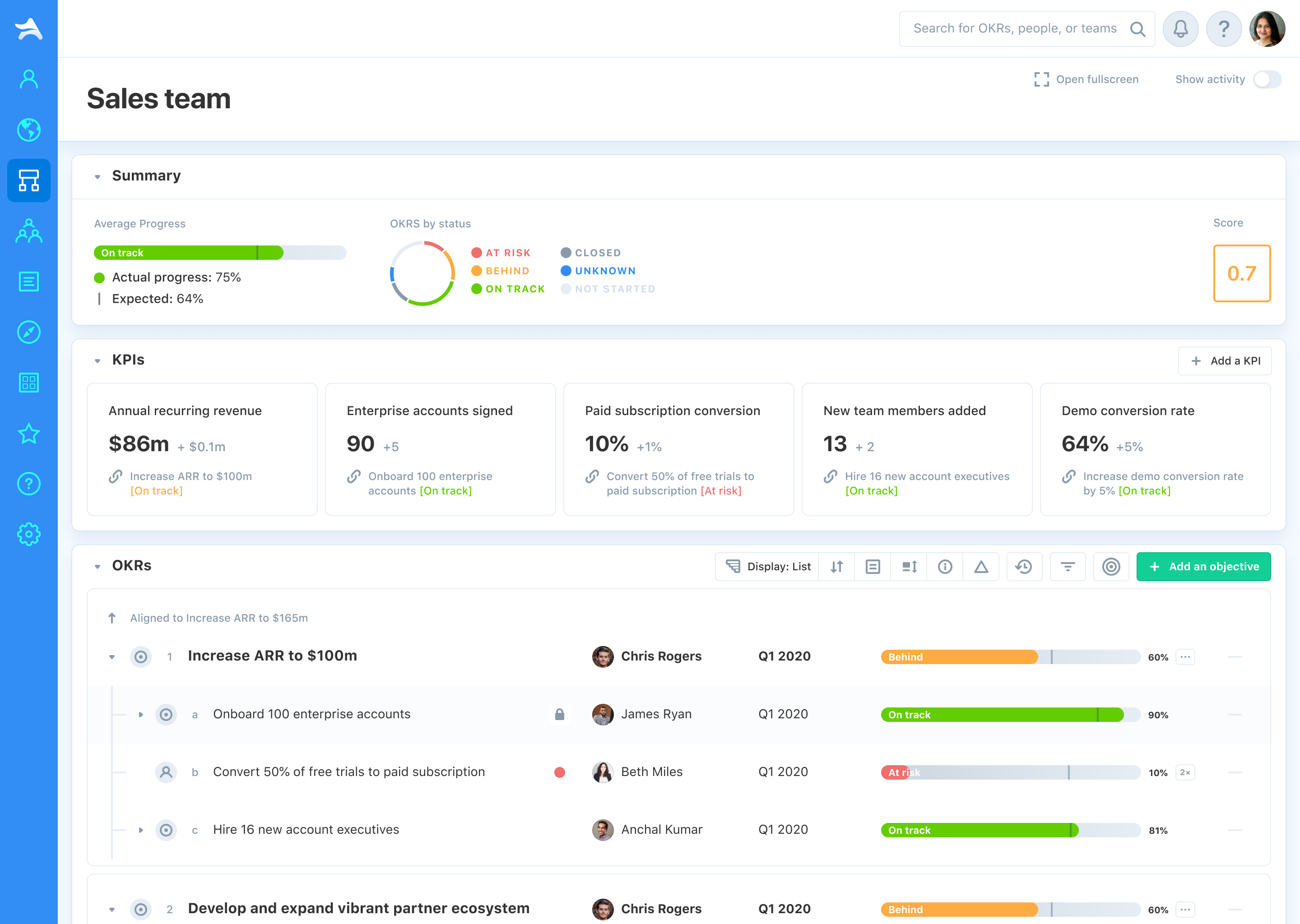 Vellore tells me that he has seen teams go from annual or bi-annual OKRs to more frequently updated goals, too, which is something that’s easier to do when you have a more accessible tool for it. Nobody wants to use yet another tool, though, so Ally features deep integrations into Slack, with other integrations in the works (something Ally will use this new funding for).

Since adopting OKRs isn’t always easy for companies that previously used other methodologies (or nothing at all), Ally also offers training and consulting services with online and on-site coaching.

Pricing for Ally starts at $7 per month per user for a basic plan, but the company also offers a flat $29 per month plan for teams with up to 10 users, as well as an enterprise plan, which includes some more advanced features and single sign-on integrations.