Lidar is a critical method by which robots and autonomous vehicles sense the world around them, but the lasers and sensors generally take up a considerable amount of space. Not so with Voyant Photonics, which has created a lidar system that you really could conceivably balance on the head of a pin.

Before getting into the science, it’s worth noting why this is important. Lidar is most often used as a way for a car to sense things at a medium distance — far away, radar can outperform it, and up close, ultrasonics and other methods are more compact. But from a few feet to a couple hundred feed out, lidar is very useful.

Unfortunately, even the most compact lidar solutions today are still, roughly, the size of a hand, and the ones ready for use in production vehicles are still larger. A very small lidar unit that could be hidden on every corner of a car, or even inside the cabin, could provide rich positional data about everything in and around the car with little power and no need to disrupt the existing lines and design. (And that’s not getting into the many, many other industries that could use this.)

Lidar began with the idea of, essentially, a single laser being swept across a scene multiple times per second, its reflection carefully measured to track the distances of objects. But mechanically steered lasers are bulky, slow and prone to failure, so newer companies are attempting other techniques, like illuminating the whole scene at once (flash lidar) or steering the beam with complex electronic surfaces (metamaterials) instead.

One discipline that seems primed to join in the fun is silicon photonics, which is essentially the manipulation of light on a chip for various purposes — for instance, to replace electricity in logic gates to provide ultra-fast, low-heat processing. Voyant, however, has pioneered a technique to apply silicon photonics to lidar.

In the past, attempts in chip-based photonics to send out a coherent laser-like beam from a surface of lightguides (elements used to steer light around or emit it) have been limited by a low field of view and power because the light tends to interfere with itself at close quarters.

Voyant’s version of these “optical phased arrays” sidesteps that problem by carefully altering the phase of the light traveling through the chip. The result is a strong beam of non-visible light that can be played over a wide swathe of the environment at high speed with no moving parts at all — yet it emerges from a chip dwarfed by a fingertip. 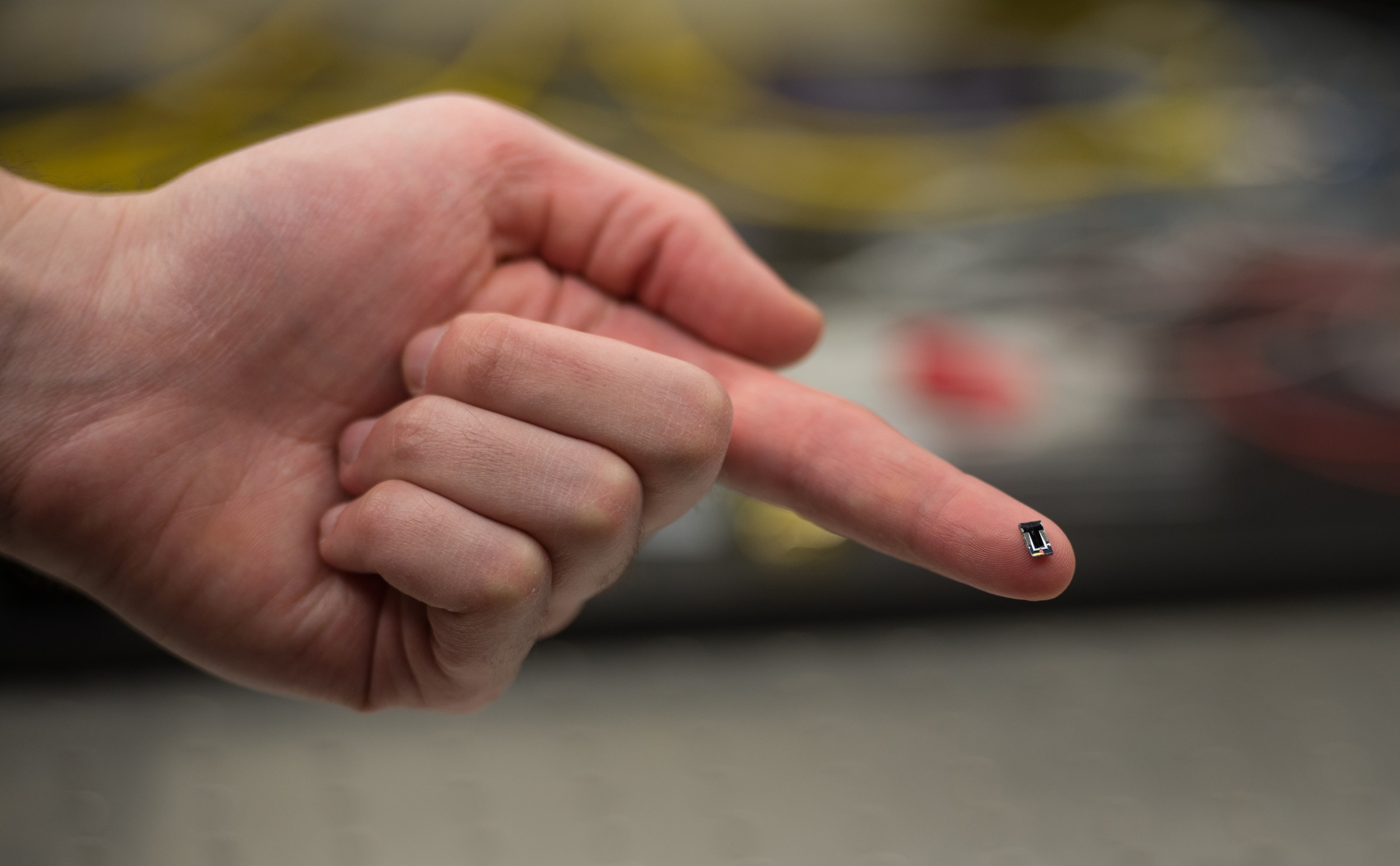 “This is an enabling technology because it’s so small,” said Voyant co-founder Steven Miller. “We’re talking cubic centimeter volumes. There’s a lot of electronics that can’t accommodate a lidar the size of a softball — think about drones and things that are weight-sensitive, or robotics, where it needs to be on the tip of its arm.”

Lest you think this is just a couple yahoos who think they’ve one-upped years of research, Miller and co-founder Chris Phare came out of the Lipson Nanophotonics Group at Columbia University.

“This lab basically invented silicon photonics,” said Phare. “We’re all deeply ingrained with the physics and devices-level stuff. So we were able to step back and look at lidar, and see what we needed to fix and make better to make this a reality.”

The advances they’ve made frankly lie outside my area of expertise, so I won’t attempt to characterize them too closely, except that it solves the interference issues and uses a frequency modulated continuous wave technique, which lets it measure velocity as well as distance (Blackmore does this as well). At any rate, their unique approach to moving and emitting light from the chip lets them create a device that is not only compact, but combines transmitter and receiver in one piece, and has good performance — not just good for its size, they claim, but good.

“It’s a misconception that small lidars need to be low-performance,” explained Phare. “The silicon photonic architecture we use lets us build a very sensitive receiver on-chip that would be difficult to assemble in traditional optics. So we’re able to fit a high-performance lidar into that tiny package without any additional or exotic components. We think we can achieve specs comparable to lidars out there, but just make them that much smaller.” 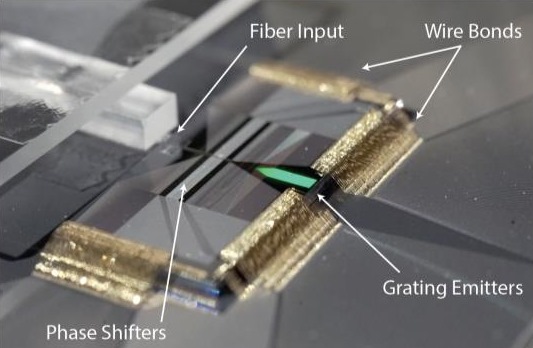 The chip-based lidar in its test bed.

It’s even able to be manufactured in a normal fashion like other photonics chips. That’s a huge plus when you’re trying to move from research to product development.

With this first round of funding, the team plans to expand and get this tech out of the lab and into the hands of engineers and developers. The exact specs, dimensions, power requirements and so on are all very different depending on the application and industry, so Voyant can make decisions based on feedback from people in other fields.

In addition to automotive (“It’s such a big application that no one can make lidar and not look at that space,” Miller said), the team is in talks with numerous potential partners.

Although being at this stage while others are raising nine-figure rounds might seem daunting, Voyant has the advantage that it has created something totally different from what’s out there, a product that can safely exist alongside popular big lidars from companies like Innoviz and Luminar.

“We’re definitely talking to big players in a lot of these places, drones and robotics, perhaps augmented reality. We’re trying to suss out exactly where this is most interesting to people,” said Phare. “We see the evolution here being something like bringing room-size computers down to chips.”

The $4.3 million raised by Voyant comes from Contour Venture Partners, LDV Capital and DARPA, which naturally would be interested in something like this.