Andreessen Horowitz is betting that there’s still a big opportunity in newsletters — the venture capital firm is leading a $15.3 million Series A in Substack.

To be clear, although Substack started two years ago as a way turn newsletters into a paid subscription business, it’s since added support for podcasts and discussion threads. As CEO Chris Best put it, the goal is to allow writers and creators to run their own “personal media empire.”

Writers using Substack include Nicole Cliffe, Daniel Ortberg, Judd Legum, Heather Havrilesky and Matt Taibbi. The startup says that newsletters on the platform have now amassed a total of 50,000 paying subscribers (up from 25,000 in October), and that the most popular Substack authors are already making hundreds of thousands of dollars a year.

Also, a16z’s Andrew Chen — a blogger and newsletter writer himself — is joining the Substack board of directors. In Chen’s view, the startup represents the combination of the old and the new, allowing writers to reach longstanding “passionate online communities” while also pursuing “a new way of doing micro-entrepreneurship,” where they make money directly from their audience.

“When you combine the two — wow, this is something special,” Chen said.

Y Combinator, where Substack was incubated, is also participating in the funding. 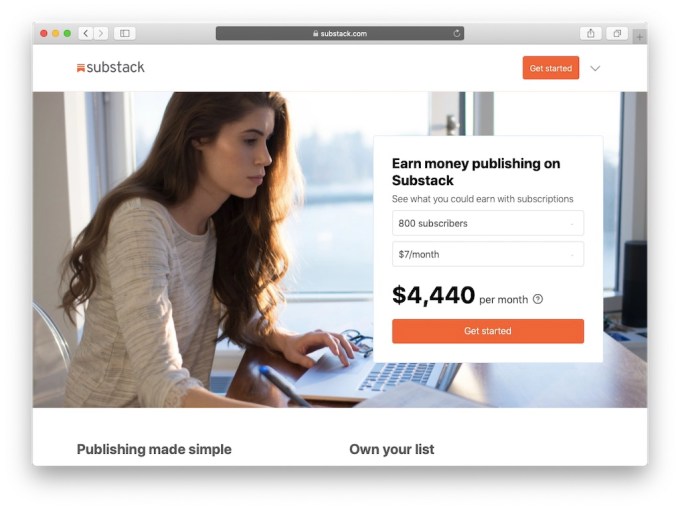 Best told me the team consists entirely of the three co-founders — CTO Jairaj Sethi, COO Hamish McKenzie and Best himself — “working out of my living room.” (The three of them are pictured above.) Even with the new funding, Best and McKenzie said they want to grow cautiously.

“We’re conscious of the writers depending on a reliable and stable Substack for their income,” McKenzie said. “We don’t want to go out there and do a bunch of crazy startup stuff.”

Still, they will be moving out of that living room and hiring a bigger team. Best also said they have plans to build more “writer success” tools that help creators get the most out of the platform, and to expand into other formats, like video.

Even as Substack grows, McKenzie said it will maintain a focus on subscription products for “people who are attracted to the idea of owning their relationship with their audience.” Best argued that this approach avoids the incentives that have pushed online news in the direction of “cheap outrage, attention and addiction.”

He added, “It’s just a better model for creating culture.”

As for whether the newsletter boom might eventually reach a saturation point, making it harder for new titles to find an audience, Best acknowledged that there’s probably “some finite limit” to the number of newsletters that most readers will subscribe to, but he said, “Even if that’s the case, it can still be a very successful model. The magical thing about paid subscriptions is that you don’t need to have millions of people in your audience.”