Substack started out by providing individual writers and publishers with a set of tools enabling them to charge a subscription fee for their newsletters. Now it’s giving them the ability to do the same thing with podcasts.

In fact, Morgan Creek Digital Assets founder Anthony “Pomp” Pompliano is already using the platform to introduce a daily podcast to complement his existing crypto-focused Off the Chain newsletter.

“We’ve always thought the magic of what Substack is doing is the fact that we’re disintermediating the people creating stuff and the people who are consuming it — you are the brand they’re paying for,” Substack CEO Chris Best told me. “That whole model works incredibly well for newsletters, and to us, there’s no reason why it wouldn’t be a great model for podcast content.”

Substack’s podcasting capabilities will allow publishers to either offer a podcast-specific subscription — or, like Pompliano, include it as part of a broader package with their newsletter subscription. The podcast itself will be distributed through an audio player that can be embedded in both newsletters and on the web.

A web-based audio player might seem like a clunky way to listen to podcasts, but Substack’s player (which you can try out here) works pretty smoothly and includes features like the ability to jump backward and forward 30 seconds, and to play podcasts at various speeds. 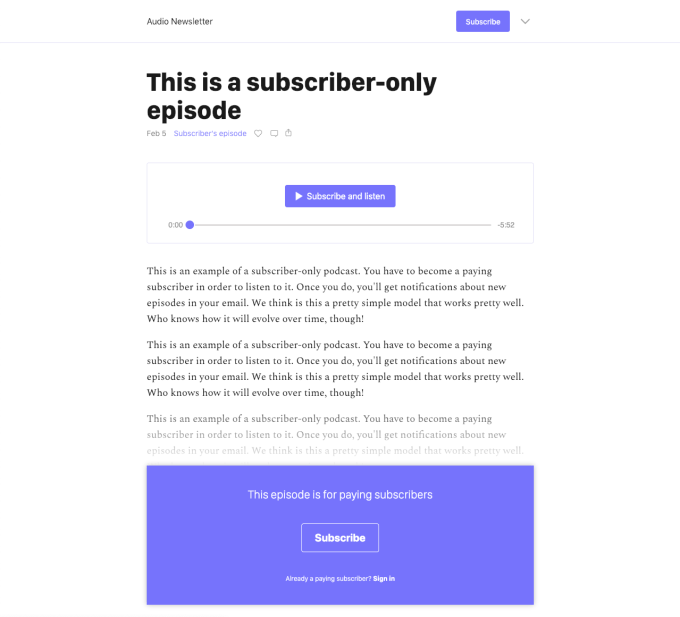 Best added that he’s also open to the idea of creating a private, subscriber-only feed that can be accessed by podcast apps.

“We’re going to put it out there and see what people want,” he said. But he argued that the “existing feed-based podcast system” is “not living up to its potential” when it comes to enabling podcasters to make money from subscriptions.

We spoke shortly after Spotify announced that it was acquiring podcast companies Gimlet and Anchor, which Best said illustrates the importance of a tool like Substack, because it’s focused on “empowering individuals”: “We let people get paid directly by people, rather than aggregated into a wider system.”

I also brought up the patronage model for supporting content creators enabled by Patreon (which is currently how I support one of my favorite podcasts).

“We definitely think the world is big enough for both of those things,” Best replied. While he expressed admiration for the Patreon model, he argued, “There’s also room for another kind of thing, where you say, ‘Hey, I’m doing this professionally, it’s my job, I do a good job with it and you should pay for it.'”

And Best doesn’t intend to stop with newsletters and podcasts. There are plans to support other media formats, although the exact timing will depend on Substack’s customers.

“We are hyper-focused on serving the authors that we’re working with,” he said. “The timing tends to depend on when we find people that want to do it. Why we did the podcast thing now [comes from] Pomp wanting to do it now.”

Crawling from the wreckage