Dish is expanding its hardware lineup today with the launch of a new 4K streaming stick, the AirTV Mini, designed to make it easier for cord cutters to access from one user interface its live TV service Sling TV, plus Netflix and over-the-air channels. The Android TV-powered device is meant to complement an existing setup that already includes an OTA digital antenna and an AirTV Wi-Fi-enabled network tuner, the company says.

For a limited time, new and eligible Sling TV customers can get the latter two items for free — an AirTV Wi-Fi-enabled network tuner and an indoor antenna — by prepaying for three months of Sling TV’s service.

In addition, the AirTV Mini also includes support for 2×2 802.11AC Wi-Fi, a lost remote finder feature, support for Google Assistant and Google Play, as well as support for VP94K decoding, which allows you to watch YouTube or Netflix content in 4K. 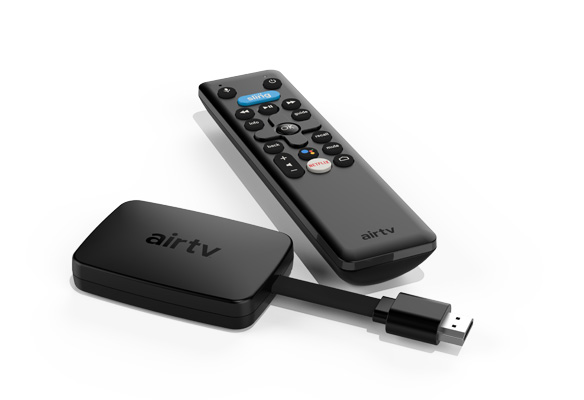 The company has been offering streaming devices for a couple of years. Dish first unveiled its AirTV Player, a 4K media streamer set-top box, at CES 2017. In 2018, it expanded its hardware lineup to include a new device, just called the AirTV, a networked TV tuner that streams local programming via Wi-Fi.

Despite the new AirTV Mini’s streaming stick form factor, it’s not meant to compete with rival streaming sticks like the low-cost Amazon Fire TV Stick, Roku streaming stick or Chromecast in terms of price. Instead, it’s a $79.99 alternative to the $119.99 AirTV Player bundle — perhaps for someone who doesn’t care for the sort of Playskool-inspired design of the original streaming box, but still wants over-the-air channels, 4K support and easy access to Sling TV and Netflix.

The remote for the Mini is improved as well, in a more typical shade of black instead of the AirTV Player’s white and blue design. It’s also a more standard length and width than the stubby and seemingly childish AirTV Player remote. And it still has dedicated buttons for Sling TV, Netflix and Google Assistant. 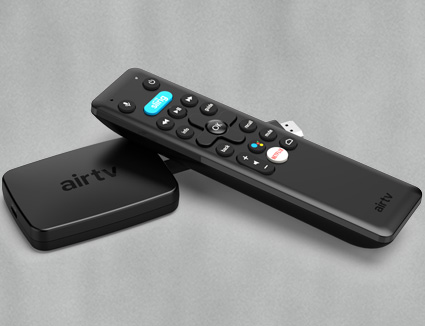 Through the remote, users can issue voice commands to control their TV experience. For example, you can use voice search to find favorite shows and movies, or say things like “go to guide,” “show me my DVR” or “rewind 10 seconds.”

“The AirTV brand is committed to making local TV relevant and easily accessible to streamers,” said Mitch Weinraub, director of product development for AirTV, in a statement. “The AirTV Mini is a powerhouse streaming stick with more memory and a faster processor than anything else in the category. When combined with the AirTV network tuner and the Sling TV app, the Mini delivers a superior streaming experience, especially for Slingers who want premium features in a small package at an affordable price.”

The audience for this sort of product — or any AirTV device, for that matter — is fairly niche. While there’s certainly some demand for access to over-the-air programming among cord cutters, there are other solutions that don’t lock you into Sling TV, specifically.

For instance, you can easily switch to your connected antenna from a Roku TV or you could buy the (currently $179.99) Fire TV Recast, which offers a Fire TV interface plus access to stream and record from live TV with its built-in DVR. Neither the AirTV Mini nor the AirTV tuner come bundled with a DVR — you have to provide your own, and plug it into the tuner.

Overall, the solution makes sense for DIY’ers who also subscribe to Sling TV and prefer a Google Assistant-powered experience instead of Alexa.

Correction, 7/19/19, 8 PM: The antenna bundle is only available to new customers. The article has been updated to correct this.