When Shomik Dutta and Betsy Hoover first met in 2007, he was coordinating fundraising and get-out-the-vote efforts for Barack Obama’s first presidential campaign and she was a deputy field director for the campaign.

Over the next two election cycles the two would become part of an organizing and fundraising team that transformed the business of politics through its use of technology — supposedly laying the groundwork for years of Democratic dominance in organizing, fundraising, polling and grassroots advocacy.

Then came Donald J. Trump and the 2016 election.

For both Dutta and Hoover, the 2016 outcome was a wake-up call against complacency. What had worked for the Democratic party in 2008 and 2012 wasn’t going to be effective in future election cycles, so they created the investment firm Higher Ground Labs to provide financing and a launching pad for new companies serving Democratic campaigns and progressive organizations.

“As the political world shifts from analog to digital, we need a lot more tools to capture that spend,” says Dutta. “Democrats are spending on average 70 cents of every dollar raised on television ads. We are addicted to old ways of campaigning. If we want to activate and engage an enduring majority of voters we have to go where they are (and that’s increasingly online) and we have to adapt to be able to have these conversations wherever they are.”

Social media and the rise of “direct to consumer” politics

While the Obama campaign effectively used the internet as a mobilization tool in its two campaigns, the lessons of social media and mobile technologies that offer a “direct-to-consumer” politics circumventing traditional norms have, in the ensuing years, been harnessed most effectively by conservative organizations, according to some scholars and activists.

“The internet is a tool and in that sense it’s neutral, but just like other communication tools from the past, people with more power, with more resources, with more organization, have been able to take advantage of it,” Jen Schradie, an assistant professor at the Observatoire sociologique du changement at Sciences Po in Paris, told Vox in an interview earlier this month.

Schradie is a scholar whose recent book, “The Revolution That Wasn’t,” contends that the internet’s early application as a progressive organizing tool has been overtaken by more conservative elements. “The idea of neutrality seems more true of the internet because the costs of distributing information are dramatically lower than with something like television or radio or other communication tools,” she said. “However, to make full use of the internet, you still need substantial resources and time and motivation. The people who can afford to do this, who can fund the right digital strategy, create a major imbalance in their favor.”

Schradie contends that a web of privately funded think tanks, media organizations, talk radio and — increasingly — mobile applications have woven a conservative stitch into the fabric of social media. The medium’s own tendency to promote polarizing and fringe viewpoints also served to amplify the views of pundits who were previously believed to be political outliers.

Essentially, these sites have enabled commentators and personalities to create a patchwork of “grassroots” organizations and media operations dedicated to reaching an audience receptive to their particular political message that’s funded by billionaire donors and apolitical corporate ad dollars.

“The last six years have witnessed millions and millions of dollars of private Koch money and Mercer money that have gone to pretty sophisticated data and media efforts to advance the Republican agenda,” says Dutta. “I want to even the scale.”

Dutta is referring to Charles and David Koch and Robert Mercer, the scions and founder (respectively) of two family dynasties worth billions. The Koch brothers support a web of political advocacy groups, while Mercer and his daughter were large backers of Breitbart News and Cambridge Analytica, two organizations that arguably provided much of the policy underpinnings and online political machinery for the Trump presidential campaign.

But there’s also the simple fact that Donald Trump’s digital strategy director, Brad Parscale, was able to effectively and inexpensively leverage the social media tools and data troves amassed by the Republican National Committee that were already available to the candidate who won the Republican primary. In fact, in the wake of Romney’s loss, Republicans spent years building up profiles of 200 million Americans for targeted messaging in the 2016 election.

“Who controls Facebook controls the 2016 election,” Parscale said during a speaking engagement at the Romanian Academy of Sciences, according to a report in Forbes.

Parscale, now the campaign manager for the president’s 2020 reelection campaign recalled, “These guys from Facebook walked into my office and said: ‘we have a beta … it’s a new onboarding tool … you can onboard audiences straight into Facebook and we will match them to their Facebook accounts,’ ” according to Forbes.

During the 2016 campaign, Hillary Clinton’s team made 66,000 visual ads, according to Parscale, while the Trump campaign made 5.9 million ads by leveraging social media networks and the language of memes. And in the run-up to the 2020 election, Parscale intends to go back to the same well. The Trump campaign has already spent more than $5 million on Facebook ads in the current election cycle, according to The New York Times — outspending every single Democratic candidate in the field and roughly all of the Democrats combined.

Dutta and Hoover are working to offset this movement with investments of their own. Back in 2017, the two launched Higher Ground Labs, an early-stage company accelerator and investment firm dedicated to financing technology companies that could support progressive causes.

The firm has $15 million committed from investors, including Reid Hoffman, the co-founder of LinkedIn and a partner at Greylock; Ron Conway, the founder of SV Angel and an early backer of Google, Facebook and Twitter; Chris Sacca, an early investor in Uber; and Elizabeth Cutler, the founder of SoulCycle. Already, Higher Ground has invested in more than 30 companies focused on services like advocacy outreach, polling and campaign organizing — among others. 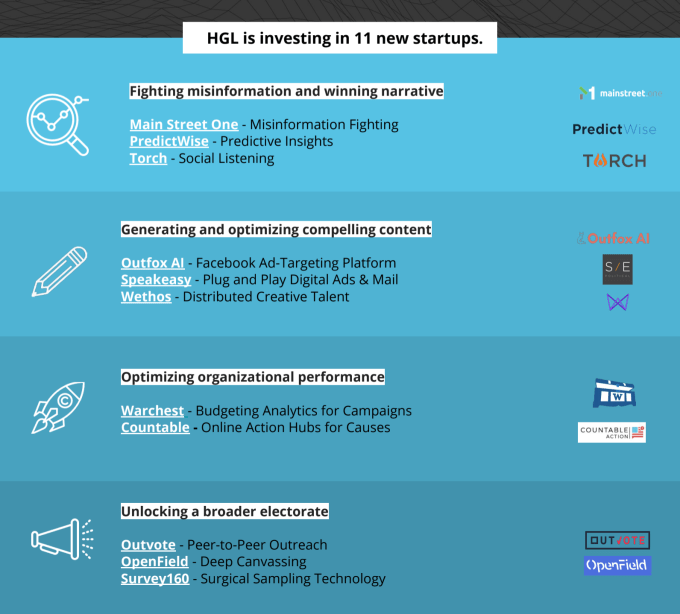 “It is vitally important that Democrats learn to do their campaigns online,” says Dutta. “The way you recruit volunteers; the way you poll sentiment; the way you target and mobilize voters has to be done with online tools and has to improve in the progressive movement and that’s the job of Higher Ground Labs to fix.”

For-profit companies have a critical role to play in election organizing and mobilization, Dutta says. Thanks to government regulation, only private companies are allowed to trade data across organizations and causes (provided they do it at fair market value). That means advocacy groups, unions and others can tap the information these companies collect — for a fee.

The Democratic Party already has one highly valued private company that it uses for its technology services. Formed from the merger of NGP Software and Voter Activation Network, two companies that got their start in the late 1990s and early 2000s, NGP VAN is the largest software and technology services provider for Democratic campaigns. It’s also a highly valued company, which received roughly $100 million in financing last year from the private equity firm Insight Venture Partners, according to people familiar with the investment. Terms of the deal were not disclosed.

“Our vision has been to build a platform that would break down the painful data silos that exist in the campaigns and nonprofit space, and to offer truly best-in-class digital, fundraising and organizing features that could serve both the largest and the smallest nonprofits and campaigns, all with one unified CRM,” wrote Stu Trevelyan, the chief executive of NGP VAN + EveryAction, in an August blogpost announcing the investment. “We’re so excited that others, like our new partners at Insight, share that vision, and we can’t wait to continue innovating and growing together in the coming years.”

Can startups lead the way?

Even as private equity dollars boost the firepower of organizations like NGP VAN, venture capitalists are financing several companies from the Higher Ground Labs portfolio.

Standouts like  Hustle, which raised $30 million last May, show that investors are buying into the proposition that these companies can build lasting businesses serving Democratic and progressive political campaigns and corporate businesses that would also like to rally employees or personalize a marketing pitch to customers.

Then there are earlier stage companies that are gaining significant traction both on the political and commercial circuits.

These are companies like Change Research, an earlier-stage company that just launched from Higher Ground Labs accelerator last year. That company, founded by Mike Greenfield, a serial Silicon Valley entrepreneur who was the first data scientist working on the problem of fraud detection at PayPal, and Pat Reilly, a communications professional who worked with state and local Democratic politicians, is slashing the cost of political polling.

“I wanted to do something for American democracy to try and improve the state of things,” Greenfield said in an interview last year.

For Greenfield, that meant increasing access to polling information. He cited the test case of a Kansas special election in a district that Donald Trump had won by 27 points. Using his own proprietary polling data, Greenfield predicted that the Democratic challenger, James Thompson, would pose a significant threat to his Republican opponent, Mike Estes.

Estes went on to a 7% victory at the ballot, but Thompson’s campaign did not have access to polling data that could have helped inform his messaging and — potentially — sway the election, said Greenfield.

“Public opinion is used to ween out who can be most successful based on how much money they’re able to raise for a poll,” says Reilly. It’s another way that electoral politics is skewed in favor of the people with disposable income to spend what is a not-insignificant amount of money on campaigns.

“It’s safe to say that most of the world was stunned by the outcome [of the presidential election] because most polls predicted the opposite,” says Greenfield. “Being a good American and as a parent of a 10-year-old and a 12-year-old, providing forward-thinking candidates and causes with the kind of insight they needed to win up and down the ballot could not only be a good business, but really help us save our democracy.”

“The way that I’ve described Change Research to investors is that we want to simultaneously move the world in a better direction and having a positive impact while building a substantial business,” says Greenfield. “We’re only going to work with candidates and causes that we’re aligned with.”

Being exclusively focused on progressive causes isn’t the liability that many in the broader business community would think, says Dutta. Many Democratic organizations won’t work with companies that sell services to both sides of the aisle.

For Higher Ground Labs, a stipulation for receiving their money is a commitment not to work with any Republican candidate. Corporations are okay, but conservative causes and organizations are forbidden.

“We’re in a moment of existential crisis in America and this Republican party is deeply toxic to the health and future of our country,” says Dutta. “The only path out of this mess is to vote Republicans out of office and to do that we need to make it easier for good candidates to run for office and to engage a broader electorate into voting regularly.”

UPDATE: An earlier version of this story mentioned Civis Analytics as a Higher Ground Labs portfolio company. That was incorrect.