Hustle 20X’d its annual revenue run rate in 15 months by denying clients that contradict its political views. It’s a curious, controversial, yet successful strategy for the startup whose app lets activists and marketers text thousands of potential supporters or customers one at a time. Compared to generic email blasts and robocalls, Hustle gets much higher conversion rates because people like connecting with a real human who can answer their follow-up questions.

The whole business is built around those relationships, so campaigns, non-profits, and enterprises have to believe in Hustle’s brand. That’s why CEO Roddy Lindsay tells me “We don’t sell to republican candidates or committees. What it’s allowed us to do is build trust with the Democratic party and progressive organizations. We don’t have to worry about celebrating our clients’ success and offending other clients.”

Investors agree. Tempted by Hustle’s remarkable growth to well over a $10 million run rate and 85 million conversations started, Insight Venture Partners has led a $30 million Series B for the startup that’s joined by Google’s GV and Salesforce Ventures.

The round comes just 10 months after Hustle’s $8M Series A when it was only doing $3 million in revenue. Lindsay says he was impressed with Insight’s experience with communication utilities like Cvent and non-profit tools like Ministry Brands. Its managing director Hilary Gosher who specializes in growing sales teams will join Hustle’s board, which is a great fit since Hustle is hiring like crazy.

Humanizing The Call To Action

Founded in late 2014, Hustle’s app lets organizers write MadLibs-style text message scripts and import contact lists. Their staffers or volunteers send out the messages one by one, with the blanks automatically filled in to personalize the calls to action. Recipients can respond directly with the sender ready with answers to assuage their fears until they’re ready to donate, buy, attend, or help. Meanwhile, organizers can track their conversions, optimize scripts, and reallocate assignments so they can reach huge audiences with an empathetic touch. 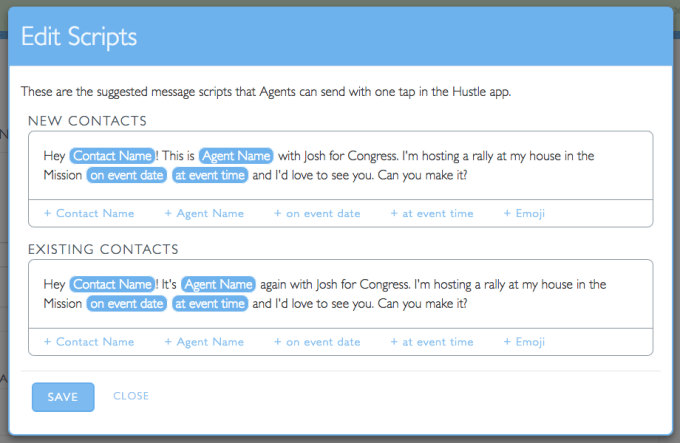 The app claims to be 77X faster than making phone calls and 5.5X more engaging than email, which has won Hustle clients like LiveNation’s concert empire, NYU, and the Sierra Club. Clients pay $0.30 per contact uploaded into Hustle, with discounts for bigger operations. Now at $41 million in total funding, Hustle plans to push further beyond its core political and non-profit markets and deeper into driving alumni donations for universities, sales for enterprises, and attendance for event promoters.

Hustle will be doing that without one of its three co-founders, Perry Rosenstein, who left at the end of 2017. [Disclosure: I know Lindsay from college and once worked on a short-lived social meetup app with Rosenstein called Signal.] Lindsay says Rosenstein’s “real excellence was about early stage activities and problems”. Indeed, in my experience he was more attuned to underlying product-market fit than the chores of scaling a business. “It was Perry’s decision, it was a departure we celebrated, and he’s still involved as an informal adviser to me and the company” Lindsay concluded. 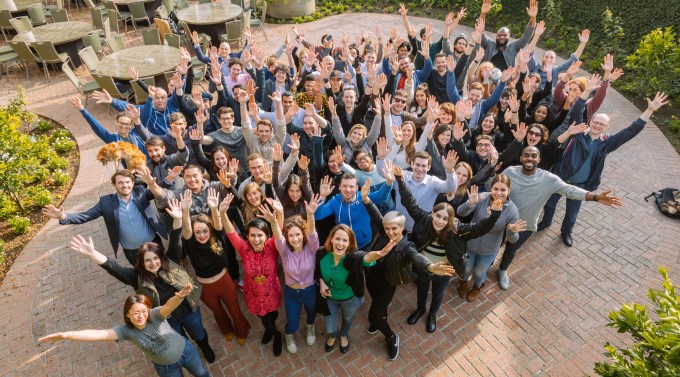 Hustle is growing so fast, this recent photo is already missing a third of the team

Hustle has over 100 other employees in SF, NYC, and DC to pick up the torch, though. That’s up from just 12 employees at the start of 2017. And it’s perhaps one of the most diverse larger startups around. Lindsay says his company is 51 percent women, 48 percent people of color, and 21 percent LGBT. This inclusive culture attracts top diverse talent. “We see this as a key differentiator for us. It allows us to hire incredible people” Lindsay says. “It’s something we took seriously from day one and the results show.”

What started as a favored tool of the Bernie Sanders campaign has blossomed into a new method of communicating at scale. “We’re massively humanizing the way these organizations communicate” Lindsay said. “Humans really matter, no matter if what you care about is getting lots of people to come to events, vote, or renew a season ticket package. Having a relationship with another person can cut through the noise. That’s different than your interactions with bots or email marketing campaigns or things where it’s dehumanized.”

Lindsay felt the frustration of weak relationships when after leaving Facebook where he worked for six years as one of its first data scientists, he volunteered for Mark Zuckerberg’s Fwd.us immigration reform organization. Its email got just a 1 percent conversion rate. He linked up with Obama’s former Nevada new media director Rosenstein and CTO Tyler Brock to fix that with Hustle. 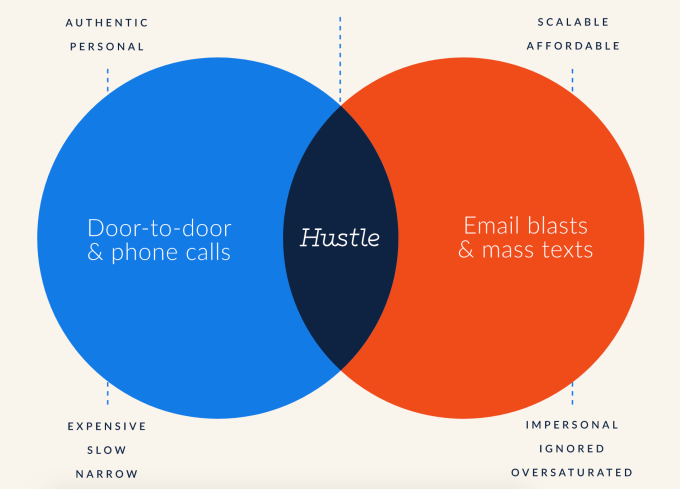 Working with Bernie aligned with the team’s political sentiments, but they were quickly faced with whether they wanted to fuel both sides of the aisle — which would mean delivering fringe conservative campaign messages they couldn’t stomach. Hustle still has no formal policy about declining Republican money, and a spokesperson said they point potential clients to TechCrunch’s previous article mentioning the stance. Meanwhile, Hustle is growing its for-profit client base to make shunning the GOP feel like less of a loss. Having Salesforce as a strategic investor also creates a bridge to a potential exit option.

Focusing on the left is working for now. Over 25 state Democratic parties are clients. Hustle sent 2.5 million messages and reached over 700,000 voters — 1 in 5 total — during the Alabama special election, helping Democrat Doug Jones win the Senate seat. 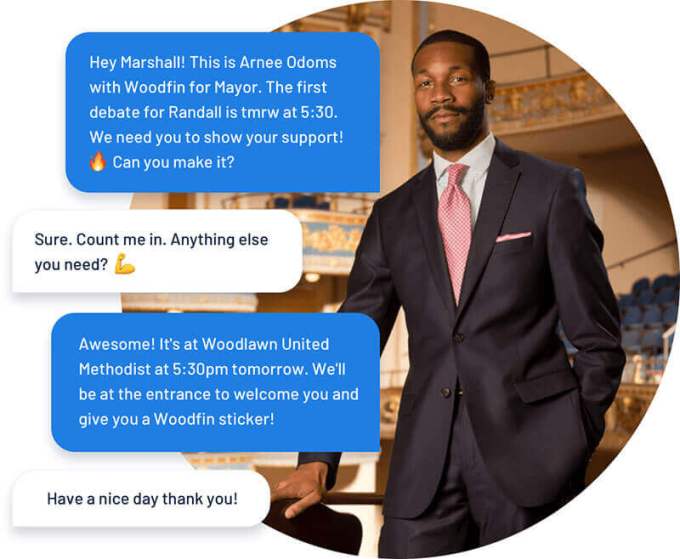 “Let’s build this great business for the Democratic party. Let’s let someone else take the Republicans” Lindsay explains. A stealth startup called OpnSesame is doing just that, Lindsay mentions. But he says “we don’t actually see them as competitive. We see them as potential allies that advocate for the power of p2p texting in getting everyone included in our democracy.” Instead, Lindsay sees the potential for Hustle to lose its sense of purpose and drive as it rapidly hires as its biggest threat.

Long-term, Hustle hopes to propel the right side of history by sticking to the left. Lindsay concludes, “You can really just put on your business hat and see this is a good choice.”