Apple today is introducing a new section in its Apple News application for iOS, iPad and Mac that’s designed to familiarize voters with the 20 U.S. Democratic presidential candidates ahead of the first Democratic debates hosted on June 26 and June 27 by NBC News, MSNBC, and Telemundo in Miami, Florida. The new guide is meant to provide a single place where readers can learn about a candidate’s biography, experience, and current position on key issues, among other things.

It will also feature photos and videos, along with recent coverage from trusted news sources.

Apple says that it will leverage a diverse set of news sources to provide this information, including ABC News, Axios, CNN, Fox News, NBC News, Politico, The Hill, The New York Times, The Wall Street Journal, The Washington Post, TIME, USA Today, Vox and others.

The candidate information is curated and organized by Apple’s team of News editors, and will be found in the Top Stories section of its Apple News app. 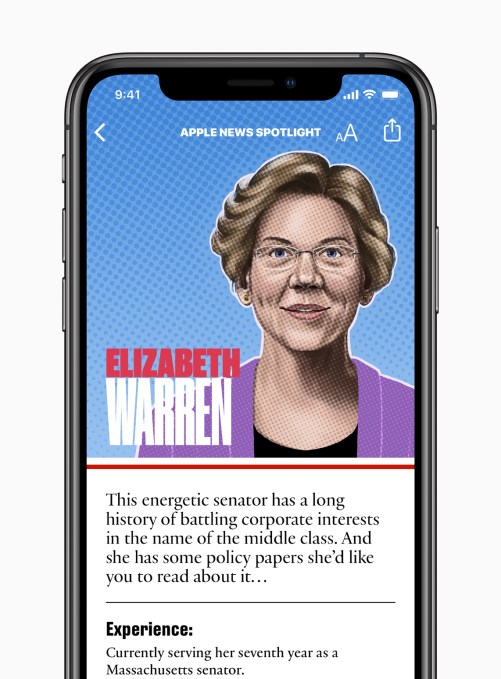 As the debates begin, the section will expand from being only a guide to candidates to being a hub for updates from the debates, too. It will then include articles and video highlights from NBC News, as well as fact-checking, reactions, and key onstage moments and takeaways, says Apple in an announcement about the new feature.

The hub will continue to be updated after the debates, as well, with more news throughout the campaign.

In addition, users can personalize their experience by tracking their favorite candidates in Apple News. To do so, they’ll just click the “follow” button for the candidate in the app, then will receive any breaking news around that candidate as well as see ongoing news coverage about the candidate appear in their Apple News Today feed and elsewhere within the News app.

This isn’t the first time Apple has involved itself in helping curate and organize election-related information. Most recently, it launched a real-time news hub for the 2018 Midterms.

Similar to its earlier efforts, the new hub isn’t just text and media. It also includes helpful infographics to better understand key points — like how much money a candidate has raised and how that compares others, for example.

The hub also presents the necessary info in a very readable style, with sections like “You know him/her for:,” “Breakout moment:,” “You’ll love him/here if you…,” “You’ll leave him/her if you…”, and “You probably didn’t know that…” 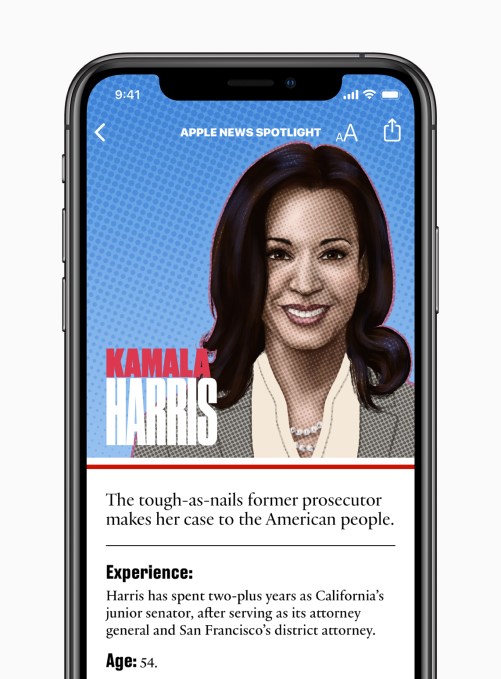 Apple has taken the opposite approach from Facebook when it comes to providing easy access to news and information to its users. Facebook fired its news editors then turned its “trends” section over to an algorithm, before giving up and killing it altogether. But Apple has instead hired an editorial team of former journalists to organize and curate the news that tens of millions of people read. The News team doesn’t write its own stories, but plays a large role in selecting the stories that people first see when they open the app.

The result is an easy-to-use app designed with Apple’s aesthetic, where journalism gets top billing — not clickbait, viral news, and intentional sources of disinformation.

“The 2020 Democratic field is complex, and we want to offer Apple News readers a trusted place to learn more about candidates they’re familiar with and those they may be hearing about for the first time,” said Lauren Kern, editor-in-chief of Apple News. “The candidate guide in Apple News is a robust and reliable resource, connecting readers to valuable at-a-glance information and to great journalism from our partners.” 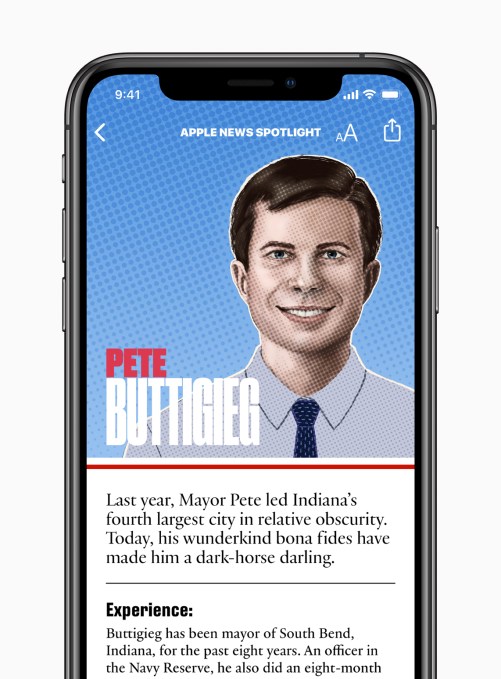