Earlier this year, Google announced plans to build a Chromebook App Hub designed to help teachers and other curriculum administrators more easily find educational tools and apps to use in the classroom. Today, as a part of Googe’s educational announcements at ISTE 2019, the company officially launched the App Hub with content from Epic!, Adobe, Khan Academy and others. It also unveiled new product features in Quizzes in Google Forms, Classroom, Course Kit and more.

As Google previously explained, teachers today often surf the web to seek new ideas and activities to help them create their lesson plans. Meanwhile, curriculum specialists field special requests from teachers but are tasked with making sure the programs requested meet the district’s policies.

The Chromebook App Hub aims to address both these scenarios by offering a place for educators to discover ideas and resources, as well as learn how they can be implemented in the classroom and if they meet district policy. 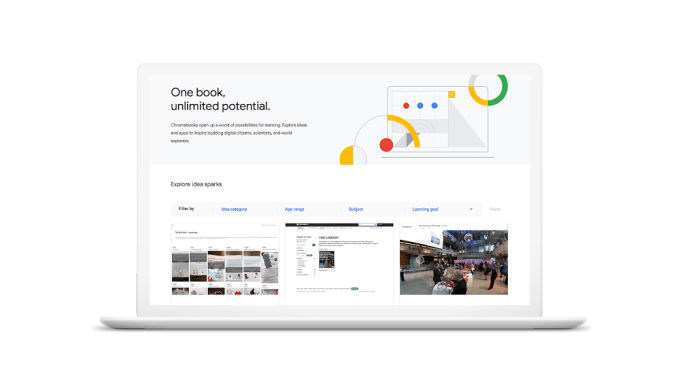 Google worked with the EdTechTeam to help gather the ideas around apps, it says.

It also worked with the nonprofit Student Data Privacy Consortium (SDPC) to help app developers better consider the data privacy aspects of their products. That way, the districts would be able to find the appropriate solutions that meet their own privacy requirements.

“The SDPC is proud to work with [the Chromebook App Hub] to provide transparency and openness around the critical aspects of schools, states, and vendors securing learner information,” says Dr. Larry L. Fruth II, CEO of A4L/SDPC, in a statement.

At launch, Epic! will contribute to the App Hub its library of children’s books, videos and games; Adobe will include its visual storytelling app Adobe Spark; and Khan Academy will bring its free library of lessons across subjects like math, grammar, science, history, standardized tests and more.

The ultimate goal, of course, is to better establish the Chromebook’s presence in the classroom, as App Hub’s apps and activities are designed to run on the Chromebook computers.

Schools and classrooms are a newer battleground for devices, with Google, Microsoft and Apple all investing in various initiatives in the K-12 market.

Last year, for example, Apple introduced a new iPad designed to help it catch up with Google, and win over more school districts. At its developer conference earlier this month, Apple also showed off new features for its educational framework ClassKit and its free app for teachers, Schoolwork.

However, Google’s Chromebook is dominating the U.S. K-12 market because of its simplicity, price and  IT department tools. As of 2017, it had 58% of the market, versus 22% for Microsoft Windows and 19% for Apple.

In addition to the launch of App Hub, Google launched a beta program for teachers that lets them create a rubric and attach it to an assignment, so students know how their work will be graded. The rubrics can be created in both Classroom and Course Kit.

It also launched tools that let teachers lock Quizzes in Google Forms on managed Chromebook so students can’t navigate away until they submit their answer. And it says it will soon introduce a feature that allows teachers to import questions from previously used Forms into new ones.

Google is also launching an updated version of Gradebook that offers a more holistic view of student progress plus an early access program that lets teachers sync grades from Classroom to the School Information System (SIS). The early access beta program will be available to schools this summer, with Infinite Campus and Capita SIMS as initial partners, with more to come.