Google’s Area 120 team, the company’s in-house incubator for some of its more experimental projects, today launched Game Builder, a free and easy to use tool for PC and macOS users who want to build their own 3D games without having to know how to code. Game Builder is currently only available through Valve’s Steam platform, so you’ll need an account there to try it. 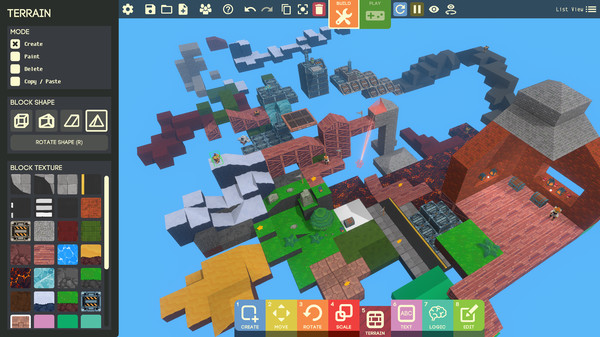 After a quick download, Game Builder asks you about what screen size you want to work on and then drops you right into the experience after you tell it whether you want to start a new project, work on an existing project or try out some sample projects. These sample projects include a first-person shooter, a platformer and a demo of the tool’s card system for programming more complex interactions.

The menu system and building experience take some getting used to and isn’t immediately intuitive, but after a while, you’ll get the hang of it. By default, the overall design aesthetic clearly draws some inspiration from Minecraft, but you’re pretty free in what kind of game you want to create. It does not strike me as a tool for getting smaller children into game programming since we’re talking about a relatively text-heavy and complex experience.

To build more complex interactions, you use Game Builder’s card-based visual programming system. That’s pretty straightforward, too, but also takes some getting used to. Google says building a 3D level is like playing a game. There’s some truth in that, in that you are building inside the game environment, but it’s not necessarily an easy game either.

One cool feature here is that you can also build multiplayer games and even create games in real time with your friends.

Traditionally, drag-and-drop game builders feel pretty limited. The Area 120 team is trying to overcome this by also letting you use JavaScript to go beyond some of the pre-programmed features. Google is also betting on Poly, its library of 3D objects, to give users lots of options for creating and designing their levels.

It’s no secret that Google is taking games pretty seriously these days, now that it is getting ready to launch its Stadia game streaming service later this year. There doesn’t seem to be a connection between the two just yet, but I wouldn’t be surprised if we saw Game Builder on Stadia, too.